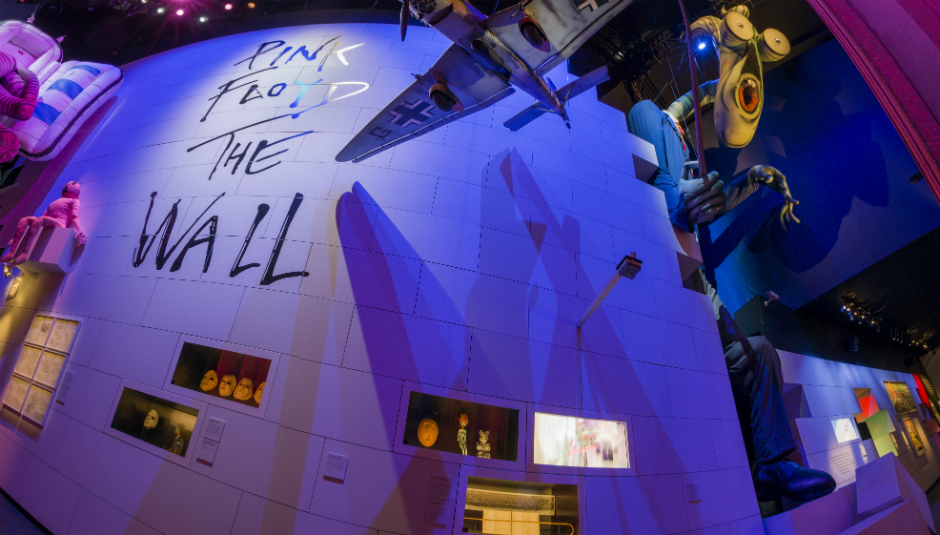 For a band whose album sales have exceeded 250 million, surprisingly little is known about the members of Pink Floyd, now the subject of a fascinating new exhibition at the V&A Museum titled Their Mortal Remains. Appearing on just two album covers, their 1967 debut The Piper At The Gates Of Dawn and 1969’s Ummagumma, by the time 1973’s Dark Side Of The Moon and 1980’s The Wall were released, the band were either sending musicians on stage in rubber Pink Floyd masks or hiding behind such elaborate art and set designs that they were almost invisible as a band. It is perhaps John Peel’s words, place fittingly at the start of the exhibition, that sum Pink Floyd up best: “They could have joined the audiences at one of their gigs without being recognised.”

Pink Floyd have always trod a delicate line between self-concealment and perceived arrogance: is hiding away a genuine wish to let their art speak for itself, or is it a certain pomposity that comes with being one of the world’s biggest bands? No one seems to know for certain, but their anonymity is something which, according to Victoria Broakes (Senior Curator at the V&A) makes the exhibition even more fascinating. “One of the interesting things about Pink Floyd is that they’re not particularly well known as individuals,” Brooks says. “They presented themselves through their music, performance, animation and art, which is why they’re ideal for an exhibition like this.”

Vast and ambitious in scope, the exhibition takes a chronological journey through the band’s impressive oeuvre, from their humble beginnings as an underground psychedelic band to their grandiose final performance at Live 8 in 2005. Telephone boxes packed full of historical artifacts help to socially situate the band’s music across their fifty-year history whilst also linking to the theme of communication so prevalent across their work. This is much more than a mere historical journey though; this is an extensive exploration of the band’s work through their many creative lenses. If Pink Floyd did choose to hide, they did so behind some of the most imaginative lenses they could – be it literary, artistic, architectural, or musicological.

The exhibition opens where the story began, in the back of a Bedford van which took the group from gig to gig. This is no ordinary Bedford van, however, being instead a giant oversized psychedelic van that takes you into the larger than life underworld of the 1960’s basement bars where Pink Floyd made their name. Posters from their stint as the house band at the UFO club in London adorn the walls as loud, psychedelic era Floyd plays through an impressive GuidePORT headphone system, helping to fully immerse you into the trippy world of early Floyd.

It was a world, of course, largely shaped by original Pink Floyd frontman, the late Syd Barratt. Widely regarded as the creative catalyst and songwriting brain behind the band, his untimely and brutal descent into psychosis has been well documented. The exhibition, however, provides a more composed exploration. There is a letter from the producer of BBC’s Saturday Club demanding an explanation about the member of the band who walked out of the show, mid-recording, together with some sporadic examples of Barratt’s more outlandish writing and art. 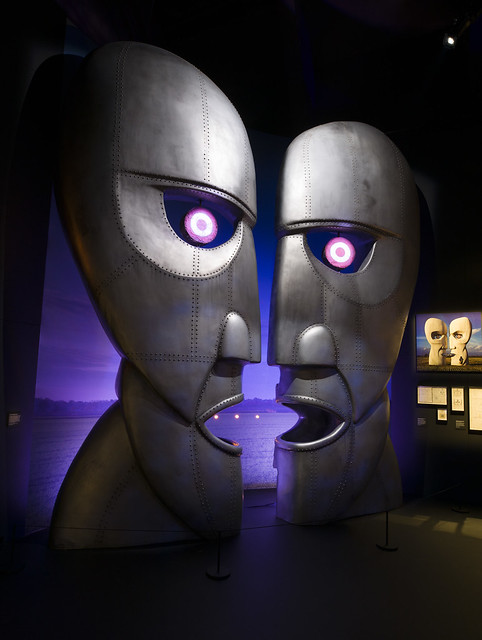 The true nadir of Barratt’s psychosis isn’t really touched on, with the exhibition drawing you instead to delicate handwritten love letters to his girlfriend or early footage of the band’s impressive performances with Barratt at the helm. It could be a conscious decision to concentrate on his genius, or a need to draw attention away from the negative press their treatment of Barratt brought – either way, it’s a troubling but understandable absence; the criticism of the band’s behaviour towards Barratt is a dark period in their history.

Barratt’s psychosis grew worse and by the time of 1969’s Ummagumma, he was in the middle of a crippling emotional and mental breakdown. Rather than give Barratt the rest his illness demanded, the band supposedly kept him on to write the songs they needed before leaving him out of the line-up altogether. Deciding not to pick him up on the way to a gig, David Gilmour was brought in full time and Barratt was out in a decision that brought the band much animosity, perhaps illustrated most famously when Michael Stipe met bassist, vocalist, and songwriter Roger Waters. Stipe famously turned his back and refused to speak to Waters before later playing an acapella version of Barratt’s ‘Black Globe’ on stage with REM later that night. “It might have been his way of saying ‘Syd was alright but you’re an arsehole'”, Waters later said.

The exhibition moves quickly forward onto Pink Floyd’s studio years, charting their quest to become an albums band. Showing a perception beyond their years, the band realised the future of music was in albums, not singles; they subsequently became one of the first bands to pioneer the concept album after The Beatles Sergeant Pepper in 1967. 1973’s Dark Side Of The Moon was arguably the band’s seismic shift from underground psychedelic experimenters to prog-rock art band. It was a journey helped significantly by the pioneering work of Aubrey ‘Po’ Powell and the late Storm Thorgerson who made up the Hipgnosis artistic team, bringing about one of the most successful musical and artistic collaborations in history and one recreated here through their notable involvement in the design of the exhibition. 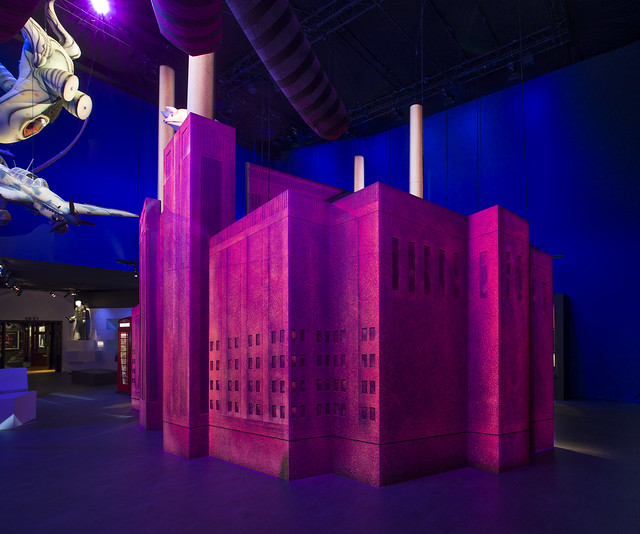 Known for their inventive stage work at the UFO club in the late 1960’s, Pink Floyd wanted to combine art, light and image in theatrically daring ways, but it wasn’t until Dark Side Of The Moon’s release that the band executed this to the level they had always visualised – something that can be seen through the exhibition’s inclusion of the band's extensive early sketchbooks and blueprints. An entire darkened room at the V&A is devoted to its iconic album artwork where viewers are treated to a captivating, almost hypnotic 3D prism visualisation accompanied by music from the album. Its simplicity is both profound and overwhelming, and possibly one of the finest inclusions in an exhibition of this nature.

Whilst the prism is what most people visualise when they think of Pink Floyd, the rest of the band’s artwork was no less pioneering. Included are videos, stills, and time-lapse photography showing the creation of the man in the flaming jacket on ­1975’s Wish You Were Here as is the giant, inflatable pig that flew alongside Battersea Power Station on the Orwellian inspired Animals from 1977. Three of the members - Roger Waters, Nick Mason, and Richard Wright - were all architecture students at London’s Regent Street Polytechnic during the early 1960’s. In a 1971 edition of the now defunct Melody Maker, a journalist noted that “their choice of material was very much to do with what they were thinking as architecture students”. One of the triumphs of the exhibition is to reveal the extent of the band’s architectural involvement with stage and set design.

Highlights include a 3D parallax installation of Battersea Power Station, the giant mirror ball and metallic heads from The Division Bell tour, and the lightbulb suits from 1983’a Delicate Sound of Thunder. A giant, oversized headmaster puppet with a cane next to a 22-metre-long wall section show the scope of their architectural imagination on 1980’s The Wall tour, perhaps the most iconic performance of which came ten years later after the fall of the Berlin Wall when the band played in 1990 at the Potsdamer Platz, Berlin.

The exhibition’s musicology room is every musician’s wet dream, with over 23 bays packed full of Pink Floyd’s instruments and studio equipment. Visitors can see Gilmour’s famous black Stratocaster on display together with a Hammond organ played by Wright and Waters’ beautiful 12 string Ovation. The band’s experimentation with sound through new technology was a key marker of the band’s ultimate innovation and examples of the oversized pedal boards, echo machines, and synths together with filmed interviews and videos reveals more about the band’s quest to discover and create new sounds – and, perhaps most interestingly for the exhibition – more about them as individuals too. 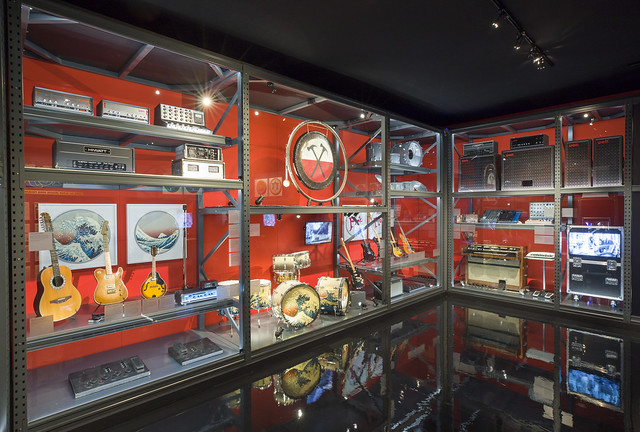 The literary influences on Floyd’s songwriting are uncovered throughout the exhibition; a stunning Peter Blake illustrated Alice In Wonderland shows the band’s fascination with absurdity, as does the inclusion of The Wind In The Willows, a chapter from this giving the band their first album title. Later, more political writings became a greater influence, such as George Orwell’s Animal Farm. In the 1970’s, The Sex Pistols were the band who everyone rightly associated with outspoken political commentary – even rallying against Pink Floyd themselves as John Lydon wore his famous ‘I HATE Pink Floyd’ t-shirt. A replica of it is included here, alongside Floyd’s increasingly political lyrics and Jamie Reid’s original artwork for Never Mind The Bollocks, Here’s The Sex Pistols, suggesting that whilst the delivery of their respective message was indeed very different, their sentiment perhaps held more in common than either band ever realised.

Like the Barratt years, little is included about Water’s bitter 1985 split from the band, in keeping with their seeming tetchiness regarding the not so neat periods of their history. There is a notable gap in the exhibition between their last album with Waters and what follows, perhaps reflecting one of the most painful arguments to occur in rock history. The end of the exhibition features an impressive performance space to listen to the band’s final, reunited performance of ‘Comfortably Numb’ at Live 8 where a poignant, if very awkward, hug takes place between the band at the close.

It functions as a good metaphor to sum up the band in public and perhaps in life; Pink Floyd were always at their best when their art, rather than they themselves, did the talking. Their Mortal Remains is a fitting balance between the two; whilst anonymity will always be synonymous with Pink Floyd, exploring their work through all their different creative lenses is ultimately where most can be gleaned about them as individuals.

Their Mortal Remains runs until October 1 at London's Victoria and Albert museum. For more information, and to buy tickets, please visit the exhibition's official website.