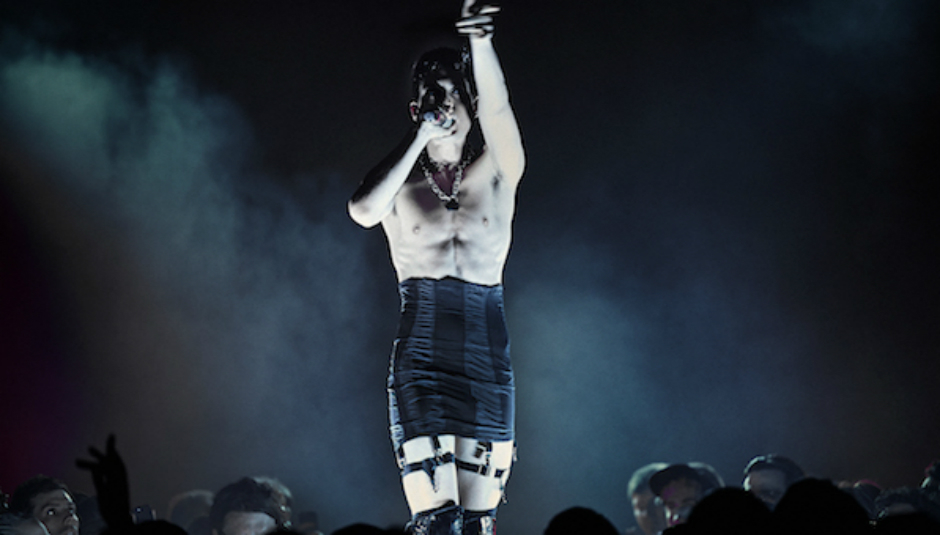 I'm not going to lie. It would be a lot easier for me to fill this space with a glowing review of Slowdive's show at The Hague's Rewire Festival. If I have come to know Rewire correctly over the years, this event perpetually pushes the visitor into the deep end. As great as Slowdive are, their 90-minute performance – a riveting trip down memory lane – wasn't exactly unruly. The three new songs they played, however, do signify their growth as artists and human beings over the past two decades. Which is as radical as a band in their disposition would allow it, with all due respect.

But enough about Slowdive: their show met my expectations and then some. So regardless of what else comes my way, this Rewire night is already a slam dunk for yours truly. With the likes of Blanck Mass and Arca & Jesse Kanda still playing, the ol' comfort level is pretty much at its zenith. The new miles on my soul are spent by immersing into more visceral, immediate sonic concourses. The former didn't disappoint by the way: Benjamin John Power's showing was a widescreen, militant affair. With Fuck Buttons, the mounting, jarring tension of the music is generated by Power playing off pal Andrew Hung. Without Hung as anchor and vice versa, Blanck Mass becomes this unchecked blight of emotional debris, shapeshifting impulsively between harrowing and meditative states.

I figured the transition between Blanck Mass and Arca would be a seamless one. Both of these artists rejoice in warping and distorting familiar states of being into intense, sometimes even unnerving ambiguity. Both have employed the snarling imagery of man's best friend. The difference is: Alejandro Ghersi isn't as shy to associate his art directly to his identity as a person. The Venezuelan producer and artist stands at the vanguard of electronic artists embracing gender binaries, sexual promiscuity, and free-form performance. In his young life, Ghersi worked with artists as generation defining as Björk and Kanye West, so his status as the evening's headliner act is a given.

Arca's latest work on his forthcoming self-titled LP puts his own person into the limelight even more. Unapologetically so. He has become a fresh, not to mention bold, antithesis of trite electronic IDM producer tropes: someone dressed in a black hoodie trying to look like the grim reaper, face obscured in anonymity on press shots. The video for 'Reverie' emits the desolately diffused neon hue of some back room at a strip club, with Arca objectifying his own physicality in, let's just say, not always ingenuous ways. The song itself, by contrast, is an absolutely stunning, sensual piece of music.

The use of Ghersi's voice is very interesting too: operatic, but pitched down to the point that it’s stripped of all its theatrical features. It serves merely as an additional instrumental layer, lyric-less vowels, much like Liz Fraser used to do. I'd take Arca for someone with a coy sense of humor. His 'Reverie/Saunter' 12-inches are packaged with fishnet stockings, which could be considered a playfully promiscuous gesture. Once you wear one of those things, all skin blemishes and imperfections become streamlined into an object of grace, and that's what Arca appears to be aiming for sonically too.

Tonight's performance with Jesse Kanda, childhood compadre and his visual extension, is met with a great expectations. Based on his current body of work, people were bracing for a radical visual extravaganza, a show that would transcend and blur the line between immersive musicianship and performance art in as similarly baffling fashion as The Knife's Shaking The Habitual tour de force. I deem Arca certainly capable of pulling it off, given his current status quo and reputation as a contrarian.

Instead, Arca comes on stage wearing casual clothes: jeans and a T-shirt. If he’s wearing fishnets underneath, we wouldn't know it. Same with Kanda, who stands behind his laptop, beaming a plethora of moving images onto a projection screen. Peculiarly enough, this set-up looks like two buddies working matter-of-factly in a humdrum rehearsal, not the metaphysical all-encompassing show many people were craving to experience.

Nevertheless, Arca still manages to pull off one of the most thought-provoking shows I've seen in my life. If Slowdive had opted to only play new songs, I would be torn up about it, especially after amping myself up to go see them for a week. But Arca, to be frank, is not a musician I have familiarized myself with in-depth up to this point, so I'm completely open-minded for whatever he and Kanda have in store tonight. Regardless of what state you're in, Arca begins in challenging fashion: he slips between robust cavernous break beats, hell-bent for leather. He's not giving much for the crowd to work with, unless you consider confusion something to revel in.

The videos Kanda chooses seem totally at random, albeit with one common aesthetic: it's either gruesome, droll, or horrific to look at. Often and obviously, there's a deliberate chasm between what we see and what we hear. It's easy to picture Ghersi and Kanda gleefully conspiring on-the-fly, searching YouTube with terms like "fat people underwater", "holy cow", "burning forest at night" or "cancerous sore". Press play with a sense of 'why not' and see what happens, that's basically what it comes down to.

With Kanda and Ghersi's close friendship in mind, this loose, reciprocal approach makes the show all the more compelling. Instead of becoming overwrought in setlist build-ups and choreography, this looks like two people pulling the weight from their shoulders and applying a sense of fun by abandoning the script completely. Arca and Kanda use the stage to communicate that sense of fun with the audience, and this really gives their show a whole other dimension. As the intensifying barrage of sheer rhythm becomes a bit too unbearable, I walk to the back of the room to gather myself. Exactly there and then, Arca ups the ante by switching to blood-pumping unadulterated club music.

By now, a good chunk of the audience has left the scene. Those who stuck around were clearly enjoying the absurd prospect of dancing and shaking whilst watching a baby calf emerge from its mother's uterus. Arca applies his virtues as an electronic musician in varying degree: sometimes he puts the screws on tight, other times he reels off a bona fide hip hop medley. It's as if he makes the stage his personal living room, and we're welcomed in to have a candid look.

Throughout the performance, Ghersi looks very much like he's inhabiting his own natural train of thought. He appears to be very relaxed, but at the same time, he confesses to the audience that he "feels very fragile today". After walking around in a string and baring his voice the day before in Milan , veering into a more introspective place might be the boldest, most honest reaction he could give. He offers us a tiny glimpse into his inner fascinations, exposing himself to that vulnerable Big Brother-candidness.

All in all, Arca's show injected some much-needed perspective, especially after seeing Slowdive a few hours before. Who knows, maybe I’d be complaining now if Slowdive had employed that stage in a similarly maverick way as Ghersi. It begs the question of what an artist owes the audience. There’s a plethora of examples, be it Low doing a full-on drone set, Death Grips’ [no show] (http://www.stereogum.com/1428802/deconstructing-death-grips-no-show-live-show-and-what-we-expect-from-concerts/franchises/deconstructing/) or Kanye West’s strange self-exorcism at Glastonbury.

Not catering to expectation will always split things down the middle, and ultimately, that is healthy. You have to at least admire Arca’s open, joie de vivre appeal to the crowd's own course of action and reaction. I believe this all boils down to sheer empathy for others, in maybe the most unabashedly brutal way. Which is absolutely wonderful.

Regardless of what you make of Arca's bizarre show, at the very least he makes you reflect on your own limits, desires, and flaws, and how you choose to adhere to that. Lately, I've been a regular visitor at a performance bar in Rotterdam. By doing so, I've become increasingly inspired by the way performance artists subvert the element of shame to empower themselves and their surroundings. It can be something completely ridiculous: pouring ketchup over your face, or stuffing your bra full of bananas, like Josephine Baker used to do.

All in all, an artist can harness freedom of expression without trying to force-feed the audience something austere or contrived to singular intent or artistic fulfillment. In its own way, the beauty of circumstance holds an important weight in our existence, and Arca's strange, unnerving but eye-opening performance attests to that sentiment. In the end, a gift is about the act of giving, not about the object you acquire.

In a Band? You Need to Check Out Wash...