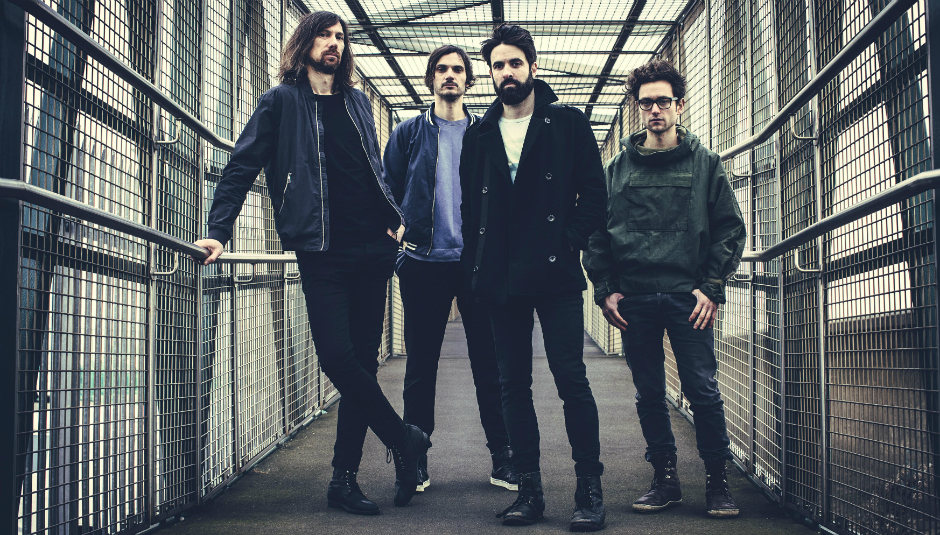 A darker beast than their 2012 debut Ways To Forget, the distinctive sound of Clock Opera — the agile alto voices, a sleek and supple rhythm section, immaculate production — is still present, but there's a marked shift in lyrical tone. A lot of the album is about loss, absence, holes, haunting, and questioning identity. To be specific, the majority of the songs were inspired by a miscarriage, and a lot of the others were driven by the fallout from it. Although a darkly cerebral and grief-ridden record in theme, Venn is as uplifting as it is sinister, and ghostly, menacing, and euphoric in equal measure.

I spent a lot of the time writing this album feeling enveloped in fog, so when we made these samples it resonated with me at once. Our first album was sonically busy and we wanted to step away from that. It’s about being judged on who you are vs what you were vs what you were expected to be vs what you might end up being. Pretty easy to get lost on those paths, especially if your compass if already spinning. Also, I was thinking about how we are collectively undergoing a transition from memory held in individual and societal brains to an online consciousness. Obviously, we're not all robot husks just yet, but a lot more of what we 'know' doesn't live in our brains any more and it's a trajectory that I expect to continue. Kind of relates to our first album title (Ways To Forget). Most people go a long way in order to forget things, me included, and I think we're getting what we asked for.

After a long period of writing ideas & songs that didn’t satisfy us, this appeared. I started using a virtual 4 track i.e. I let myself have only four usable tracks on my computer rather than the usual unlimited supply. I also had the rule of only allowing one sound to occur on each track, chopped up a phone recording of some church bells I made whilst on our last European tour, on a day off somewhere in Germany. Added basic drum & a synth line and then sang most of the eventual lyric and melody using scraps I’d written from some automatic writing that morning. We refined the song a lot over the next couple of years, but kept that original nub, which we all responded to immediately and knew a new door had opened, a way out. It was written days after my partner and I discovered we’d had a miscarriage, when I was numb and shocked, struggling to differentiate waking hours from dream. Previously I’ve taken a long time to respond to an event in my life in song, accepting that’s how my creative brain works. But this came out very quickly after, when the event hadn’t finished happening yet.

This was written about how quickly paranoia can turn to conflict, under the guise of misguided self-protection. Being at war in your own house. At the lowest point, turning on each other. In order to fire at/attack/turn on someone, do you need to consider yourself fundamentally different to them? Doubt leads to suspicion leads to fighting leads towards freefalling towards being in opposition. More recently a connection has emerged about how, when that small scale process is unchecked and magnified by access to enormous power, it can escalate into something else entirely, something terrifying. You might end up with a man who says, on his second day in presidential office: “I can understand the other side. We can all understand the other side. There can be wars between countries. There can be wars. You can understand what happened. This is something nobody could even understand...And the generals are wonderful and the fighting is wonderful. But if you give them the right direction? Boy, does the fighting become easier. And boy do we lose so fewer lives, and win so quickly. And that’s what we have to do. We have to start winning again."

Lonely song. Wrote in an empty house when stuck in a loop, can’t escape feeling something is missing. Fairground being set up in the park I can see from my window. Came out all at once.

From an inability to let go to relinquishing control. Letting an outside force take control when I couldn’t. I had a (very rational, sober) friend who once saw an intense light source from Hampstead Heath, which then moved about the sky with great speed in an unnaturally rigid pattern of movement, then flew off at unbelievable speed. I also had a brief religious period in my early teens. Both of these unlikely sources fed the song.

If you have nothing to hide...pigeonholing, the need to fall within acceptable boundaries, socially, nationally. The movement towards the illegality of hiding anything, ownership of your own body, images, online identities, the small print. Pretty Orwellian I guess, initially inspired by the movement of the Right To Be Forgotten, but feels pretty current to me.

The most actively political song on record. Inspired by the famous image of the Turkish dancing dervish in a gas mask; Occupy Wall Street protesters occupying a TV set reproduction of their dismantled tent village a few years ago (‘We Are A Movement, Not A TV Plot’); disobedient objects in general.

Loss of sense of self. We only meet at our intersection. Coming out the other side, having started to overcome the loss I had come to define myself by and not knowing who I was. I reminded myself of a science experiment I once did. You can blow air at an insect in a harness to make it think it’s flying, then fire a strobe to make it appear to be flying in very slow motion. Around then, I was pretty obsessed with life cycles too. The flying stage of the mayfly lasts for twenty-four hours. Hence the line ‘I’m a mayfly caught in a strobe’. Requires a bit of unpicking, I realise.

Regained power, pretty simple and strident. What will you stop at to regain a feeling you need to experience again?

Venn took a really long time to write, much longer than we hoped or expected. This song existed throughout the whole period, morphing through about ten variations. Other ideas came and went but I couldn’t let go of the heart of this one. Partly inspired by passing of a couple of people. My friend’s dad was the A of the ABC in the 70s and I was inspired to learn more of his life story when he died. So I guess the song is kind of a death lament. What and who makes a mark? Does it matter if we do? Acts like a bookend to other songs which mark the loss of one who never had the chance to make a ripple in anyone’s lives but ours. I’m a drop in the ocean, I’m an ear on the plain, Are we the ones we’ve been waiting for?

Venn by Clock Opera is out on Friday 10 February via League Of Imaginary Nations/!K7. For more information on the band, including upcoming tour dates, please visit their official website.