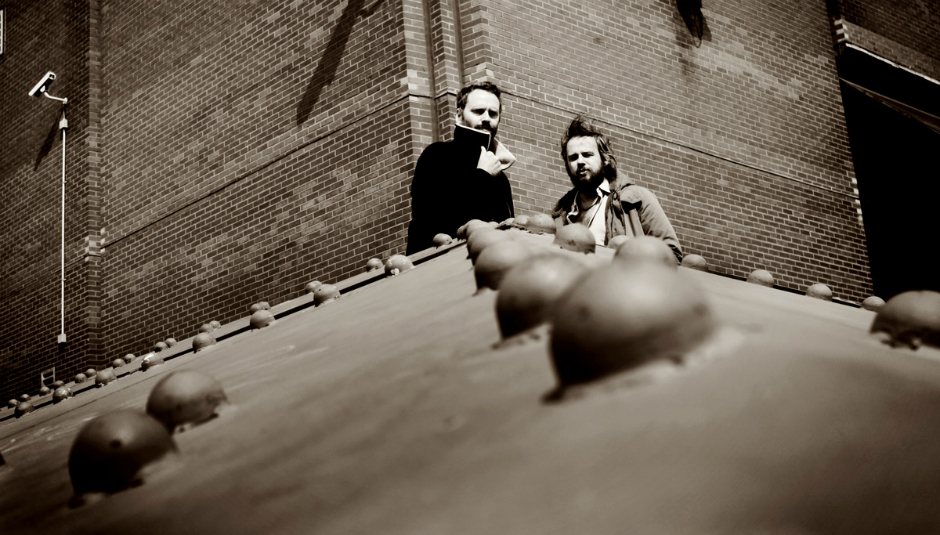 Soaring Majestically: DiS Meets A Winged Victory For The Sullen

Soaring Majestically: DiS Meets A Winged Victory For The Sullen

It was a chance meeting in Italy, 2007 following a Sparklehorse gig that brought Dustin O’Halloran and Adam Witlzie together. Nearly ten years after that first meeting the duo they formed afterwards, A Winged Victory For The Sullen, are set to release their third record, a score for Jalil Lespert’s sexual thriller Iris. It’s a wonder that the pair can muster the time for this collaborative project given their prolific output outside of the band. O’Halloran has been producing film scores at a rate of knots including Lion, and the TV show Transparent, and current Stars Of The Lid member Wiltzie has been busy touring with Jóhann Jóhannsson and releasing his own score for Salero.

But then AWVFTS has always felt like a slightly ephemeral concern that might just disappear into the ether at any given moment. Much like they appeared in 2014 with the beautifully transcendent Atomos, and then quietly disappeared again; somehow, you always get the sense that this is a band you should relish while they're around, because that may not be forever.

The longevity of this collaboration is certainly not an idea that Wiltzie spends too much time pondering. “I don’t really think about it. It’s hard for me to think six months ahead in my life; I get nervous. I’m thankful that we met, and in such a short time we’ve created this beautiful thing together – for me that’s fine. Thinking about whether it’s gonna last forever, I don’t know, I’m not gonna last forever, so who knows? I just feel lucky, and it’s a clichéd thing I’m about to say, but I try to enjoy every moment (laughs).”

For now, at least there is another fine collection to enjoy. As for how they got involved in the project, O'Halloran explains: “He (Iris director Jalil Lespert) just came across our last CD Atomos and listened to it and he told us in his very French accent: ‘This is the sound of ma film!’ It was pretty much that, as simple as that (laughs). Then, of course, there was the long process of working on it, but that was the initial contact. He just kind of stumbled across the music.”

It’s unsurprising that Lespert was instantly taken with the visceral and inherently cinematic nature of AWVFTS's music, but how different was it to work on a score as opposed to making music for yourself?

Adam Wiltzie: “I would say every film is completely different. You have a basic story line that you follow and compose music to. Different directors decide early on or late on when they’re gonna get the composers involved, and I think historically speaking it seems, and I can say this for both of us, they wait to the last minute to get you involved. But this time we started right when they finished filming. We were there for the editing process, which was nice. We basically started from the very beginning with them. Our original demos and sketches that we sent to them before they finished the film were their basis for everything in the film, so it was nice. It was special because it’s not something you get to do every time.”

Dustin O’Halloran: “They were sending all the daily rushes each day when they filmed so we got to see everything in its raw form and feel the atmosphere. But at the same time, we were working with small ideas and sound, experimentations to see what fitted. It was nice to have that kind of time, and not feel rushed to finalise things. Everyone was finding their way through it – that’s a nice process.”

AW: “Also the process was nice because a lot of times in film music – maybe it’s a dirty secret that people outside the film world don’t know – with a lot of films you work on you're just trying to recreate the temp music that they use (chuckles). You’re basically trying to rip off the spirit of somebody you don’t even know. It was nice that it was all us. I have to respect Jalil a lot for that. He completely believed in us and let us bring that personality to the film – it was a real pleasure.”

One striking difference between Atomos and the Iris score is the tone. Iris is distinctly darker, and unlike the former record, its edges are harsher and it’s atmosphere more claustrophobic in comparison to the airy breadth and reach of Atomos, which accompanied a dance piece by Wayne McGregor.

DO: “This is a bit of the nature of the film. I mean, on Atomos we were really writing music for imagery – it was really us making an album. The dance came after we made the music, but the atmosphere of the film really influenced the music. It’s a sexual thriller with a lot of dark edges, so there’s a lot of tension that needed to be represented in the music.”

AW: “For me the funny thing about the film is it really took me until I saw it in the theatre last week – it just opened in Belgium – it’s really not very French all. The director’s very French, but this is not a classic French movie; if anything, it reminds me more of a Hitchcock noir even though it’s told through the spirit of a crazy Frenchman. It does have this claustrophobic quality to it, I totally agree.”

Film scoring must, in some respects, be a more pressurised process, and O’Halloran concedes “It can be very challenging,” but has their previous experience made it a little easier?

DO: “Every time you learn things that help you move it along. It’s pretty complex, there are a lot of moving parts in a film. When you first start it can be a little overwhelming, but as you go on you start to get better at organising things and how you economise how you work. Every director on every film is so different, so it’s hard to compare how it is to work on a film because every time you’re dealing with so many different personalities, and ultimately it’s just a really big collaboration with you, the director, the editor, and everybody trying to shape the final outcome of this film.”

And of course, although this wasn’t their first film score independently, it was their first together. So, how did that pan out?

AW: “It’s more fun. It’s good times all the time (Dustin laughs). It really is. It’s so much for fun for me. We like what each other is doing. Man, it helps the workload to have a comrade there. You know, when you’re having a bad day, and you’re like: ‘I can’t nail this cue, can you help me?’ He’s like ‘Yeah man no problem.’ I’m telling you it’s a lot easier to have someone you trust. Because no matter what, even big film score people, you’re always gonna have some kind of support group behind you. No one can do it all by themselves. It’s an organisational nightmare in general.”

DO: “Also, I think for us every record that we’ve made is a bit of an experiment, and it’s always nice to have this new element of experimentation thrown into what we do because this is the first time we’ve ever done a film together. So, it’s always an experiment to see what we can do, how we can do it, how we can pull it into our world and make it sound like us when there are these third party collaborators. At the end, I think we found a place where it was pushing us in different directions because it’s a film, but I think it still feels like our world.”

Given the wealth of instrumental music that AWVFTS and contemporaries like Erased Tapes' labelmate Nils Frahm are making, they seem to retain a certain essence of the band in everything they do. Even when Wiltzie took to the stage with Jóhannsson at the Barbican just before Christmas.

AW: “Johann and I, all three of us, we go way back so we have a lot in common musically, so it’s fun to tour. I had a good time, and it was a fun experiment. Years ago, I used to do sound for him, and he’s been begging me to come play with him on stage for a while because he kind of quit playing live, because he’s been so busy with film scores. I just did these ten days with him, and I brought along the string players that play with us, I got them on board, and Stuart [Bailes], the guy that did the lights that you liked so much, I brought him. Terence Goodchild, the guy who does the sound. So basically, it was Jóhann Jóhannsson for the Sullen last night.”

It’s unsurprising that the band’s presence was felt that night in more ways than one, and it’s also great to bear witness to the increasing amount of collaboration that is taking place within instrumental music.

DO: “I think we’ve all been doing our own music for a long time, and the fact that we’ve all started to get more in touch there’s more communication. Around the time Adam and I started making a record was around the same time that Jóhann and I became friends. I think everyone has their own voice, but we’re all exploring instrumental music, so it’s a good time. We're inspiring each other, and there’ll be a point when the press doesn’t care, and nobody cares anymore, but we’ll still keep making music. Right now it’s nice that we can play venues like the Barbican and people actually show up – we appreciate that.”

As AWVFTS are set to release yet another wonderful collection it seems a little premature to consider people not caring, but you’ve got to wonder with all the extracurricular activity this duo engage in how sustainable the project is.

DO - “With my solo stuff, it’s been put on the back burner a lot because any spare moment seems to be filled up with A Winged Victory, writing or touring. Yep, lots of coffee, not much sleep, but I love the project, and the response has been so positive. So we’re inspired to keep going. You’ve just gotta put your time where the energy is, and make time for the things as you can. As Adam said 24 hours isn’t enough. It’s 24-7 making music over here.”

And the binding character of their partnership is clearly something they both hold dear.

AW: “It’s different. I think the simple answer is collaboration is something you could never do by yourself because you have another person involved. It’s not that it’s any more rewarding, it’s just different. OK, so we’ve been busy with this, but Dustin’s been busy with the Transparent soundtrack, it’s not like he’s not working on music by himself or vice-versa; you just try to fit things in where you can. I think they’re all connected and they’re all rewarding in their own sense. I don’t think you could have one without the other. Everything that happens in your life affects the next thing, and whether I’m playing with Jóhann or Dustin or by myself or just going to an art museum, I think they’re all connected. They’re all very important for me.”

Iris is out now via Erased Tapes. For more information about the band, and upcoming tour dates, please visit their official website.