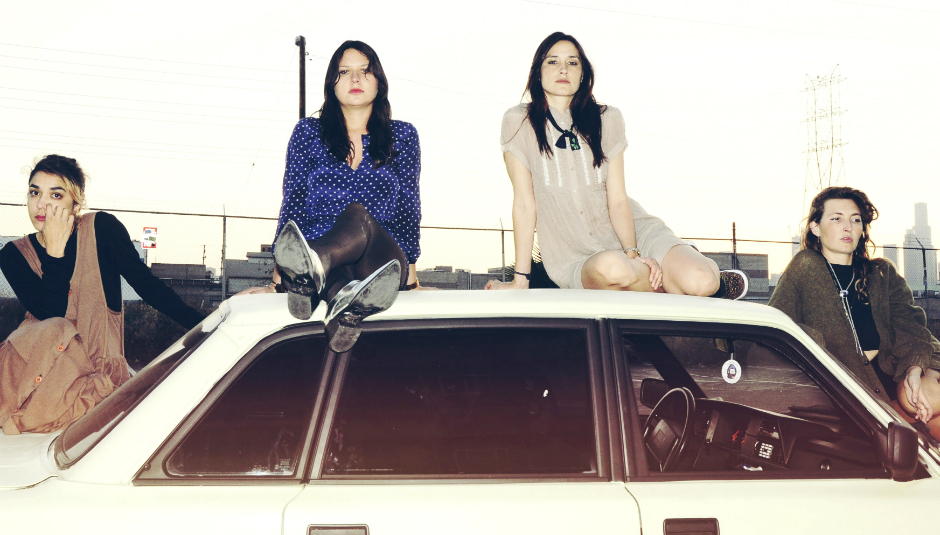 There wasn’t supposed to be another Warpaint record this quickly. In March of last year, the Los Angeles four-piece wrapped up eighteen months’ worth of touring behind their self-titled second album with some of the biggest headline shows they’d ever played, including one at a sold-out Hammersmith Apollo. At the same time, they made it quite clear that they were bored of the hamster wheel that is the traditional release cycle, and seemed to think that they’d found a way off of it. They put out a couple of new tracks, ‘No Way Out’ and ‘I’ll Start Believing’, with the promise that more would follow later in the year. It’d be better for everybody, they reasoned, if they were to write, record, and then release new songs as and when they were ready - instant gratification all round.

Plus, they were more than ready for a break, both from the rigours of the road and from Warpaint being their primary creative focus. Everybody had other things they’d rather be doing for a while, other itches to scratch, and a commitment to regular single releases, rather than the gargantuan task of a full LP, should have meant that those other projects would be able to coexist with the band. Stella Mozgawa, the drummer, spent time in both the studio and on the road with Kurt Vile, and sat behind the kit for sessions with Cate Le Bon and Tim Presley, too. Theresa Wayman enlisted Sarah Jones of Hot Chip and Guro Gikling of All We Are to form BOSS - one single, the electro stomper ‘I’m Down with That’, emerged last October - and spent time on a record of her own, too, one that’s been in the works for some time now. Emily Kokal, meanwhile, took a step back from music altogether.

Jenny Lee Lindberg pressed ahead with a solo record as well, although unlike Wayman, she actually got around to finishing and releasing it; she did so in pretty traditional fashion, putting the sparse Right On! out through Rough Trade and touring behind it for most of last winter. It was in an interview with DiS last December that she mentioned that the single-by-single model had been scrapped. Album number three was back on the cards, and soon. “We’re working on the album,” she said, “and it is going to be an album.”

She wasn’t kidding. Nine months later, the arrival of Warpaint’s third full-length, Heads Up, might have buried the group’s hopes of swerving the usual model of creative output for the time being, but it certainly doesn’t mean that they’ve done things by the book. Warpaint was recorded between London and Los Angeles, and saw the richly experienced Flood man the boards. It also sacrificed some of its predecessor’s intimacy for big, swirling synths and thumping programmed beats - the focus was still on atmosphere, but the received wisdom seemed to be that it should be of the monolithic kind, overwhelming the listener rather than ensnaring them.

Heads Up feels like an about-face. The big-name producer is out, and Jacob Bercovici, who oversaw the band’s first EP, is drafted back in. Most of the songs were demoed at the members’ individual houses, with the studio mainly used to tweak and embellish. There are out-and-out dance songs here, and beats and samples that feel like nods to hip hop. The sense that a weight’s been lifted is palpable. It all feels a bit more informal again, a bit scruffier.

“The way I see it, making any album is a complicated process,” says Wayman across a transatlantic phone line. “Why make it worse by adding more and more unknowns to the situation? You’ve already got the constraints of time and money to work against, so if you go out of your way to bring in a new producer, you’ve got to get to know them, and each of you has to form a relationship with them, and there’s no way of knowing if they’ll be positive ones. If you book a big studio, it might not suit the way you sound, and you won’t know that until you get there, and that comes back to time and money - you’ve just wasted some of both. That’s frustrating to me, and things can get really stressful really quickly. We wanted to lessen the pressure as much as we could. We always work off of our demos anyway - all we ever do is chase them - so why not do as much as possible at home, without other people?”

That stripped-back approach was applied across the board, which goes some way to explaining why Heads Up has materialised within eighteen months of the band telling us not to expect another album any time soon, if ever. They moved quickly, implementing a ‘too-many-cooks’ policy and refusing to overthink things - something that had been at the heart of the policy of just releasing singles for the foreseeable future. “The cores of the songs were never in question,” explains Wayman, “because it was just Stella and I coming up with a skeleton and basic arrangement from start to finish, and then Jen and Emily adding their own parts and adjusting things here and there. In the past, we’d all be together in the room, making something from scratch, and everybody would be chiming in on every little thing. That way of working is really time-consuming, but we started out writing last summer, when we still thought that we were going to be releasing one-offs, so we had that idea in our heads to just arrange the song and move on. That never really changed, even when we knew that we were working towards an album instead.”

That minimal approach applied to personnel, too, resulting in what Wayman describes as a family affair. “My brother did some engineering, particularly with the drum sounds, and then we asked Jacob to come back and produce because he’s one of us; we’ve actually called him the fifth member of the band in the past. He was really instrumental in getting us out of the garage and into the studio for the first time, and he helped shape the sound on Exquisite Corpse as much as any of us.”

When the band chose to preface Heads Up with ‘New Song’ as the lead single, the general consensus seemed to be that the change in direction was going to be a steep one; this, after all, was Warpaint on out-and-out dance-pop form, a marked move away from the hazy atmospherics that had become their calling card. In actuality, though, the clues have been there all along. “We’ve been going in that direction for a while,” says Wayman. “That seems obvious from where we’re standing. If you go back to the last album, there are samples, there are beats, and there are bass-driven songs. ‘Hi’ is a good example; it has that kind of beat - totally electronic, with a simple bassline. We’ve been playing around with that sort of stuff for a while. It’s like people forgot about ‘Disco//Very’ - that felt pretty dance-y too, especially live.”

In theory, that side of things should be less veiled on Heads Up. The individualised way of working, as well as the decision to do as much home recording as possible, has thrown up a group of songs far more reflective of the group’s tastes, both collectively and on their own. “There’s a lot of elements to our songs that people don’t seem to realise are in there - our influences, little stylistic things. I don’t think people know how much Stella likes to make electronic dance music, or that I like to play around with drum machines and samples more than live instruments. Because we worked on demos on our own, the album feels like less of a continuation than the last one, because that had a lot of missing pieces for the listener, who might not know us as individuals. There are places where it might feel like a jump, but it’s really not.” For the most part, across the record, those advancements are subtle; ‘Dre’, in keeping with its title, features a clattering hip hop beat that’s in line with the type Wayman mentioned she prefers. ‘By Your Side’ adheres to a minimalist aesthetic, with a stop-start rhythm and meandering vocal take. On ‘So Good’, the rest of the group grant themselves more license with Lindberg’s bassline than they might normally - chattering synths, melodic guitars, more looped percussion. The immediacy of ‘New Song’, in the context of the tracks surrounding it, has it looking like the outlier.

“We almost didn’t put it on the album,” Wayman admits. “That probably says something about how much we don’t look for ‘hits’. We had a couple of issues with that song and, rather than try to work through them, we just left it on the shelf for a long time. We were struggling, so we just put it aside. Anybody who’s radio-minded wouldn’t have done that - they would’ve prioritised it, because it was the one song that had commercial potential, or whatever. That’s not how we work, and we were happy to give it space to come together in its own time. I’m always happy to expand our audience, but it was never supposed to be the ‘hit’, you know? That seems to be how some people have interpreted it.”

Wayman is forthright about the fact that the band were on the verge of burnout by the time touring for Warpaint came to an end - “We didn’t want to be on the road for two years, so we tried to cram everything into one” - and as fast as the turnaround between that record and Heads Up has been, it’s clear that those few months working away from the band have proved crucial in keeping it together. “The schedule we’d had was so intense, and so rigorous, that we really needed that space from each other for a while. We needed to remind ourselves why we started this band.”

“When we started working together again at the end of last year, we were just feeling, like: ‘Let’s just make this happen. We’ve got one record left on this contract with Rough Trade - let’s just do it and see where it goes.’ We were having to try to rationalise going back into the studio again. Now, we’ve come out on the other side of that with something we’re really proud of, and that we can’t wait to get out and play. We know now that we still love doing this, and that there’s still a lot more for us to create together. There was a point where it seemed like the opposite might be the case, and we’re grateful that it wasn’t.”