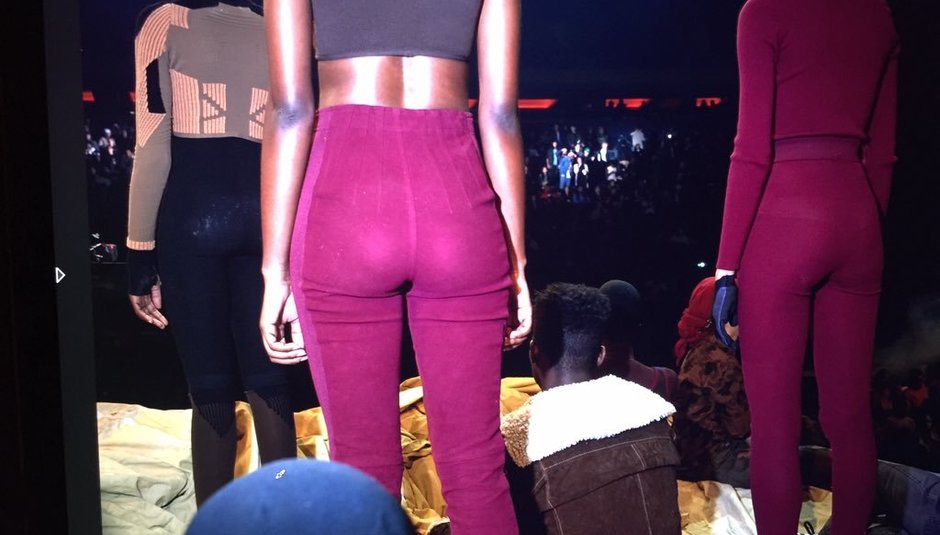 You might have heard that Kanye West launched his new album, The Life of Pablo (formerly Waves, formerly SWISH, formerly So Help Me God) along with his new fashion line, Yeezy Season 3, at Madison Square Gardens in New York on Thursday. You might even have watched him do it live. Twenty million apparently attempted to log onto the live stream via Tidal, while it was also beamed to cinemas across the globe, or at least to cinemas in North America, Europe and Australasia.

This was either the biggest album playback party of all time, or the most watched fashion show of all time. Either of these is an impressive feat. There is an argument, in numerical terms at least, that we were watching the greatest fashion designer and the greatest DJ of all time all at once. I’m not sure who would make that argument (okay I’m lying – I have a pretty good idea about one guy who would make that argument).

Was this a vainglorious stoking of the superego? Possibly. Was it strangely entertaining? Definitely. Not so much for the first 30 minutes as streamed to Hackney Picturehouse, which consisted of ambient noise and wide shots of Madison Square Gardens filling up, shots of a big billowing sheet over the pitch and occasional images of feet, (often carefully in bedecked in Yeezys). Then the Kardasians arrived, all in white and furs, signalling something was about happen. Kanye, wearing a casual red top bearing the legend ‘I Feel Like Pablo’ and said to be available at the merch stand, hugged and high-fived his way to a laptop where he plugged in and, after some technical issues, simply played out the album.

The fashion show art directed by Vanessa Beecroft, once revealed beneath that sheet saw predominantly black and minority models standing stock still on a couple of towers, surrounded by many more at ground level. They wore a lot of desert colours and wools, limited their movements to sitting down when tired or bored, and looked cross. Naomi Campbell turned up at one point in black fur and smiled a lot. At one point many of them raised fists in a sign associated with the Black Panthers. This is not insignificant, in fashion or American cultural life right now (or, let’s be honest, at any point in the nation’s history) but largely the focus was on the music, and on the man playing it from his laptop. The cuts to Kanye and his crew dancing were all moments of fun.

The post-2am vibe of the album our man has tweeted about is definitely a thing and there are some certainly some great bit of music here. First listen also revealed plenty of Kanye’s trademark ‘wtf-he-just-say’ lines. There’s the one about anal bleaching and getting bleach on his t-shirt, the one about how he thinks he still might sleep with Taylor Swift, the rap on 'Feed Back' about how it would be so like Kanye to make a rap about Kanye’s love of Kanye that ends with the line “We still love Kanye and I love you like Kanye loves Kanye”. This sure as shit is not an album review, but it is a recommendation.

After the playback was when things got really insane. Kanye took the mic, and went all Kanye. He thanked and cajoled a bunch of people. He played songs on request. He had his crew chuck their phones into his hand so he could play their songs. There was a glorious moment after his homily to the value of pursuing all your dreams, when Kanye stated his dream of being be creative director of Hermès, then turned a said 'maybe that’s a stupid idea'.

The pinnacle of the night was when he revealed his new computer game about his dead mom going up to heaven. Like the song that failed to make the album’s final cut, it’s called Only One. In part of the graphic intro he played his mom rides a flying horse up. That’s his actual dead mom. He played it twice and got a round of applause in the cinema I was in. And the biggest laugh.

After Kanye left it was up to his crew to play out songs – much from 808s & Heartbreak – as the crowds filed out and the models started to party. It looked like a party you’d want to be at.

No one in the world other than Kanye would think to have staged this event. It was the greatest album-playback-party-fashion-show-computer-game-launch of all time. No one can take that away from him.

Magnetic Fields and the Indian Artist...