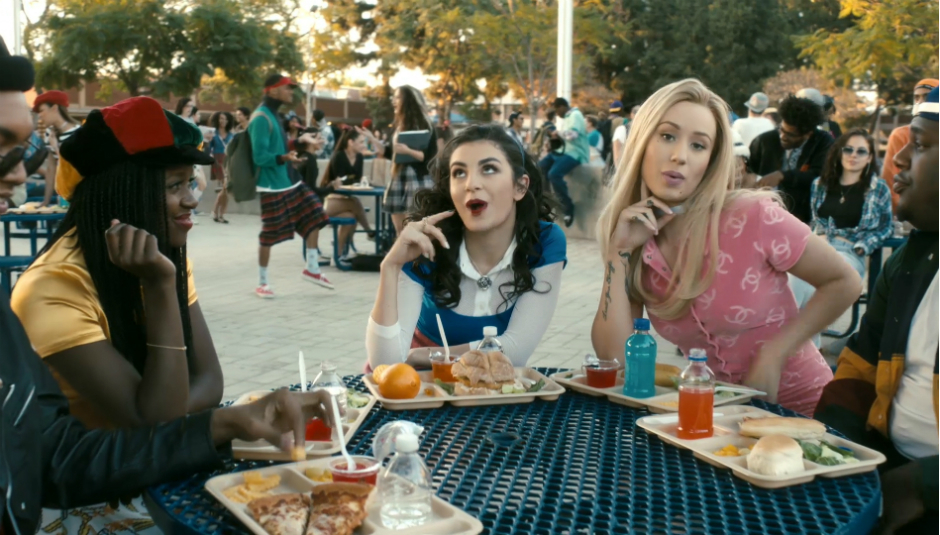 Why is 'chandelier' 2014's biggest buzzword? What is the year's best saxophone solo? Who on earth would go to a McBusted concert?

If you've not been paying attention to pop music over these last six months then these existential queries will have passed you by. Fear not, two of DiS' Top 40 fanatics are here to fill in the blanks. Read on for their lowdown on some massive chart smashes, immaculately catchy albums and the occasional knob joke. You're welcome....

Rob: First things first, Kate, 'Fancy' is quite clearly the pop song of 2014 and I defy you to claim otherwise. I've listened to it enough times to know Iggy's rap off by heart and no longer be ashamed of it. That shit's going straight on my CV, right next to my Welsh GCSE in Japanese and the volunteer work I've definitely done but hope no one asks about in any great detail.

Kate: What I like about 'Fancy' is that there's so little to it. It's a totally achievable pop song.

Rob: Totally achievable pop, I love it. Sounds like an Olly Murs album.

Kate: Yeah. You too can create this pop smash: all you need is a Casio keyboard, some back of the bus swagger and the ability to spell your own name. And Charli XCX, but she’ll collaborate with anyone so you could probably get her.

I'm not sold on Iggy Azalea though, she seems like she's been made up by a kids' TV show - I sort of half expect her to show up and do a guest verse during the Orange Organics' set at the school dance (that's a Pugwall reference, kids. Google it). Killer video though.

Kate: I can't decide what's worse: the confession or the hashtag. Anyway let's gloss over that and concentrate on 2014's biggest pop comeback: the chandelier.

Iggy and Charli are busy not giving a fuck about swinging light fittings and I can't get Sia out of my head. What a gloriously desperate song 'Chandelier' is. I never want to hear anyone attempt to karaoke it though, can you imagine?

Rob: I have only done karaoke once... to Girls Aloud's 'Love Machine'. It went impeccably well.

Other songs from this year I would consider drunkenly shouting to include Rita Ora's new one and MJ's disco holler from beyond the grave. Nothing by Sam Smith though, I'd give myself a hernia trying to reach those high notes. Anyway, we should probably talk about some pop albums.

Kate: What, no time to destroy all credibility by declaring my love for J-Lo's 'I Luh Ya Papi'?

Kate: I feel no shame. I had a brief but intense fling with MNEK's 'Every Little Word' too - file that one under Songs To Quite Quickly Skip When They Come On Shuffle And Your Mum Is There.

Rob: And on that enlightening note...

Kate: Wait. Where do the boundaries of pop end? Would you class St Vincent as pop, for example?

Rob: Anyone who's too cool to be on Capital FM is out of bounds. So no Annie, Grimes, FKA Twiggs and the like. We're talking about former and future Top 40 hitmakers here.

Anyway, I guess the big pop record of the year so far has belonged to Pharrell Williams: a man who respects women so much that he wrote a whole album about them. Beat that Germaine Greer!

Rob: Yeah, cheers Pharrell. It's been a much better year for singles than albums, hasn't it? I haven't really fallen in love with any pop records so far. I guess that's the price we pay for living in a post-BEYONCÉ world.

Kate: Ronika's Selectadisc is pretty good though - it's got this driving beat all the way through it that makes me feel like I've just done a gruelling workout despite the fact that I haven't exercised since 2002.

Kate: She's got a cool vintage Kylie sound going on too, which is lucky since Kylie's album was kind of a let down.

Rob: I’m truly saddened by Kylie’s slow decline into Top 40 obscurity. What I really wish is that she’d swapped albums with Lily Allen so that Sheezus was full of demure disco grooves and Kiss Me Once just chatted about periods and online haterz.

Plus, you’d of got to hear Miss Minogue utter the phrase “I don't like girls much, they kinda silly. Unless of course they wanna play with my willy.”

Rob: I want to take a trip to that space time continuum. Even there, can we both agree that the Röyksopp & Robyn EP would still be a solid 8/10?

Admittedly, I can’t think of another pop sax solo from 2014, but that trio deserve some sort of medal for ‘Monument’.

Rob: One of the rare pageviews I’ve been happy to donate to MailOnline.

Kate: There are more important things to discuss, of course, but any interviewer that doesn't at least try to get Pharrell to reveal the secret of eternal youth has really missed a trick.

Rob: This is why we can't have nice things, Kate.

Rob: Cue a gazillion ‘99 Problems’ jokes, and I laughed at all of them.

Kate: This would never have happened if he hadn't dropped the hyphen.

Kate: That's how it is when you're Yeezy's fave. Can we all just take a moment to try to picture Kanye West settling down to listen to Lana Del Rey and feel some feelings? It's impossible. Just impossible.

5) Robin Thicke continuing to be a complete tool…

Rob: ...by cheating on his wife and then naming his new album after her

Kate: What a dick.

Rob: Thankfully, it sold nothing.

Other pop stuff we forgot to mention

Rob: So before we go, Kate, how disappointed were you to miss out on Beyoncé at the O2 this year? Could you describe your emotions on a scale of one to 10, one being ‘not bothered at all’ and 10 being ‘besides yourself with woe’.

Kate: I would say I was hovering somewhere around TWENTY FOUR, especially because I was waiting and hoping and wishing and praying that she would bust out ‘Bow Down’ when I saw her last year but she kept it to snippets and between-set video filler.

Having just looked at the setlist, she replaced a load of the go-to-the-bar-while-this-album-track-ballad-is-on bits with BEYONCÉ bangers. Ugh. I’m reliving the pain all over again.

Rob: I was this tempted to get tickets to the Beyoncé- Jay Z joint tour, but the only European date is in Paris and I have no money for such frivolities. At least some of us got to see McBusted instead?

Kate: As the old saying goes, if you can’t get to Beyoncé, get to McBusted. It’s all a bit of a blur of ridiculously brilliant Back to the Future intro, excitable man-boys scampering around the stage after each other like hamsters in a wheel, pop-UFOs, jokes about farts and sex, and triple boob inflatables.

Rob: Well, you certainly don’t get that at a Sky Ferreira gig.

Kate: I CAN’T BELIEVE WE FORGOT TO TALK ABOUT ‘BOOM CLAP’! Curse you with all your distracting ‘Fancy’ talk.

Rob: Maybe if we just end with the YouTube video that will be adequate recompense?

Kate Solomon can be found on Twitter chatting about her (imaginary) Simpsons-themed pop punk band: Grimey.

Rob Leedham is also on Twitter - mainly to plug the DiS Does Singles column.

In Photos: The Libertines @ Hyde Park...

Rian Murphy from Drag City on the Ind...