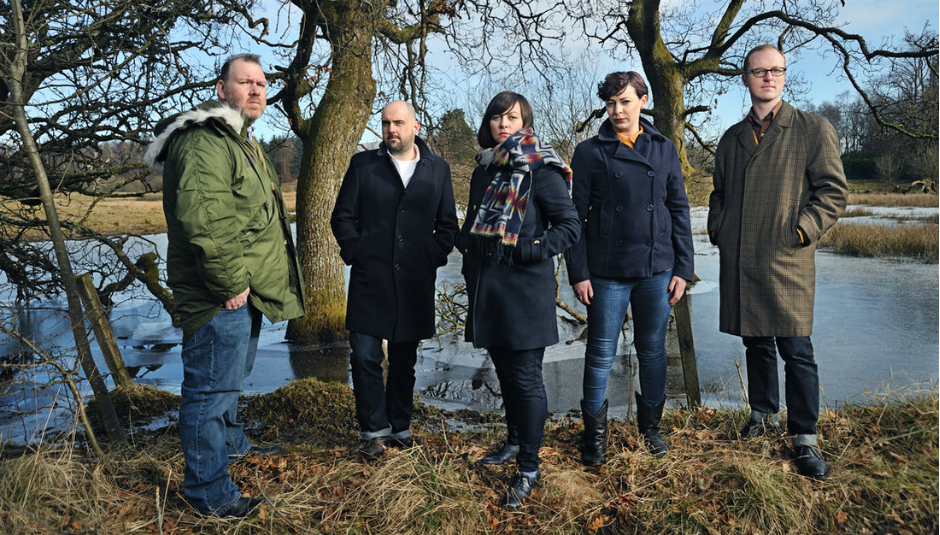 You know Camera Obscura, right? The Glaswegian gang of five who specialise in big, orchestral pop songs. The kind that make you go giddy with their lovestruck splendour.

Well, as of last year's Desire Lines, they've left all that behind. The twee niceties of 'French Navy' and 'Lloyd, I'm Ready To Be Heartbroken' have been replaced with a slowburn melancholy that's less immediate, but just as potent. Songs like 'Fifth In Line To The Throne' are couched in the kind of aching sentiment that grabs you by the heartstrings and swoons you into submission. You'll really feel Tracyanne Campbell and co's new LP, and that's why it was one of our Best Albums of 2013.

Away from the recording studio, there are brighter times afoot in the Camera Obscura clan. Organist Carey Lander seems firmly on the mend after her year and a half battle with cancer, which came on after the band finished touring 2009’s My Maudlin Career. On a similarly life-affirming note, Tracyanne recently celebrated the birth of her first child: Gene.

To talk through the band’s past year, and their new 4AD Session EP for Record Store Day 2014 - we chatted with Tracyanne at teatime on a sunny Scottish afternoon.

Yeah he’s good. He’s currently bouncing up and down on a swing that’s attached to the door frame.

Desire Lines has been out for just under a year now. What do you think of the album now you’ve had time to reflect on it?

It’s a strange one. I probably think about it the way that I think about any record, you know. I tend to make them and then they’re over and done with for me. Obviously, we have to play the songs and that’s something else. It’s nice to play new songs instead of old songs - more of a challenge or something.

What do I think of the record? It’s not like I sit and listen to it. I was listening to some of the songs the other day, and I thought it sounded good. I was still a bit amazed that Neko Case sings on the record.

Does your opinion change on the songs change as you play them live. Are you more fond of some than others?

I think it’s weird for the band to talk about being fond of the songs. I really don’t like playing songs from the early records, I know that much. It seems like such a long time ago and I can’t really relate to a lot of the stuff, you know? I guess I’m fond of the songs, but they’re my songs so I have a different relationship with them than most people. I’m more critical than most people.

Your 4AD Session EP is out for this year’s Record Store Day. How did you choose the songs that went on the EP?

I think we did most of the songs we were thinking about playing live. I was quite pregnant when we did that EP, so it was really hard work. I was very tired. We did it in one day, so it was a very long day.

You recorded the EP at the Tron Theatre in Glasgow. How did that affect the way the songs came out?

Well our sound engineer, Kenny McLeod, the guy we usually use live actually did the sound. He’s a local engineer and mainly works with us and bands like Mogwai and The Pastels. Yeah, its a nice room... It’s in an old part of town, it’s an old theatre. We didn’t play to an audience, just to a couple of pals.

‘Every Weekday’ sounds particularly different to its album version?

It’s probably a slightly different arrangement. I think that we were interested in not trying to directly copy the record. That’s always a mistake, you know? As much as we record live, you can still polish it up. But you can’t polish something that’s totally live.

Do you often change the way you perform songs live?

I think we probably do unintentionally, because we don’t listen to our own records.

We’re not the kind of band someone goes and sees and it’s exactly like the record. I find it quite boring when it’s like that.

Do you get involved in Record Store Day yourself?

We all buy records in the old fashioned way, some of the band are more into the digital thing than others but I think something that’s important to support, because we do buy records. It’s really great that we’ve managed to put a record out because we haven’t always done that. I’m glad we’ve made the effort.

What was the last LP you listened to?

The new Frànçois & the Atlas Mountains record. I’ve been friends with Frànçois for about 10 years, and he used to play with Camera Obscura from time to time. He’s done a few tours with us doing various bits and bobs. So I’m a fan in more ways than one.

And what was the first record you ever bought?

That was ‘Why Do Fools Fall In Love’ by Diana Ross. That was back in the early 80s when Diana Ross was still credible. I’ve still got it. I’ve got a jukebox. It’s not in the jukebox because you can only have so many songs in it, but I’ve still got it.

Your songs are mostly inspired by relationships. How has that changed since you started the band?

When we were starting out as a band I was starting out as a songwriter. I was just learning, so back in the day we’d listen to other groups and dissect, ‘Oh. They’ve got two choruses and three verses.’ I'd have a vague idea of what to write about. Some of the songs just came the same way that they come to me now, but I think it was a bit more laborious back then. More like trying to do it as a formulaic thing.

So you think less about songwriting now?

Yeah. It’s more instinctive. I tend to write in the moment, I suppose. I’m not the kind of songwriter who sits down and thinks of a topic and churns out a song. I think that’s a skill… I’m more of an emotional songwriter, which sometimes annoys me because then you’ve got to rely on your emotions and that can be quite exhausting. You’ve got to wait for something to happen. You’ve got to really feel something. I wish I could be a bit more prolific, but that’s the way it goes.

You’ve said people interpret your songs as though in you’re in a perpetual state of distress. That would make sense, if you’re only writing when big emotions hit you?

I guess it does. I’m not really into telling people this song’s a sad or this song’s a happy song. It’s about what you want it to be. I know what the lyrics mean to me in places and what the songs are about. Music is a personal thing and people take what they need and what they want from it.

So without spoiling the entire song, could you tell us the inspiration behind ‘William’s Heart’? It’s our favourite track on the album.

I guess it was about people’s relationships with their alcoholic fathers. I know quite a lot of people who are…. yeah. The one thing we didn’t want to do was make another My Maudlin Career or Let’s Get Out Of This Country. Those were quite similar, they were produced by the same person (Jari Haapalainen) and have a certain feel to them. I was trying to avoid the big choruses, which sounds like a stupid thing to say. I didn’t feel like singing happy choruses. We didn’t feel like playing happy choruses.

We had quite a tough couple of years. A lot of things in people’s private lives were going on that were sad, and difficult to deal with. We purposely didn’t write pop songs.

But a few still crept out like ‘Do It Again’ and ‘Break It To You Gently’.

I guess we struggled a bit we that, because we were trying not to do that. Tucker Martine who we did the record with, he was more about getting us to go with the flow and if you write a pop song, then don’t deny it.

The last two albums you mentioned kick on a big track like ‘French Navy’ and ‘Lloyd...’. The new one opens on an intro?

Yeah. I think we achieved what we wanted to achieve with that record. There aren’t many tunes in it. Maybe it’s a bit more of a slowburner.

It does grow on you.

That’s good, ‘cos I don’t think a lot of people want to give the time to let an album grow on them. If that’s what it is then people who think that have given it a chance.

Is that Stuart Murdoch in the video for ‘Troublemaker’?

Yeah, it is. It’s Stuart, his wife and their baby. They were just in the park while we were filming. It was a coincidence. He didn’t need to be in it, but we thought it was a nice bit of eye candy. One for the geeks…

The Guardian recently asked a lot of Scottish musicians for their opinion on the forthcoming independence referendum. It seemed like the prevailing opinion was for separation from the UK. What’s your take on it?

I’m sort of on the fence. I was very much strongly against independence and now I am on the fence. It’s hard to articulate it. It’s quite a tricky thing. I really don’t know, and I’m feeling under pressure about it to feel strongly about it like some people do. I’m not happy having the Tories rule over us, because I think they’re appalling people with appalling policies. Absolutely horrific.

For me the only reason to do it, would be for us chance to vote for who we want. I’m very proud of being Scottish, but I don’t really feel threatened by being part of the UK. My partner is English and my Granny is Welsh. I don’t know. It’s a bit of a strange one.

Desire Lines is out now in all good record stores