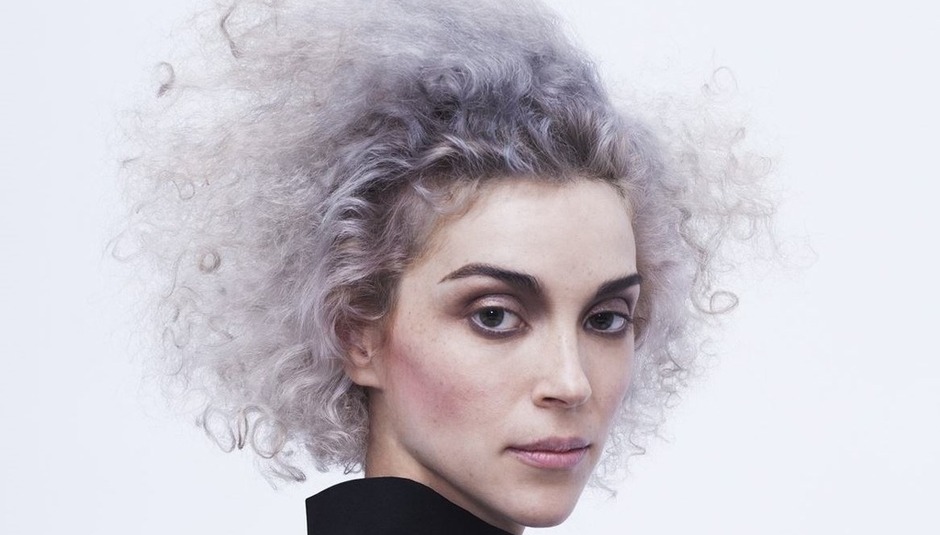 Annie Clark has a problem. Speaking from a “fucking freezing” New York, she’s waiting for a bandmate and on the hunt for coffee. Trouble is, she’s stuck at a friend’s house, and the search is not going well. “I think I’ve found some instant coffee, but maybe it’s going to be disgusting,” she tells me. Best left well alone then? “But it has caffeine in it and there’s a fucking polar vortex, so I think I’m gonna cut my losses and drink it.”

Aside from the distraction of an unfamiliar kettle – “How do I know when the water is boiling?” – and a temperamental stove, she’s in good spirits. Her new, self-titled album is out at the end of February, and if the reaction to the tracks ‘Birth in Reverse’ and ‘Digital Witness’ is anything to go by, it’ll be immensely popular (and rightly so). Blending a myriad of influences, it’s her most ambitious collection of songs yet; bustling jazz rhythms sit next to Bowie-esque pop and smooth soul, expertly blended together in a confident, loose manner.

She’s even coined a strapline – “a party record that could be played at a funeral” – that’s sure to be repeated in the opening paragraph of every review, and gives a pretty good indication of how St. Vincent tugs at your heart while moving your feet. While reluctant to reveal too much of the story behind some of the songs and the lyrics, we chatted about her love for Pantera, leaving 4AD, and why horns have such a unique voice.

DiS: Are you concerned about getting back in the game so soon after Strange Mercy and Love This Giant? Won’t burn out be an issue?

Annie Clark: You know, the thing that is harder is stopping; keeping going is cool. It’s kinda like people get sick when they go on vacation, so it’s better for me to keep going. I don’t think I’ll get burned out, I’ll be OK – but ask me again in nine months!

I saw you quoted as saying that you wanted to “make hay while the sun shines”. Do you feel your past success has given you a platform to be more bold, experimental, and push in different directions?

I think a lot of people make safer records as they go on, and success has the opposite effect. They’ll be like: “Oh, more people might be listening so I’ll go towards the middle of the road.” But I know in my gut that the only thing I care about – aside from my friends and family – is music, and so the only way I can proceed in life is to make music that I believe in, otherwise it’s just not worth it. Otherwise, I don’t know what the point of anything is at all…and I can’t even use the stove, so clearly I have no ability to…you know.

So it’s music or bust?

It’s not just music or bust, but making things that I really love and really believe in, and for me that means pushing myself, trying new things, and trying to keep fresh. But I’m just saying that for another person, the temptation could be to go towards the middle of the road as they get more successful with the false idea that they’d get more fans that way. I’d rather make records that I love and let the chips fall where they may.

It’s interesting the way the album uses instruments – especially the horns on ‘Digital Witness’ – in a very distinct, rhythmical way, similar to ‘Who’ from Love This Giant. What is it about this way of playing that attracts you?

I wrote that song [‘Digital Witness’]…to be perfectly honest with you, I was half asleep in my bed and I just had this idea for a melody. And you know that feeling where you’re really cosy, but you have to wake up? The idea was too compelling, so I went to my computer and the first sounds that came out when I was trying to get the idea down was [imitates the horn blasts]. So it was on the demo, and I thought: “I’ll change this when I get to the studio; it’s horns for now but I don’t wanna do a horn thing because I’ve just done one [‘Who’].” With David [Byrne], we got to use actual, massive horns, and I was thinking when I play live I wouldn’t have any horns, so I should just stay away from them. But the thing about it is that very few instruments speak like a horn, and that line, because of the tempo that it was, needed to have that Prince-y type vibe. I searched high and low, and I couldn’t find another synth or instrument that spoke like that. It couldn’t be guitar because it sounded like the Jesus Lizard – whom I love – but it just wasn’t right for that bit; it sounded a little to meathead-y.

Did you take anything specific from working with David into the making of this album?

Not specific precepts per se, but I spent a lot of time with him and had the real pleasure of becoming good friends with him. He’s very fearless, and that’s infectious. I just think he’s such a great artist, and a really wonderful and generous person to boot, which is probably a pretty rare combination in the world. He’s rare and special, but everyone already knows – I’m not saying anything new.

Do you think you might collaborate with him again in the future?

Well, I’m not not collaborating with him, but we don’t have any plans or designs on that right now.

‘Bring Me Your Loves’ is the most out there track, and I read how it was inspired by Pantera and Turkish folk music. How did you end up listening to such diverse influences?

I’m from the suburbs of Dallas, Texas, and Pantera is the music that I grew up on. That heavy metal, rock thing was very dear to my heart; I played in a Pantera-Maiden-Megadeath cover band, and I love that stuff. I was hanging out with my best friends, and we got on a nostalgia kick and put on ‘Cowboys From Hell’. I was totally raging to it, and I remembered how amazing a guitarist [Dimebag] Darrell was. And then I was introduced to this Selda record – she’s a Turkish folk singer from the 1970’s – and I just fell in love with it.

That’s another song that originally had a slightly more straight-ahead rock beat behind it, but it felt a little too much like Pantera. My friend McKenzie from the band Midlake came in to play drums, and we tried the song again. He started doing this New Orleans, Zigaboo Moliste-type beat under it, and it really worked out and put it into a new world. It’s half referencing things I like, but putting all this together feels new; I remember hearing it for the first time through the big speakers and it was crazy.

Who is ‘Prince Johnny’ about?

It’s about a friend of mine.

Is there an interesting story there?

Yeah, there’s an interesting story, but it’s kinda told verbatim in the song.

OK. So what inspired you to write about this friend?

I was also curious about the line in ‘Severed Crossed Fingers’; “The truth is ugly / Well I feel ugly too”. What do you mean by that?

I didn’t mean it literally…I mean exactly what it says. I think everybody feels like that at some point.

Martin Aston’s book ‘Facing the Other Way’ really put 4AD back into the spotlight last year. Is there any particular reason you left the label?

There are no hard feelings. My contract was up with them, and I had to make a decision whether to stay or to go. There was a good team elsewhere, to get new blood around the project, and so I went somewhere else. So no regrets.

St Vincent is released via Loma Vista/Caroline on February 24th. To pre-order yours and check for upcoming live dates, please click here._