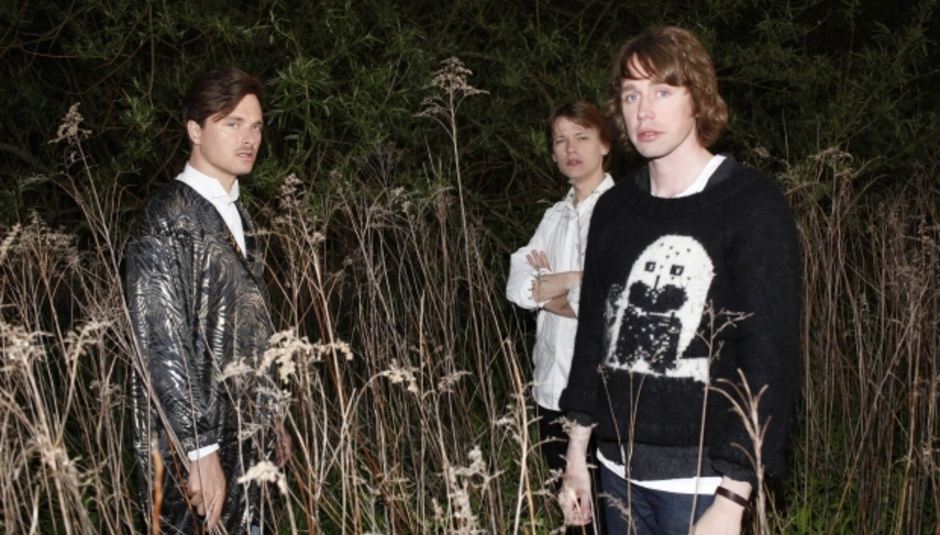 It’s more or less a decade ago now that 17 year old me was sat in the sixth form canteen enjoying my miniaturised world of freshly-pressed MiniDisc compilations and whatever clattering post-Strokes VO5 indie that NME had endorsed that week. A pal shoved an earphone in my direction and out poured the symphonic Pandora’s Box of ‘Am I Wry? No.’ Within three minutes this pristine bauble of a song warped my brain and set me along a path of Scandinavian discovery that Mew have always provided the heartbeat of.

In case you’re uninitiated (as Mew surely belong to the category of bands for whom people either love or haven’t heard yet) then have a look at the following.

Otherwise, you’re probably familiar with the Danish band’s triumphant follow up And The Glass Handed Kites and 2011’s DiS fan-favourite No More Stories....

So, having parted company with major label Sony, where next for the band? We caught up with Bo Madsen to find out.

Bo: We just came to Indonesia where we’re playing a show tomorrow night and then we’re going on to Kuala Lumpur and then playing Hong Kong and Singapore so we’re on a little Asian Tour. It’s a break from the studio for us as we’ve spent a long time writing and six months recording the album already. Getting out and seeing the crowds reminds you of one of the dimensions of why you do it, to create this bond with people around the world.

So what can we expect from the new album, I’ve heard you’re working with the producer of Glass Handed Kites, so is this a return to that kind of epic scale?

The sound is huge, it’s sounding great and that’s partly the reason why it’s taken us so long to record. We haven’t been compromising with anything on the sound, so for example we spent about a month just setting up guitars before even recording anything. The way this record is we can’t really compromise on anything. Musically, the new record is less ‘proggish’ in a way and the songs are very different to each other, even more than they have been before. Every song is its own little person or world, we’re trying to get away from the idea of the record being stylistically based around one sound. As musicans we’ve all advanced as well so it’s actually really exciting for us.

What are your plans for live shows. Last time I saw Mew your visuals were an integral part of the performance, is that set to continue?

Well we have been going with that for many years so we’ve basically just torn the whole thing down and we’re rebuilding a whole new live show along with some German designers. All Summer it’s just been us on stage and that’s been really fun, but when the new record comes we’re going to have a new live show based around that.

Do you have a title for the record?

We do yes! But it’s still a secret. Though actually it is out there somewhere so if people look for it they can maybe figure it out, but it’s not official yet.

Is this idea of throwing hints and previews of new material part of the idea behind launching your own app, Sensory Spaces?

The app idea came from multiple perspectives. One of the reasons was to get songs out there quicker a little while before the record came out to build up and re-ignite our core listeners. Plus we wanted to work creatively with a new group of people to put our music out there. As well as that now we’re no longer with Sony it helps to finance the record as we’re running the whole show ourselves. But mainly it’s an outlet for the music and another way of making people aware the band is here. It’s not enough to make records any more, you kinda need a whole marketing campaign to get your work out there now. But if you turn it around that can actually turn into something good and creative .It doesn’t have to be negative and we try to apply our musical creativity to it.

So is Sensory Spaces your way of responding to the increasing digitalisation of music?

Yeah it’s definitely a way of playing along with how the industry works but finding a new way to make the process our own. I think the thing is that if you start using Twitter etc you can sort of get self-absorbed and develop a ‘me me me’ sort of attitude. But you can also communicate one to one with your fans and that gives them another dimension to the music so – it doesn’t make sense for us to be doing as or whatever, we have to do things in a creative way so this app was a way to let people get behind the scenes of the new record

As part of Ja Ja Ja festival you’re playing with other bands from Scandinavia, do you feel part of a wider movement of bands from that part of the world? As I’ve always regarded Mew as a band who operate independently from others...

No its like how you describe, its kinda a shame in a way as it does feel good to feel part of a movement but it’s never felt like that. Funnily a lot of bands like Mew so in that way there’s a connection to the outside world – but it’s true that we never fit into any categories.

Would you say it’s for your benefit that you exist outside of the hype bubble that can see UK bands boom and bust within a short space of time, often through no fault of their own?

Sure, when you get signed to a major label you feel like ‘yeh lets do it’ but for us it was always a gradual growing of the band – I like what Michael Stipe said that the longer it takes for a band to get up there the longer it takes the same amount to get down the other side. But we’re into this band for life as we grew up together before we started making music together. We feel like we still have our best music to come.

How is the band different now you’re no longer on a major label?

Well it’s more work but that’s also fun. One of the things with Sony I didn’t appreciate is that they weren’t getting the record out to places like France and Germany. So when we put so much work into a record to have people work with them that don’t really care about can be shitty. So on this record there’s only people involved who really care and in my opinion that’s how you get the best results anyway. In a way you’re on life support when you’re on a major label, they put you on tours which lose money, like you’ll play to a few people here or there and that doesn’t feel great. Like supporting other bands, I don’t just see that happening, it doesn’t feel good any more. Now we don’t have this whole system behind us telling us what to do it feels more free.

You’re known for your innovative artwork, is that something we can expect of the new album?

Yeah we’re still working with the French Paris guys who made the last couple of albums and they’ve come up with some cool stuff. We’ll probably be doing a box set with different goodies and a limited edition hundred hand painted covers and stuff like that so we’ll be branching out in that way. There’s the new logo and quite a few surprises that we’ll be revealing in the coming weeks.

Mew play at Ja Ja Ja Festival which takes from the 8-9th November at the Roundhouse in London. Full details can be found here.