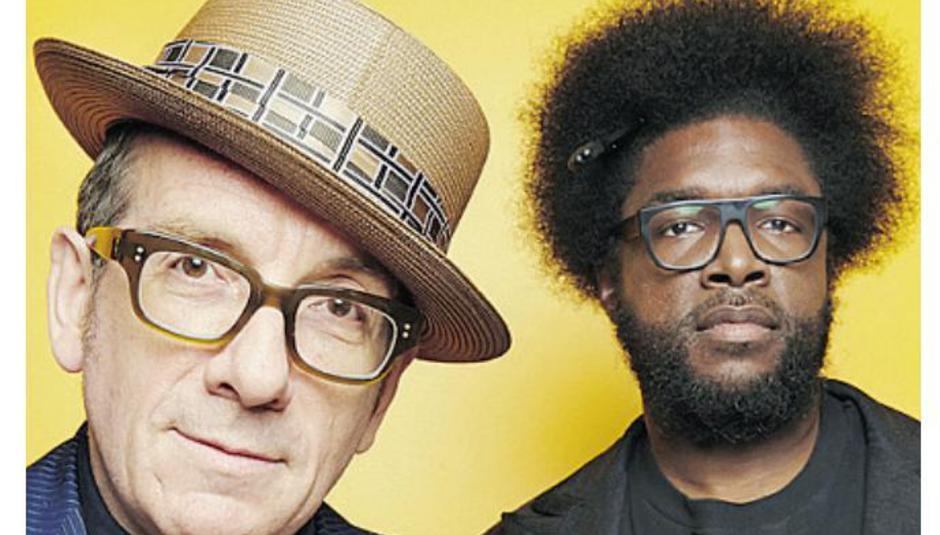 This writer's parents, friends and various acquaintances have all told him on various occasions that he looks like a lot of different famous people, none of whom look alike and none of whom really look like him. Justin Timberlake, Jeff Tweedy, David Lynch, Jacques Villeneuve, Pete Doherty, Jarvis Cocker, Rivers Cuomo, New Zealand slow left arm bowler Daniel Vettori, a meerkat, and two fifths of Radiohead have all been mentioned by folks of varying sobriety. The one that comes up most often though is “Hey Dan, you ever been told you look a bit like Elvis Costello?”

Yeah, I have, and moreover I’ve always felt some kind of affinity with the guy. Perhaps he’s not as revered as the likes of Dylan, Morrissey, or the bloke out of Bright Eyes, but the one from DiS who looks a bit like him will always belong to that small part of British society that considers Costello’s acerbic songwriting to be the zenith of the craft. So heading down to a neat Soho hotel for a couple of beers and a playback of Wise Up Ghost – an intriguing sounding collaboration between Elvis and The Roots – and a brief Q&A with our hero, DiS was so excited he even managed to tear himself away from The Ashes, where Australia were nine down on the brink of an embarrassingly massive first innings deficit.

When the guy, looking every bit the elegant rock star clad in navy pinstripe suit, horn-rimmed glasses and Panama hat, shook DiS' hand and we spoke briefly at the end of the day, we might have gone into gushing fanboy mode. Fortunately, before that, I managed to write down a few initial track-by-track thoughts on the album. As Larry David would put it, it’s prett-ay, prett-ay good.

The Roots’ scuzzy, lo-fi production is all over this. The music is noisy and discordant, whilst the keyboards sound a lot like The Specials. Elvis sounds angry and vitriolic, which is great. Huh, this took up a lot more space in my notebook.

This one’s a lot smoother. The whole song is built around a very funky bass line, with the odd keyboard thrown in purely for colour. On the vocals, Elvis appears to be channeling Motown. Again, I thought my notes would fill more space than this. Could be a short blog.

I know I used the word “funky” in the previous blurb, but I’m short on synonyms. This might be the funkiest Elvis has ever been, with chopped up drums, spiky industrial guitars and sporadic ascending and descending keyboard fills making this one a little bit disco. I’m liking the way the instruments get progressively busier, until it sounds like Chic-goes-new wave (as far as I remember).

You know what? This is the most ambitious he’s been in years. Certainly it sounds like he’s having a shitload of fun. Although weirdly these first few songs have all been joined up by this strange, Disney string interlude thing.

Ahh this one’s slowed down a bit. A low, bluesy number with Elvis adopting his deep and soulful voice for the first time on the album, this one has some very cool jagged guitars intersecting neatly with the horns. In fact with these gloriously dirty production values it has a Tom Waits feel to it.

The key words for this album I reckon are “lo-fi”, “scuzzy” and “dirty”. Somehow even the mellow fairy chimes that sparkle on this track have that kind of feel to them. They kind of remind me of one of those mobile things you’d hang above a kid’s cot at night, and are neatly backed up by a choir on the chorus. Sad sounding vocal is a little bit safe though, which is disappointing.

Ahh this is ‘Pills and Soap’! The combination of subdued, sawing guitars playing funky licks and keyboards that sound a bit like Brian Eno circa My Life in the Bush of Ghosts probably shouldn’t work, but it’s pretty neat actually. Elvis’s voice has been lightly computerised too, and the multitracking is great.

A title that makes as little sense as my scrawled note: “Speaker-shredding guitar feedback then cuts into what sounds like a hip-hop take on a New Orleans funeral march.”

Elvis is apparently very fond of chanting the odd line repeatedly; by my count this is the third song on the album where he does this. It’s probably the most minimal track on the album, the keys and acoustic guitar struggle against choppy, cracking* drums. I’d guess this one is about 90% ?uestlove.

*Take either meaning of “cracking”, both work

Apparently this one is revisiting ‘Shipbuilding’, only from an Argentinean perspective. Despite this, it's perhaps the most “British” sounding thing on here: it could have been written in Bristol circa 1994. What with the whole trip-hop thing here, the Spanish vocals from La Marisoul do seem a little out of place, although they obviously fit the theme of the song.

Ooh this is nice, a kind of smooth, coked up, lounge jazz thing. In a way it’s oddly reminiscent of Wilco’s masterpiece ‘Jesus Etc.’ with the production preventing Elvis’s vocal from dominating. I like the neat little ghostly, fluctuating sirens in the background of this one.

There are some very theatrical, operatic strings that open this one, which I guess is kind of a nod back to those Disney string interludes I mentioned earlier (they’ve stopped now). Actually these string arrangements are taking on a very John Paul Jones quality now, added to pounding polyrhythms and bluesy guitars it almost sounds like Zeppelin. I like the way it builds a sense of dread but keeps the vocals grounded.

Ah the hopeful yet sorrowful climax (shut up). I guess this is a quintessential Costello ballad: the emotional vocal, the sad cynicism in the lyrics. Oddly it’s just a piano track, with no obvious input from ?uestlove (dear god I hate typing that out). Still, from a thematic perspective it’s a great closer... and hey, that Disney motif thing is back!

All in all it’s a lot of fun. The hip hop influence on the veteran rock star isn’t anything like the disaster you might fear, and in fact helps him sound fresher than he has in years. It’s a very politicised, angry record too, and the ramshackle production gives it a Tom Waits kind of sound on more than one track. It’s certainly one to look out for later this year anyway.

Right now back to the crick... aw fuck.

Wise Up Ghost will be released on 16th September via Blue Note.