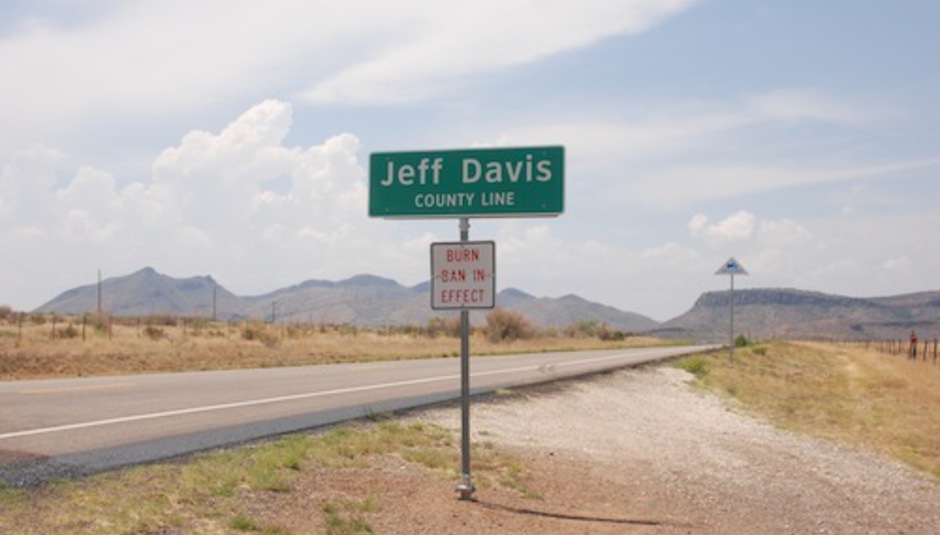 Between the message boards and editorial arm of DiS, we’ve always felt discussion of new records should be presented as just that - a discussion. Our humble boss-on-high Sean Adams once described the site as "an aggregator of individual opinions", and it’s in this spirit that we introduce a new feature: two writers, with two clashing opinions on one canonical record (- Read the previous installment - 'Fighting Over Radiohead's Hail to the Thief' here). Naturally, neither presents a DiS 'party line' - these are two fervently passive-aggresive fanatics, serenading the abyss to their hearts’ content. Maybe it’s a move towards total subjective transparency in music reviews, or maybe for you this all falls under the same cynical umbrella. Probably you’re thinking, ’I don’t care, stop talking to me. I have a family and cat to feed’. That too is totally understandable. In any case, here’s the third installment, which celebrates the reissue of the Mountain Goats’ cult favourite, All Hail West Texas.

The Best Ever Lo-Fi Folk Album in Texas, by Jazz Monroe


Between jobs in the summer of 2001, John Darnielle penned his twelfth album as The Mountain Goats. A former psychiatric nurse, Darnielle had relocated to Iowa with his wife Lalitree after being turfed from a socially inconvenient home the council razed. He found psychiatric work and, during the orientation period, drafted lyrics in the margins of psychiatric managerial handouts. The songs materialised via one primitive, pocket-money boombox - ‘complemented and complicated by some pretty ferocious wheel grind’, as Darnielle puts it - that he miraculously resuscitated while Lalitree was at a women’s hockey camp in Banff.

The above backstory, further detailed in the reissue notes of All Hail, could just as easily belong to one of its characters. Looking closer fact and fiction start to feel indivisible. Darnielle’s characters are imaginary, but given the vulnerability and cold compassion he projects his “I”s might as well be just that. His creations change bins, drink together, feed one another. In the gaps they flounder helplessly, dangle between defeat and minor redemption. They are, essentially, smalltown fuckups - impulsive, drained, overdrawn and underwhelmed. In true smalltown fuckup fashion they believe escapism (physical and cerebral) will not only magically reverse their fortunes but somehow enrich and immortalise them, like film heroes perpetually cusping a third act. And maybe they are - we never stick around to find out.

Like the dusty, defunct tape recorder that digested All Hail, inhabitants of Darnielle’s universe verge on disrepair but decide arbitrarily to spring back into life, albeit with cranky motors. Harnessing minor stories in major keys, Darnielle renders smalltown quandaries with massive humanity, his dramatic rhythm nothing short of remarkable, smalltown quandaries being hardly the bustling hub of psycho-geographical subject matter.

On first listen these songs stirred distant intrigue. A few months on, each one was on old friend. Years later, it’s simply one of the greatest albums around.


People warn me the lifestyle of excess is dangerously seductive. Prolific spending, drinking, smoking. To wit I reply that I’ve given up dozens of times. Such vices hold special sway in the thinking man’s heart, and in seriousness, the ferocity of their magnetism bespeaks something essentially human, a certain spiritual rigour.

One past-time of which I am gladly rid, however - one of diminutive rigour or spirit - is the curious act of venerating lo-fi indie music for its ‘literate’ qualities, while making drastic concessions to the form’s limitations. Here is my admission: notionally cunning songs, bookish songwriters, whip-smart narratives - these rarely excite my cerebrum. Not for lack of exposure, you understand; nor for want of sophistication in my palette. It’s a matter of dignity, a spiritual frustration. Call it cynicism, I won’t stop you.

When I label the Mountain Goats limp, icky, repellant, I suggest not that they fondle the nethers of that repugnant whore of a genre alt-folk. The blemishes of All Hail West Texas are but pimples beside the odious ulcers that run athwart Bright Eyes and his ilk. Rather, I believe the album dilettantish. A work of fey, fetishistic pabulum. Glorified, like all its type, beyond rhyme or reason. A great indie-rock swindle, albeit momentarily convincing.

Yes there is talent, but in moderation. I can’t help noticing you perfectly score All Hail, and I think I see why. Clearly you belong to that bespectacled subset unaccountably charmed by obnoxious tape hiss. The singer’s nasal deficiency strikes you as admirably rigourous, perhaps, or authentic. Plus, Darnielle was an addict. Maybe that resonates with you, somehow. I suspect a grim narcotic fate has recently befallen yourself or a close family member.

But let’s pursue an objective analysis: in seriousness, do the bonus tracks on this reissue feel, to as doubtlessly knowledgeable a gent as yourself, like offcuts from a faultless sonic masterwork? Like the priceless shavings of Michelangelo’s David? Like the draft of some transcendent holy scripture? Do they not bear greater semblance to perhaps a Duchamp than a Da Vinci? I shan’t presume, but only, it seems fit to ask.

JM: I suppose you kind of might have a point, but it’s a more complex thing, isn’t it? A great folk record becomes like a companion. All Hail is just that, and the reissue’s extras are a long-estranged cousin - one you could have loved as a sibling, but it’s the early years that count, you know? So while ‘Indonesia’, ‘Tape Travel is Lonely’ and ‘Waco’ are welcome accoutrements, they’re a separate beast altogether. This, needless to say, is fine.

As for your understandable impatience as regards sound quality, it’s simply that taste can be independent of the artist’s means of delivery. A better way to put this would be: it’s necessary to distinguish the parcel from the present. As advancing technologies come between listener and music - synths, cables, processors, remasters, bit rate conversions - what’s increasingly important is that we at least feel close, and on All Hail we absolutely do.

A kind of cold, grainy air permeates the record. ‘The Best Ever Death Metal Band in Denton’ is a paean to two lank-haired boys who pursue their obsession with parent-baiting music all the way to reform school. From there Darnielle’s authorial voice weaves through the following thirteen tracks, one-liners, two-liners, triplets, verses, whole songs of piercing observation. On ‘Jenny’ a date-goer gasps euphorically, boasting of “nine-hundred cubic centimetres of raw whining power / No outstanding warrants for my arrest”, somehow suggesting the litany of lapsed indictments is long and long-forgotten, though perhaps for not much longer.

But while emotionally attached, Darnielle maintains professional relations with his characters. The most egregious instance of judgement or didacticism is a cursory “you made a bad decision or two”, addressed to the jockish hero of ‘Fall of the Star High School Running Back’. In the song, following precocious sporting achievements (“an average of 8 1/3 yards per carry”), injury (“nothing but the ground left for you to fall to”), new friendships (“with people you used to look down on”) and a foray into LSD salesmanship (“a bad idea... And selling it to a cop was a worse one”), the urgent momentum cuts short just as it gets juicy, not unlike the protagonist’s career.

On All Hail West Texas the Mountain Goats set a standard that continued to flourish throughout their higher-fi 4AD and Merge output without reaching greater heights. Which is hardly surprising, because a work of superior poignancy would be heartbreaking, distressing and frankly unimaginable. Still familiar to the Goats’ setlist, ‘The Mess Inside’ sees a loveless couple let go and finally admit that “a weekend in Utah won’t fix what’s wrong with us”. Listening to such minor unglamorous revelations, you can’t be untouched. Their abyss-staring bluntness, like each of Darnielle’s missives, is as completely terrifying as it is wonderful.

FL: Ah, man, I wish not to argue; your descriptions compel, certainly. And clearly it’s a heartfelt work, quite apropos on the theme of smalltown drama and domestic strife. Besides, one mustn’t focus solely on lyrical and aesthetic concerns; there are further considerations. You may believe Darnielle carries in his vocal the emotional richness of a master novelist’s sentences - entirely possible. You may submit that where Rachmaninoff reclines in symphonious splendour, Darnielle implies similar riches via some natty syntactical flourish - a valid position. That the singer may not soar, but in his wibbling croak there is humanity enough to endear.

Of course, I differ vehemently. Far from complementing the narrative flow - a swoop, a crescendo - the music is simply grating, a clapped-out vessel for words that offer little appeasement, if you will, to the seasoned reader. Never does the album strike a narrative jackpot to warrant the necessary investment. At forty-two grainy, moth-bitten minutes - more with the extras - it is overlong and outdated; it is the torturous realisation of finding oneself locked in an ATP chalet, subjected to the abhorrent whim of an Elephant 6 alumnus in the process of ‘going Dylan’.

Nonetheless, I dismiss All Hail West Texas not on account of being unimpressed but unmoved. For why ought one lavish with numeration an album unlistenable beyond morbid curiosity? Forgive my hardline rigour, but there are pleasures on which I would sooner gorge, than that of distributing ratings of delusional generosity, to records deserving no higher praise than a patronising pat on the head.

Still. We are welcome to our opinions.


Or the second - 'Fighting Over Radiohead’s Hail to the Thief', here