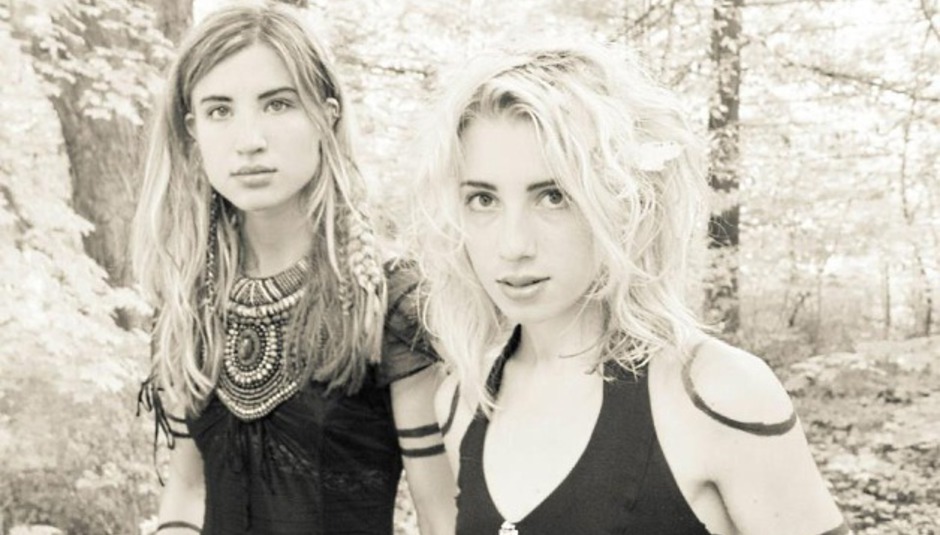 Chaos Chaos recently emerged from the cocoon of Smoosh and offered their debut EP S to a UK audience. They’ve since put up a new single ‘In This Place’ on iTunes. With this flurry of activity the girls are quickly showing they’re back.

Talking on the phone to Chloe and then Asy to catch up on the years since their last offering as Smoosh - ‘2010’s’ Withershins - it’s hard not to get caught up in their carefree attitude. They don’t know what’s round the corner, hopefully it’ll be something fun but if it isn’t, it won’t be the end of the world.

But Chaos Chaos did form from out of a big, serious decision: to change their name. That might not sound like much in itself, but having amassed critical success over three albums and a trail of support tours bands only dream of (Pearl Jam, Death Cab for Cutie, Sleater Kinney, Sufjan Stevens, Jimmy Eat World) as Smoosh, it must be a big deal to leave that identity behind. They’re not kids any more, they’ve been through stuff and sometimes unfortunate co-incidences can put a final nail in the coffin, as Chloe explained:

CS: It’s kind of ridiculous. I don’t know if you have it, but the programme Jersey Shore? There’s a cheesy character called Snooki. I don’t know if it’s still around and I didn’t know about this until I started to search Smoosh on the Internet and it started to bring up all this weird Snooki stuff.

She’s a main character in Jersey Shore and she started to use the word smoosh to refer to a ‘hook up’. A lot of people on the Internet started using the term and it got to the level where there’s a South Park episode called ‘Snooki Wants Smoosh Smoosh’ and the character goes around humping all the South Park characters. So Asy and I decided... time to change our band name…million-dollar lawsuit right now.

DiS: Yeah, it’s kind of cool to have your old band name canonized in a way, but that’s not quite what you had in mind I’d imagine. Have you ever met Snooki? Is she a fan, is that where she got the term?

CS: Of course. We're actually buddies. We party together on occasion.

DiS: It’s great that something like that doesn’t faze you. I’m guessing you’re fairly unflappable, as you’ve made another quite big move in heading from Seattle to New York. Did you move to New York to get the space you needed to create this new identity? How did the move come to occur?

CS: Well we continued playing shows as Smoosh through until the end of 2010 for our third album. Then we actually moved to Sweden. It was a pretty crazy decision actually and it was a very personal, but our Mum asked us if we wanted to come with her to live in Stockholm and we were like ‘hell yeah’. So we went to school in Sweden for two years and we took a break from the music stuff. Our lives changed a bit at that point.”

DiS: That must have been very different.

CS: It was. I was going to a Swedish school and learning Swedish. I didn’t learn much schoolwork at all as I tried to keep up with what was going on in the classes and to understand what they were saying. So my school was pretty much just learning Swedish and Asy went to an international school in English, with people from all around the world.”

DiS: So there was no music?

CS: We did some music there because we’ve never done more than a couple of weeks not playing music, but in Sweden we couldn’t pursue it in the same way we did in the States. We played with a guy called Seabiscuit and Asy sang on the ‘God Help the Girl’ project (Stuart Murdoch’s ongoing cinematic musical melodrama) but we started to miss making our music so much, so we started up again.

With this decision we thought though, if we’re going to go back to music, we really have to make it different from what it used to be in terms of starting up with Smoosh again. So we should change our name. We’re thinking about music a lot more differently and we’re ready to commit to something full-time, so we started Chaos Chaos.

At this point Chloe makes her excuses as she has to go as they’re splitting press interviews. Asy, who had been listening contently until now, is left to pick up the thread...

DiS – So Brooklyn’s now the culture that’s influencing Chaos Chaos? Has the Seattle influence been left behind with the old band?

AS: It’s kind of funny because we’ve been in Brooklyn for two years and I feel like we only now starting to realize the great things about living there. It takes a while to really become part of a place and we are getting to know a lot of people here now, but it’s so funny to hear the term Brooklyn band as we’re so used to the term ‘Seattle based’.

We’re currently on the Seattle peninsula in an old wood cabin writing the next album so as you can see Seattle hasn’t been left behind at all - it can’t be. But as people and a band, we’re doing something new and that’s really important to us. It’s pretty exciting to take this opportunity, you don’t get so many chances in your life where everything pauses for a little bit and you can decide how you want it to be again.

DiS: ‘S’ makes a very clear statement about you now, as a new act. What were you aiming for with ‘My Hands’ (the lead song from S) and your first recording away from Smoosh? It must have been in some ways intimidating to put something down definitively?

AS: We started writing songs right when we moved to New York and we were writing for a little while just so as we could consider how we wanted our music to sound... what we wanted our new band to be.

‘My Hands’ was really one of the only songs we’ve ever done that had a complete vision behind it. It was like a homework assignment for us, but a fun one. We had decided that we had wanted to try and write the poppiest song we had ever written and we wanted to then simplify it and not be indulgent at all with the music at all and to strip out everything that didn’t work. So we worked on the song for a long time in just stripping it down.

DiS: For the EP you worked with both Nathan Rosenburg and Matt Tong from Bloc Party, how did you decide on two very different producers?

AS: Both producers were literally to do with block parties. We toured with Bloc Party in the past and would always try to meet up with Matt wherever we could so we’ve somehow been able to keep in touch with him. I was just emailing him randomly to check to see how he was and didn’t realise we were both living in New York. When he told me that he’d just moved to New York we had to meet up. I told him we were getting ready to record an EP, so we decided to do one song together.

With Nathan it was coincidence that we met him. He lives on our block and there was a literal block party. One of neighbours convinced us to play it but we didn’t have any of our own speakers or anything. It was kind of crazy that we were playing. We blew one of the speakers that were being used and Nathan came to the rescue, basically. We didn’t know there were any other musicians in the block but he came out of his house, fixed the speaker and made our set up sound awesome. It was quite a situation. From it though came an opportunity for us to work with him on the EP.

DiS: And what was it like using a Kickstarter campaign to help raise funds to tour and promote the album?

AS: It’s something that is happening right now and it works for a reason. As a band, it’s harder to come by labels. If you do want to play live and possibly travel you have to think of ways to get around the challenges. With the new model, it’s a good way as the fans can help you and they are connected, so it feels like a musical family, which is really cool.

The only thing I would be worried about is over using it, because it seems so easy so you could go ‘oh, I’ll just get money from the fans again’. I don’t want to do that. I just want to have decided projects where you think it would make sense to get help from the fans but it’s been really helpful so far and I’ve been really happy with our campaign. We’ve really benefited form it and I think the fans like it too, we can offer more interesting items.

DiS: So is the EP an introduction to what we can expect for the album?

AS: S is a reflection of up to now and we’re excited about going full into the writing of the next album. There are certain things that we know we want to consider. We definitely want to be influenced by the place that we’re in, as that’s a natural way to write music. We’ve also been talking a lot about the vision of the album.

With the last Smoosh album we went all the way into experimenting with weird sounds and being pretty self-indulgent with music. We did the exact opposite with the EP - kept it simple. Now that we’ve tried both of those we’d like to go for something in between. We still want to be really adventurous with the music, but to hone down on styles and simplify everything because. A lot of the new material we’ve started writing definitely has the simple pop element that was on the EP but it sounds a little more experimental or maybe adventurous. If we’re more ambitious we can’t know how it will turn out but it will definitely be fun.

DiS: Even since the EP you’ve put up a new video online, ‘In This Place’ which is now available on iTunes. What’s the idea behind this as the video is quite strange, with you playing typewriters as keyboards in front of a crowd of robotic office workers?

AS: ‘In This Place’ is about the battle between emotional and mechanical. When making the video we were influenced by a whole series of works that also talk about this battle, plus we’re science fans, so ‘The Iron Giant’, ‘Artificial Intelligence’, Hal in ‘2001 A Space Odyssey’ and ‘The Stranger’ by Albert Camus.

The video was made to portray this conflict through the lens of a working New Yorker, robotically working and living a routine life, losing the human inside. The machine is taking over. It’s also an inversion of these stories where the machine turns human-like. We wanted to show that the suited people in the cafe are dehumanized and have turned machine-like. When we run out of the cafe that's when we break free from this trap.

S is available now on iTunes.