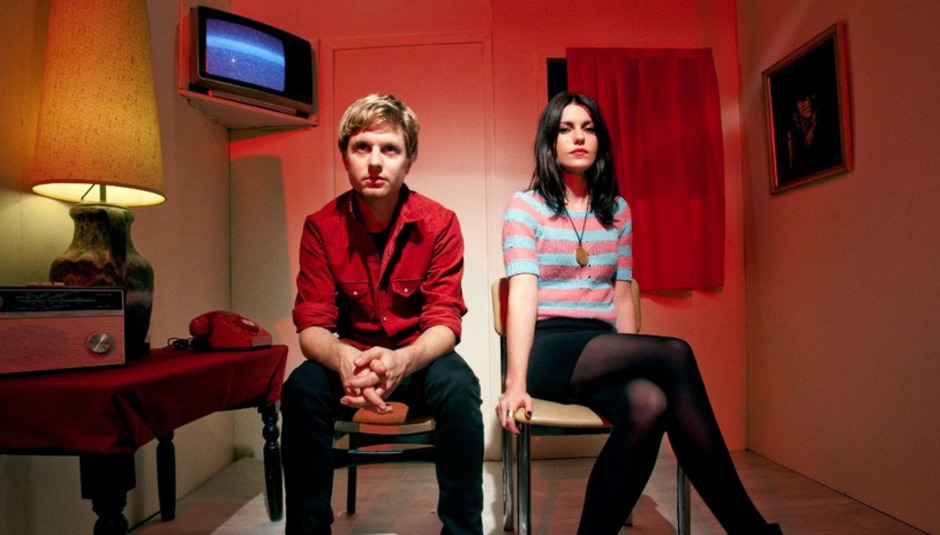 On Monday, DiS' favourite guitar-thrashing, drum-thrashing, stage-thrashing, crowd-thrashing, duo Blood Red Shoes follow-up the Radio1-bothering Fire Like This with the release of their eagerly anticipated third album. Here, Steven Ansell walks us through the new album In Time To Voices...

IN TIME TO VOICES

This was written one day when we were jamming about in our studio and we'd not come up with much that day, I went to buy a load of wine and came back to find Laura singing the opening melody and playing this guitar sound that she'd made into some kinda weird church organ vibe. She thought it was shit but I stuck a mic on the guitar and on her voice and made her tape it then spent about 2 weeks trying to convince her that it wasn't shit, it was great. It worked in the end and now it's one of our favourite songs we've ever written.

This was written bang in the middle of the "London Riots", at the time the images on TV were of streets on fire and smashed up buildings, and strangely Laura and I were fighting like crazy at this point. It just felt like there was a lot of destructive, frustrated energy in the air, but we didn't want to write about it as an overtly political song, so this is an attempt to bring together all that into one. It does feel like there's a lot of lost souls in the world right now.

This started out fucking ages ago as a jam in soundchecks. We can never work out songs properly in soundchecks because all the venue stuff stand around gawping at you and it's hardly the ideal environment to start singing your heart out, so consequently we didn't finish it until after we stopped touring Fire Like This. The idea of the really fuzzy, low guitar sound is that you can't tell if it's a gnarly synth from an NERD song or a guitar. The tempo is a total hip-hop groove (some people questioned me about that but I don't think they realize there's more to hip-hop than Eminem) and we really enjoyed playing with that.

This is by far the most druggy, psychedelic song we've written so far - it's all swirling vocal harmonies and fuzzy keyboards. There's barely any guitar or real drums until the end of the song - it's all drum samples we made and processed then looped in pro-tools. If you listen to it next to "It's Getting Boring By The Sea" I think it sounds like a totally different band. So far everyone we've played it to has compared the vocals to the Beatles or Fleetwood Mac and that sure as hell never happened on our first album.

THE SILENCE AND THE DRONES

We've been trying to write a song like this for years. I think the earliest roots of it are the song "This Is Not For You" on our first album, but it took us ages to get a handle on how to make something more melancholy and more cinematic than what we used to do. I hope people find it fucking heartbreaking to listen to because that's what it's supposed to be. It's also my favourite song we've ever written.

On this album we had a lot of different feels to play with and it was really crucial how we ordered the songs. This song feels like the end of chapter 1 to me, like in a movie it'd fade to black for a second before part 2. Laura wrote the verses in the middle of the night whilst I was asleep, and when I woke up she'd gone but there was this scribbled set of lyrics lying there, which I then finished by writing the chorus. It's one of a few songs on the record which seem to refer to ghosts, I have no idea why that theme kept coming out in our lyrics but it did.

In late 2010 we toured the states for a month or so, including a couple of shows at CMJ which is an industry bullshit thing in New York we should have avoided. Anyway the first show was full of douchebags and it sounded shit, we were drunk and fed up so we got about 3 songs in, threw all our rented backline into the audience piece by piece, then fucked off to the Mars bar across town and went power drinking. This song is about where that night ended.

This was a bit of a writing experiment. It started out as a keyboard part which then got transposed into a guitar part, then we set up a one-note guitar loop on pro-tools and tried an experiment to see if we could still make a decent song whilst we're restricted by that loop. You can't change key and you can't change tempo when you're stuck to a rigid loop. The whole writing process for this album was about forcing ourselves to write in different ways and imposing different restrictions at different times to see where it would push your creativity.

I don't think we realized how much we'd enjoy playing acoustic stuff until this album, which has two songs dominated by acoustic guitars. This one is a bit more bluesy and almost reminds me of the Rolling Stones although obviously neither of us sing like Mick Jagger. Again it's full of vocal harmonies and is one of the most layered songs we've ever recorded, which is why we'll probably never play it live. We decided with this record it was time to get a bit Sgt Peppers and use the studio to its full potential rather than worry about the implications for live shows, and this is one where we really went as far as we could. In fact speaking of the Beatles it ends with a mellotron.

DOWN HERE IN THE DARK

You know that stage early in a relationship where you're both just consumed by total lust? Where you can't leave each other alone and you're just fucking all the time and never sleeping? And you exist in this weird other universe to everyone else around you. It's good isn't it?

As a band we're pretty fucking tired of love songs. We basically have a rule not to write them. And that means that those kind of feelings we have get twisted and expressed in different ways to how boring bands write those boring obvious songs....so what I'm saying is this is our kind of version of a romantic, slightly nostalgic, heartbroken song. My favourite thing about recording this was that Laura abused this hyper-expensive vintage Moog synth to get a new guitar sound- I guess she basically used it as a distortion pedal. Most rock guitars sound very very samey recently, it's like everyone just uses a preset sound. Mangling the fuck out of a guitar with an old Moog was a good way to get away from that.

In Time To Voices is released on Monday 26th March 2012. For live dates and more info visit bloodredshoes.co.uk

In Photos: The Portico Quartet @ York...