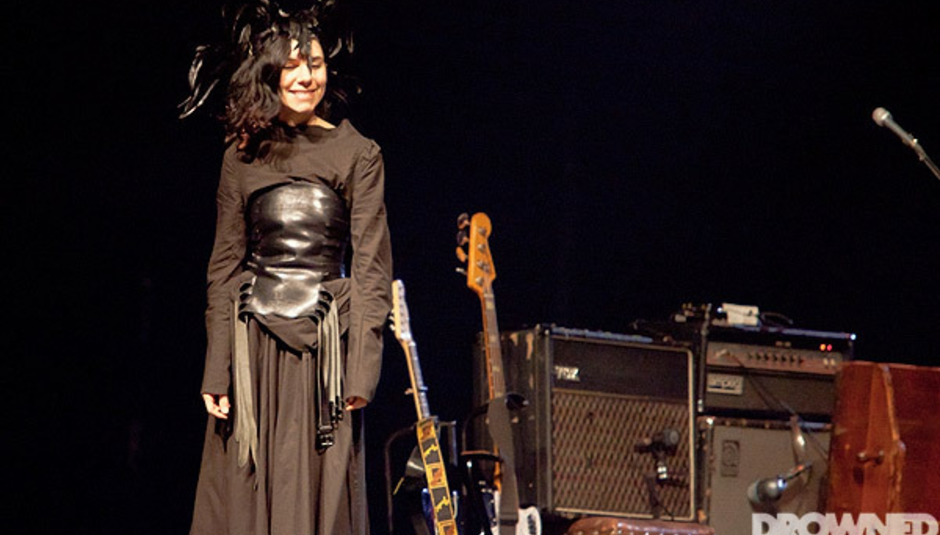 This week, we'll be counting down DiS' favourite 75 albums of 2011, with our top 5 revealed on Thursday. Before we do so, we thought you might find it interesting to see what each of our staff members named their number one record of the year.

As you can see from the photo above, Polly Harvey is grinning, partly because she's currently top of the Metacritic album of the year list-of-lists but also due to hearing that seven of our sixty-two staff have named Let England Shake their favourite album of the year.

Whilst we're on the subject of stats: seven of these number ones didn't feature at all on any other staff members' lists. The second most numbered one'd album was Kaputt by Destroyer, who had four votes, closely followed by Antlers and Wild Beasts, with three. However, this may not give you too many clues as to what is our album of the year because although this votes will be taken into account, we once again won't be totting up the staff votes, like some sort of staff popularity contest because we're well aware that what's most popular isn't necessarily the bestest of the best (see also: Rebecca Black, Jessie J and Coldplay).

DiS' year-end list form of democracy is approximated. It's a bit like a ouija board guided by our core team who've had the benefit of investigating a helluva lot of records these past twelve months, as well as by some of our genre specialists. Yes, I guess you could say it works a bit like the House of Lords. However, we also like to take into account what our readers have been loving throughout the year, and also what you've all been voting for as your DiS users' album of the year (you have until Jan 1st for vote for your top 5 over the boards). It's an imperfect science but this human 'curated' and approximated way of working seems to have made for our interesting albums of the year lists over the past three years and even in a time before that, we used to thrash out the top 5 over beer and biscuits until there could be only one...

Here are our staff number one favourite albums of 2011. Feel free to share your number 1 below.

DiScuss: Which of these number one album choices do you think didn't feature on any other staff members' lists?