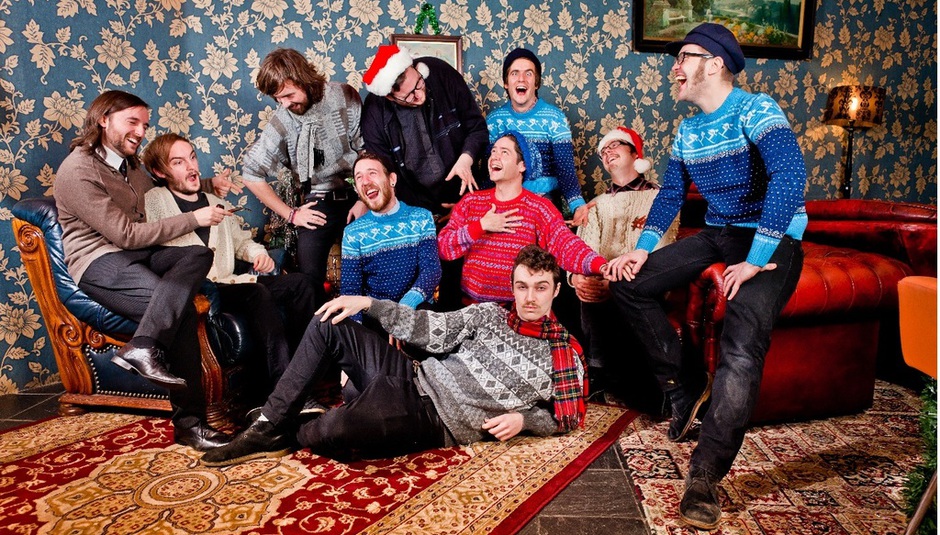 Last time this column went online, we were pleased to hear that The Leadmill had bagged itself a prestigious industry award. Well, now every other venue in Sheffield can celebrate too, because this year’s Tramlines festival, which they all helped to make happen, has won a gong of its own. The enormous three-day event was named as Best Metropolitan Festival at the UK Festival Awards. Although it’s only three years old, it beat the likes of The Great Escape and Camden Crawl to the prize, thanks to its mind-bogglingly diverse bill of local, national and international acts, it's incomprehensible scale and the fact that it doesn’t cost you, the discerning live music fan, a single penny. Roll on 2012!

New and forthcoming releases to include in your letter to Santa…

You’ll already be aware of Dorian Cox, whose career with The Long Blondes came to a tragic end when he suffered a stroke in 2008. Since then, thankfully he’s recovered and gone on to front Milkteeth. Now he’s founded Former Lover too, who have just released a limited edition split cassette with Nature Set. Of the two bands, it’s Nature Set who do the fuzzy, goofy pop songs, while Former Lover are altogether more chilling, guilt-ridden and gloomily avant-garde. Have a listen to the fiendishly addictive ‘He Doesn’t Have To Know About You’ and you’ll see what I mean, or see them live at Nether Edge Bowling Club on December 17th:

Mad Colours might just be The Heebie Jeebies with a different name, but the important thing is that this hyperactive, blissfully wonky trio are making music that’s freakier and more frantic than ever before. Their recently-compiled EP is full of slapstic hooks and syncopated beats that are sure to get mosh pits in a frenzy. You can listen to The Good Times Are Back over on Soundcloud. Also, keep ‘em peeled for Mad Colours’ split covers EP with another of Sheffield’s stars of the future, Hey Sholay, which should be on sale in time for the bands’ Christmas show at The Harley on December 23rd. In the meantime, why not have a crack at the Mad Colours treasure hunt, which started in Ecclesall Road and has now reached Leeds? You’ll find clues on the band’s Tumblr.

Fluffy folk troupe Little Robots also have a festive release hidden up the sleeves of their Arran jumpers – albeit one that’s a little bit more traditional. ‘The Christmas Song’ is a wonderfully relaxing way to while away a few minutes of winter and it’s got pretty much everything you could want from a twee tribute to December 25th – cute colloquialisms, motherly concern and lyrics about gritters. Listen to it on Bandcamp.

If that’s a bit wussy for you, try Wet Nuns, the blues-punk duo who reckon they’re from the Deep South of Yorkshire. Their long-awaited debut single, ‘Heavens Below’, has just about the chuggiest, slack-jawed, gun-toting riff this side of Pantera, and if you head to Soundcloud you’ll find a remix of the track by Matt Helders. Wet Nuns have got their own Christmas party booked in for December 21st at The Bowery.

The new EP by dreamy leftfield indie-poppers Cats:for:peru is also worth a listen. We Had This Problem Last Winter has got cartoon melodies, proggy quirks and cloudy introspection. To celebrate this release on local label Thee Sheffield Phonographic Corporation, each band member has been making Spotify playlists of their top tracks of 2011, which you can find over on Facebook. Also, check out the video for the Elbow-esque ‘Duck In The Oven’ below:

Things to see and do over the next couple of months…

As per usual for this time of year, there ain’t a whole lot of touring bands passing through Sheffield in the next few weeks, but there’ll be Christmas and NYE shows with the likes of The Everly Pregnant Brothers, The Crookes, Wet Nuns, Hey Sholayand Blood Sport to tide us over until January.

2012 will see many more DiS shows in Sheffield, starting with The Twilight Sad on February 11th, who’ll play one of our favourite venues in the world, the Queens Social Club. As I’m sure you know by now, Tumblr, Twitter and Facebook are the places to go for future announcements.

Also that weekend, another of our favourite Sheffield haunts is hosting three days of music to ease the impending pain of Valentine’s Day. Plenty of great bands have already signed up for the Cupids in Nooses Anti-Valentine's Festival at The Rude Shipyard.

Outside of music, revered doodler Pete McKee is bringing something different to some of Sheffield finest watering holes on January 20th. The Pub Scrawl will see ten local artists spend the night producing work in ten local pubs, and there’ll be guided tours to lead you along this pub-crawl-with-a-difference at a cost of just £5.

Now here’s what else is on offer:

January 21st – The Maccabees – The Leadmill

Little treats to please the ears…

It seems sensible to close this column by mention a few bands that we’re looking forward to hearing more of 2012, and Puzzles fit firmly into this category. Their spectrum-spanning EP, Sleep, from earlier this year had lots to like – glossy riffs, intricate grooves and razor sharp synths. Fun and frivolous, smart and subtle in equal measure. Clever boys. Listen to them on Bandcamp.

Avida Dollars have been “on the scene” for a little while, but last time I saw them they were playing a typically anarchic set of noisy Nirvana covers at the Death By Shoes birthday party – more ‘Territorial Pissings’ and ‘Tourette’s’ than ‘Polly’ and ‘Pennyroyal Tea’. Covers aside, their own stuff is pretty great too, and tracks like ‘100 Jamz’ give slacker college rock a punkish energy, sounding loud and likeable without playing dumb. Listen to them on Soundcloud then spend New Year’s Eve with them at The Harley.

Best Friends bridge a similar divide between pop and punk, with their surf-pop harmonies and carefree drawl. Fans of Surfer Blood, No Age, Wavves and the rest can look forward to a new Best Friends EP which is due in February, or enjoy their old one, plus a brand new demo, over on Bandcamp

We also like the cut of Blessa’s jib. Here’s to more shoegazing alt-pop in 2012!

Will you be my favourite band of 2012? Email me at rob_cooke1@hotmail.com.