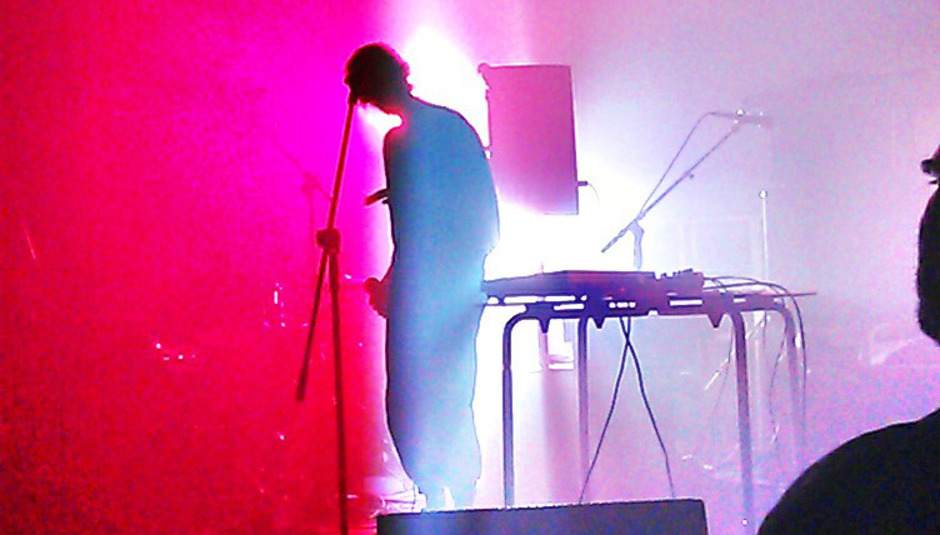 It’s sort of lucky that the weather has taken a grey, autumnal turn over the last couple of days, as the freak heatwave didn’t particularly suit the ambient-heavy, warehouse-dwelling tone of this edition of Drowned in Bristol.

Rather than spend too much time dwelling on things that have already happened, let's jump in with some new releases and upcoming events. But one quick special mention first to Hype Williams (pictured above), whose set at The Arnolfini a couple of weeks ago is possibly my favourite thing I’ve seen this year. For anyone who missed it, it involved the duo playing a set of their dark, sample-heavy tunes in near darkness accompanied by a speedo-clad body builder pulling poses at the front of the stage for the duration, all backed by an incessant strobe-light and such heavy use of a smoke machine that the venue staff weren’t letting people leave the auditorium for fear of setting off fire alarms. It was bizarre and intense. Which is great. Also, as a sidenote, I think that theatre room in The Arnolfini may be one of my favourite places to see gigs in Bristol, and is criminally underused for that purpose. But I’m digressing…

Fairly coincidentally, September 19th saw the simultaneous release of two excellent debut albums of ambient electronic music from Bristol-based artists. The records in question - from Roly Porter and Ekoplekz - have both come out on local labels, explore the less-beat-driven ends of synthesised music and share a certain debt to the early days of electronic sound-design. While they’re fairly niche albums - both being rhythmically unconventional and often atonal - they’re also the sort of records that could be easily overlooked amidst Bristol’s often dancefloor-centric electronic scene. Roly Porter is best known as one half of Vex’d, the industrial dubstep duo whose bass-heavy productions were some of the best things to come out of Bristol’s fledgling dubstep scene around 2004/05. While Vex’d have been inactive for several years now, both Porter and his former cohort Jamie Teasdale (who is currently working under the name Kuedo), have solo records out this autumn.

With Aftertime, Porter has left the dancefloor focused structures of Vex’d behind in favour of atmospheric, often sample-based songwriting that leans more towards the worlds of classical composition and post-rock. Despite the shift in style, however, the album isn’t a million miles away from Porter’s former group; the dark soundscapes and industrial overtones of the album often sound tonally similar to a lot of Vex’d releases, just with the heavy beats stripped away. One of the key elements in the production of the record is Porter’s heavy use of the Ondes Martenot, a type of vintage synthesiser favoured by Radiohead and Yann Tiersen, among others, which gives the whole of Aftertime a warm, vintage tone.

The album is out now on Subtext, one of the Multiverse group of labels. As a side note, although Teasdale has now relocated to Berlin, so falls a little way outside myBristol remit, Severant, his new album as Kuedo, which is forthcoming on Planet Mu, is also excellent. In a similar vein to Aftertime, the full-length debut from Ekoplekz, Intrusive Incidentalz, Vol.1, is characterised by a sound that pays tribute to the early days of electronic music. In fact, last time I caught Ekoplekz live was during a weekend of events at the Cube Cinema dedicated to the pioneering work of the BBC Radiophonic Workshop, so it’s of little surprise that this debut seemingly pays tribute to that 1960’s era of experimental sound design. In particular, there’s a lot reminiscent of the sound experiments Delia Derbyshire (her of Doctor Who themetune fame) in Ekoplekz’s choppy, warped approach to songwriting. Even compared to his previous single releases, the album is a bit of a step leftfield, but the whole thing makes for very compelling - if occasionally inaccessible - listening.

The album is out now via Peverelist’s Punch Drunk label, who describe it in their blurb as a cross between “a bleak retro-futurist fantasy” and an “oblique soundtrack for a broken Britain”. I’m yet to work out what they mean by that. Either way, it’s very nice to see the label supporting unique local talent like this.

In related Ekoplekz news, he’s playing Bristol’s FAG Studios (on Kings Square) on 22 October as Ekoclef - a joint project with formerly Bristol-based producer Bass Clef. Support comes from Pipe Dreams and Some Truths (another alias of Bass Clef). The pair are also releasing a record, entitled Tapeswap on 11 October via Magic + Dreams. Details of the release seem to be fairly limited at the moment. But you can read more and check out a few teaser clips over on the M + D site. Given the pedigree of the two producers involved, it’s very likely to be worth a listen.

Top of the list of incoming events is the start of the season of In:Motion clubnights at Bristol’s warehouse/skatepark/super-club Motion. Now in its second year, the run of events sees the club hosting a fairly massive and varied selection of DJs and live acts every Friday and Saturday night from now until January. Speaking to the team from Motion earlier this week, they promise: “We’ve certainly upped our game, the club has had a re-fit and the programming has stepped up to the next level. New Years Eve will be the spectacle it has been for the past few years - we have some other tricks up our sleeve, and you'll have to come down to see them. Don't miss Halloween and Bonfire night for production value.”

For me, the highlight of the whole run is the Hessle Audio takeover on 15 October, which sees Jamie XX and Jamie Woon headlining a bill that includes Hessle bosses Pearson Sound, Pangaea and Ben UFO (for my money, three of the best DJs out there right now), and a second room of Bristol-centric goodness courtesy of the Idle Hands lot, featuring Peverelist and October among others. Other highlights include a grime-heavy Fwd/Rinse night, and strong line-ups from Bloc, Field Day and Annie Mac. In terms of other Bristol-friendly action, local collective Futureboogie teaming up with Red Bull on 26 November should be fairly excellent, bringing Appleblim and Julio Bashmore to the line-up, among others. As for local names recommended by the In:Motion team themselves: “We’re particularly looking forward to the rise of Eats Everything (playing at Blowpop and It's all gone...) Also local stalwarts done good Mensah and Interface, playing Run.”

Basically, just check out the full listings, as there’s a lot of good stuff on there. I’m told there will be at least 100 tickets on the door for every night when advance tickets are gone. But it’s worth calling ahead and getting there early just to be sure.

There’s quite a lot of good stuff going-on in terms over gigs over the next couple of months, I won’t go into too many here (there’s plenty of listings sites about for that), but there’s a few worthy of special mention. Jens Lekman playing Thekla on 18 October being one of them, for the sheer enjoyment factor of his witty Swedish pop. Reverb-heavy Texan trio Pure X play Thekla on 7 November too, with support from Hippos In Tanks new-girl Sleep-Over, while DiS Editor-favourites The Antlers play the same venue on 9 November. Elsewhere, Qu Junktions have some gigs worth catching as ever, most notably ambient synth maestro Oneohtrix Point Never bringing his new A/V show to the Cube on 22 November with support from local-boy Hyetal. Plus Sublime Frequencies-signed African guitar group Group Inerane and Flower-Corsano Duo at The Croft on 29 November. Elsewhere, it’s worth noting that excellent jazz-infused post-rock types The Drift support Explosions In The Sky when they play the Academy 20 November, while Wiz Khalifa (don’t tell me you don’t love ‘Black & Yellow’) plays the Academy the night before with fast-rising rapper Yelawolf in tow.

That's about it for now, see you in a couple of months for some end-of-year action (I love list season).