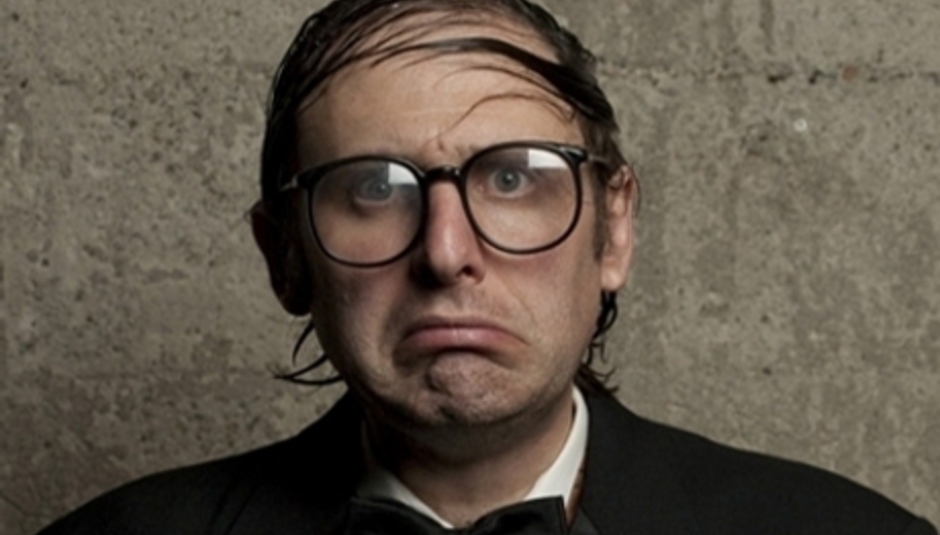 With his show running at London’s Soho Theatre until 10th September, DiS took the chance to meet up with America’s funnyman, Neil Hamburger and play him some records…

Washed Out – You and I

NH: They lost me when that techno beat kicked in. It sounds like some kind of hypnosis. These people are obviously part of some kind of death-related cult. This is the kind of thing they play when you’re trying to relax, in an oxygen tank or some kind of meditation chamber or something, and you’re kind of relaxing, but once that fake drum beat kicks in all you can do is claw on the sides of the chamber to get away from it. There’s nothing wrong with real, wooden instruments. This computerised dance beat… I’m not expert but I don’t think it’s healthy. I think it will give you seizures, even if you don’t have epilepsy

Fucked Up – Queen of Hearts

NH: That just sounds like a bunch of screaming to me. I just worry if you sing like this you’re going to throw out your voice. These kind of guys can’t have a long career – one or two concert tours at the most and then not only can you not sing, but you’re lucky if you can even speak. This is very very harsh, and I would recommend some lemon and honey, and maybe try crooning like Bing Crosby used to do. It’s not that it’s the worst music, but it’s a little frightening to listen to something like this and realise that this could happen to anybody. Maybe this guy did have a sweet voice, but he threw it out, screaming like this, and now this is all he can do?

NH: Oh this bad. This is real bad. Oh this is baaad bad.

NH: Of course it is, because this singing is horrible. Horrible. Is this a recent thing? They have sunk to a new low. Oh boy. You know they record this man’s vocals syllable by syllable? He can’t hold a note! It’s supposed to be a party, but this is not a party anybody wants to attend. This will not be a hit – I hereby predict. Wow. No, these guys are a mess. I pray that they’ve gotten off of the drugs, but it doesn’t sound like it. This is horrible.

NH: Well, he’s got a way with words, I’ll give him that, but there’s no melody, no tune. It sounds like a homeless poet just talking over the sound of the trash compactor at work . Maybe that’s how they recorded it? (Synth comes in) See you hear the squeaking because a lot of the trash compactors, some of the gears aren’t aligned properly. Unless you put oil on it, you’re going to get that squeaky sound. So I’m going to have to assume that this man is stood in front of the trash truck at night - I guess you call it “rubbish” here? I think some of this homeless street poetry… More power to him! Sometimes these homeless poets have more to offer than some of your top-charting acts.

NH: Oh yeah I’ve heard these guys. Again, that’s not a sustainable vocal sound. You can’t make out any of the words – what’s the point? It’s a little frightening and I’d prefer it if you were to turn it off.

NH: Oh boy, here we go. You take a homeless man and you put his voice through a processor and you put it out as a Britney Spears record with her picture on the cover. Poor. Very very poor quality music . It doesn’t sound like a woman singing. It’s a robot. To get the robot to work you have to have somebody to speak the lyrics into a tape recorder. Usually they’ll get homeless guys to do it, to save money, meanwhile Britney’s off somewhere, getting more Electro Shock Therapy. Who woulda thunk you’d take a flute or a recorder, and have a homeless man over it and then suddenly it’s the new release by a tarnished sex symbol? That’s sad. And her fans are not nice people! I got four death threats on twitter last night. When somebody said “Britney could fart into a tape recorder and it’d go to number one” I said “Well that makes you a consumer of farts” and they got very very angry at me and then the death threats started coming in. It’s not a stable group, not to mention her. But nobody really wants to hear this, do they? That stunk. That’s not going anywhere. Mark my words – that’s another flop. You know she’s playing to half empty arenas?

When you’re done with this interview can you throw this computer into a river? Cos this is really quite a bad collection of songs you’re playing me. It really doesn’t give you much hope for the future, does it?

NH: Bonny Burg? It’s just the same goddamned computer programme the last people used isn’t it? And they wonder why nobody wants to buy these CDs anymore! Oh my God! These are the end times! This is a nightmare, isn’t it? There is nothing nice about it. It’s two computer programs gone haywire while somebody has a microphone on a leaking faucet. Not good. (The beat enters) Oh here we go. Everyone involved should be ashamed of themselves. What a mess. That’s a mess. You can’t dance to it, you don’t want to listen to it , you can’t go to sleep to it because you get so angry listening to it !

NH: (Jay Z’s vocal enters) Oh shut up! Turn it off! I don’t understand this impulse. If there’s a record you like, you just listen to it, you enjoy it. You feel the need to talk and shit all over it and then release it again? When did this start? You just take the record and play it all the way through while you and your asshole friends talk over it and that’s a hit single? This is just a bunch of wiseacres just blithering over somebody’s artwork . Are the museums here full now of , you know, the Mona Lisa, but somebody’s Scotch Taped a bowel movement onto it and that’s a new piece of art? Because that’s what these guys are doing, and that’s a disgrace. And you know if they had the talent of an Otis Redding or even of a Rudi Vallee, they would just make their own song , and they’d sing, but they have no talent, so they’re just shitting. It's just a straight shot from the ass onto somebody else’s record and then they put their name on it and collect money. That’s probably a big hit, wasn’t it? Don’t you think that’s a crime? The people who like it, their minds are so shot from drinking and drugs and god knows what else they’ve never heard these original songs, so they’re like “well I like the thing in the background“ so they’ll tolerate this prick blithering over it, but if they had any imagination they’d go down to the local Salvation Army and buy the original record for 25 cents .

NH: Well that was bad. If that’s somebody’s iPod, I hope that they’re not getting too close to a bridge, or a bottomless pit, because listening to a steady diet of those sort of songs is going to drive someone to end their life. That’s no way to live, with that type of music.

DiS: Why do you so often play with alternative music acts when you don’t seem to like them much?

NH: Well you know, if you get asked to do a show, you’re going to do the show. You get people who work in sushi restaurants who, on their break, go and eat Macdonalds. I don’t recommend that.

DiS: What would you recommend that people who do listen to this stuff should listen to?

NH: I do like Bow Wow Wow quite a bit. They have a lot of good songs. It’s good singing and good lyrics and good playing all around. This is British music. You need to support that, and stop playing some of these dirtbags you’re playing from god-knows-where. Frank Sinatra is another very, very good singer. But that was demoralising huh? Is this what you do, go in a ruin people’s nights like this? When I ruin people’s nights it’s them at fault. I’m putting on a great show. Well I wouldn’t say “great”, but an adequate show. They should rise to the occasion. If they’ve paid money to come out and laugh, we’ve given them everything they need in order to laugh. In this case, these people have dropped the ball, cos if you pay to hear music, you want to hear something that isn’t just tapping the "J" key on a laptop computer and playing an old record while some guy and his buddies are talking in the other room.

These guys have their pants down around their ankles when they’re recording a lot of these songs – that’s the truth. I don’t know if the fluid’s coming out the front or the back, but that’s what’s going on in the recording studio. Trust me, I’ve met many recording engineers and producers who have the inside stories on these records, and they’re not fit for publication, I can promise you that. That’s how you get your website taken away from you, writing about what goes on at one of these sessions.

Neil Hamburger is at the Soho Theatre in London until 10th September.

Visit the Soho Theatre website for tickets for the show.