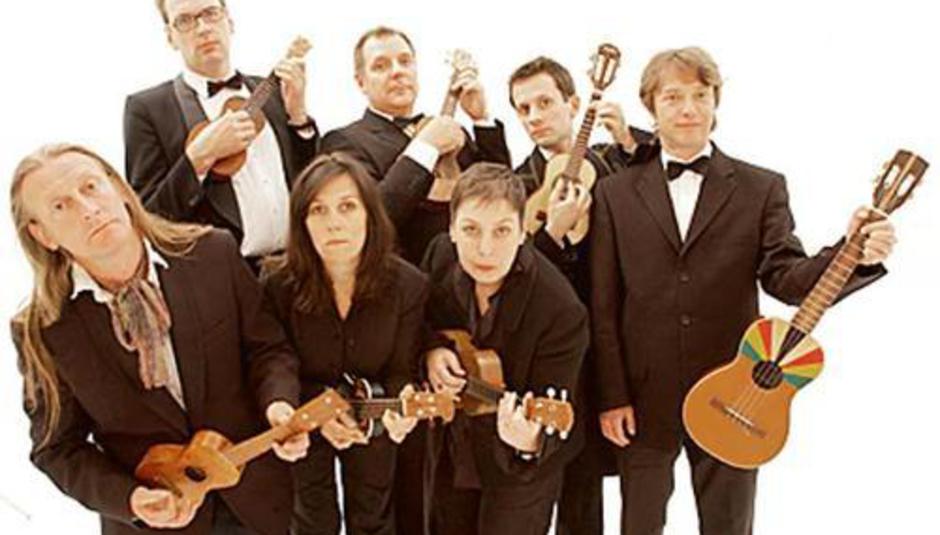 If you really like an instrument, why have just one of them in the band? Why not 15 or 20? Groups consisting of only one kind of instrument might seem a bit obsessive, but they are also strangely satisfying and can produce wonderful sounds as the Boredoms and Glenn Branca have shown. Here’s a selection of my current top mono-instrument groups.

I like Europe’s ‘The Final Countdown’ a lot, especially for the catchy keyboard riff and their enormous hair. If you have ever lain awake at night wondering what it would sound like played by twenty teenagers with accordions, here’s your answer. Amazingly, it improves on the original. This is the Jimmy Blair Accordion orchestra from Renfrew in Scotland.

Saxophones have been much maligned in indie music circles, although recently they seem to be undergoing something of a resurgence. I’ve always had a soft spot for them. The bass sax quartet Deep Schrott have an interesting sound and an even better name. “The soundtrack to a fat man sliding across a sheet of ice,” as one comment says.

This is a fantastic film clip from 1928 - The Ingenues. It’s eighteen women playing banjos and looking like they’re having a ball.

In Korea they take the harmonica very seriously, and rightly so. Here’s a beautiful and fairgroundy tune from the Korean Harmonica Association.

Someone made a xylophone out of books. OK, it doesn’t exactly fit the theme, but it sounds great!

This clip’s a bit dark, but peer through the gloom and you will see the Musical Saw Orchestra of Portland playing a rendition of Amazing Grace. Oddly plaintive, or grating, depending on your tolerance for musical saws.

I learned piano by the Suzuki method, but the Munster method looks like more fun:

The Hull Ukelele Group played all over the place in 2010 and I’m sorry I missed them. Here they are nailing a classic:

Finally, the Stylophone Orchestra of Great Britain playing Toccata in D Minor. Bach as he was meant to be heard.