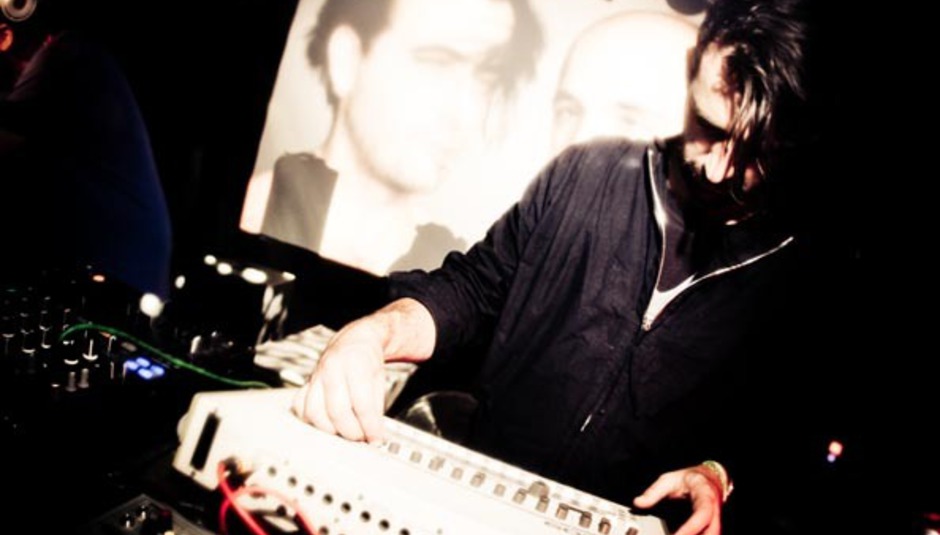 Butlins Minehead has a slightly jarring atmosphere in the middle of the night. Sprawling chalet lots and the cocked arms of fairground apparatus have an unnerving tendency to suddenly loom from the darkness without warning. While ATP’s beardy warmth adds a softer edge to that experience, its intensity is further heightened at BLOC Weekend; it’d be pretty difficult not to notice the massive dissonances generated by placing a line-up that’s almost exclusively forward looking/future thinking alongside the decaying signifiers of the Great British Seaside Holiday. That contradiction adds a lot to its charm (well, that, and the fact that the crowd all have real beds to look forward to after several nights of serious overindulgence), but occasionally results in moments of severe culture shock. It’s most potent during the early hours of Saturday morning, wandering seamlessly from the almost-industrial techno intensity of Ancient Methods and Silent Servant into what essentially qualifies as a glorified shopping centre.

Still, there are few other UK festivals that manage to bring together such a comprehensive selection of electronic sounds in such a short space of time. That this year’s edition sold out so swiftly is partially testament to the crowd pleasing strength of Friday and Saturday’s headliners - Four Tet, Aphex Twin, Magnetic Man, LFO - but also to a slight rewiring in attitudes towards electronic music in the last year or so, buoyed by dubstep’s rise to mainstream status (in name, if not entirely in attitude and sonic variety). Certainly, the line-up itself speaks volumes: the annual Subloaded stage is packed throughout its Friday night tenure, with an early set from Bristol’s Guido providing an R’n’B-soaked adrenaline hit to start the weekend, and Mala’s set treading his usual fine line between gorgeous, meditative sounds and grating midrange wobble. An unusually frontloaded weekend results in a manic and slightly frustrating first evening – the Modeselektion stage, featuring Ramadanman, Ben Klock, Ikonika and Modeselektor themselves, clashes in full with Subloaded. DiS heads for the latter, where Joy Orbison’s shift into Detroit-influenced house territory proves one of the night’s hazy highlights.

Later on the same stage, Shackleton’s densely meshed percussion and bass create an effect on the crowd that’s akin to total group electrocution, sending some of the weekend's more spaced out punters pirouetting across the front few rows. In the wake of the release of his fabric55 mix, and with his recent Honest Jon’s releases housing some of his finest and most unique material yet, his sound continues to approach a purity of form and function, where music’s aesthetic content and physical effect become completely inseparable entities. In Shackleton’s hands dancefloor functionality is a form of expression; the drifting vocal motif of ‘Deadman’ (“everyone starts from point one”) rolls off an elastic conga line so viscous it appears to visually trace sine wave patterns in the air. Sunday’s live set from Bristol’s Al Tourettes (a closely linked contemporary thanks to his ongoing collaborative relationship with Appleblim) approaches the same singularity, though with a robotic technoid sheen far removed from Shack’s organic jams. It’s one of the weekend’s most engaging sets; despite its cool chrome sheen, in the mix his percussion takes on an eerily biological nature, clicking like giant insect mandibles.

The current trend for electro-influenced drum machine sounds in UK bass, largely spearheaded by Swamp81’s firey output, is well represented this year. Pinch, Pearson Sound, Addison Groove and Loefah have all been incorporating these elements into their sets recently, and Loefah’s Friday appearance is one of the weekend’s best, marking the first of several appearances of ‘Footcrab’ (still an anthem a year on) alongside its much-hyped descendent ‘Sicko Cell’. In between are a pair of pulsing Pearson Sound refixes - 'Deep Inside', which has been doing the rounds for a while now, is house simmered until reduced to its basest essentials, and has an appropriately chemical effect on the dancefloor. Addison Groove’s live set the following day is painfully early for such intense, energetic music, but draws a sizeable crowd regardless. Stacking layer upon layer of tuned 808 hits and sliced vocal samples, his music retains the anxious, cyclical nature of Chicago footwork but adds a driving sense of momentum largely absent in its original incarnation - 'It's Got Me' in particular builds in fits and starts, its careful balance of delicacy and physical heft recalling Drexciya as much as DJs Rashad or Spinn.

Later on in the weekend, house and techno take precedence, allowing a little respite from bass music’s endless build/drop dynamic. Sets from Floating Points and Will Saul on Saturday night are perfectly poised between melody and muscle, grit and shine. Sunday’s appearance from Detroit house wunderkind Kyle Hall is a late contender for the weekend’s highlight, his own angular techno productions blurring into a pitched-up whirlwind of a set, and the surprise appearance of Robin S’ perennial club classic ‘Show Me Love’ prompts the requisite mass singalong. As an appropriate closing set for the weekend (Laurent Garnier’s finale later in the evening is overly bombastic), it draws attention to the one criticism that could be leveled at this year’s BLOC. Last year’s edition was brought to life by a series of individual standout moments – in 2011, the weekend blurs into a single consistent whole, with fewer truly memorable sets. Still, as a festival experience it manages to blur the line between musicality and sheer escapism with impressive skill, considering the well and truly 'lost' feeling that settles in come Monday morning.