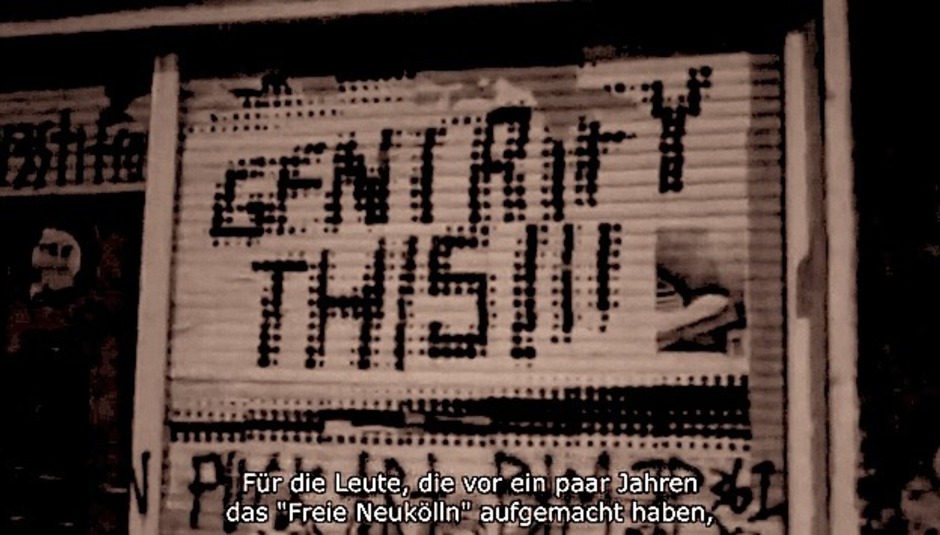 Bar-owner Barry Burns of Mogwai shares a "nice and xenophobic" video regarding gentrification in Berlin created by a local landlord. We'll let him explain...

At the end of last year my wife and I, together with Phil Collins (the video artist, not the utterly amazing songwriter) and his partner Sinisa opened a wee bar in Berlin's poor but exciting Neukölln district. We took it over from what was already an old man's corner pub (Berliner Kneipe) and tried to save it from the awful management and decay that it had suffered from its last owners. We didn't want to change it too much other than spend many, many weeks cleaning its filthy innards and buying some new things to get the beer up to the usual high German standard. We left intact the crazy floor-to-ceiling tree with taxidermy birds balancing on the branches and the original handmade bar and the old glass bricks. We tried not to make it look modern so that it would attract the same old customers and new students. A bit like the bar called "The Doublet" in Glasgow if you've ever seen that.

While we were renovating it we saw a video online from the owner of a nearby bar who complained that the area was becoming gentrified but not just any video. It's called "Offending The Clientele" and you have to see it. It's (somewhat weirdly) in English but spoken like the main bad German guy from "Indiana Jones and the Raiders of The Lost Ark". What he's basically doing is being amazingly prejudiced against local students and other people that have had to move to Neukölln to avoid the increasing high rents of other areas in Berlin... the very customers he needs to keep afloat himself. I also heard that he's not even from the area himself and has only lived there for two years which makes this video all the more odd.

Anyway, apropos of nothing Mogwai at all, watch this nice and xenophobic video and don't think for a minute that even though the tone is comical that the intent is not nasty. As Phil is a video artist we thought it might be funny to do a parody of it, maybe we will if we ever have the time...

Freies Neukölln, Weserstr, Berlin-Neukölln. Gentrification in Berlin's former problem borough. The Creative Class marches in and the founders of the first szene-pub in this corner feel unwell, guilty and overrun. That's why this speech on their own account is necessary, long overdue and probably still too friendly.

Mogwai week: Five Myths About Being I...