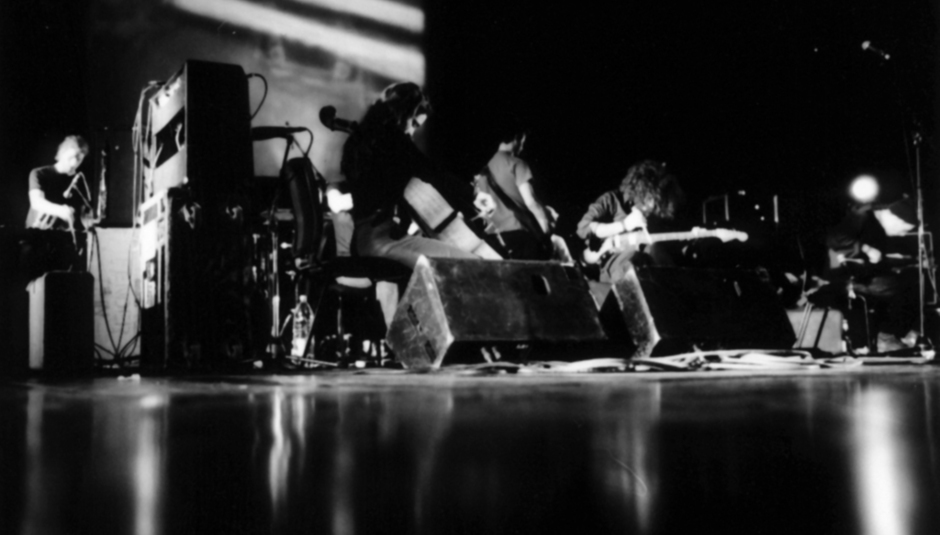 Those with long memories for such things may recall the three part transcript of a lengthy email interview your humble correspondent conducted with Constellation Records founders Ian Ilavsky and Don Wilkie, published in full on this site after portions were used in an article for the late, great Plan B magazine. One extra thing I was sitting on was the somewhat mind-boggling stream of consciousness reply to my questions that I got from Efrim Menuck, leader of A Silver Mt Zion and Godspeed You! Black Emperor, and engineer in residence at Thee Mighty Hotel2Tango, where the bulk of CST artists record. For fairly obvious reasons, only short excerpts were actually published in the feature; but in advance of GYBE!'s return at ATP at the weekend, now seems like a good time to share Efrim's thoughts on the band's founding, because they're really too good to moulder away in an inbox for all eternity.

EM: "I met Don and Ian in 1995 I think, me and Dave (god's pee gtr.) sat down with them on the patio of a very hallowed, very shitty Croatian bar called 'Miami'; it was summer, a truly lovely day, and we'd hooked up with them 'cause we'd heard through mutual friends that they were interested in starting a performance space - Dave and me and god's pee were on the hunt for a new space to have shows, 'cause Mauro (god's pee bass/local brasserie tycoon) had just moved out of his polluted loft, which meant that we didn't have anywhere to play anymore (this was about three months before I took over Mauro's lease and we re-christened the place hotel2tango(2juliet2)); so, we sat down with them to see if we could join forces somehow, 'cause neither Dave nor I nor godspeed had any money, (we were all broke, really broke, all the time, since forever,) and Don and Ian seemed to have resources somehow, so, we 'took a meeting' with them and shot the shit a little, but nothing came out of it. I think that they (rightfully) pegged me and dave as a pair of flat-broke, hard-luck, aggressive/depressive daydreamers, and me and Dave just kinda toodled away from the meeting and went back to the impossible task at hand (finding a 2000 sq. ft. loft that we could afford to rent and live in).

A couple of months later and godspeed had broken up again (we broke up a lot back then), and I had moved into the hotel2tango with Tinholt (Ontario Dutch farmboy sweetheart carpenter/artist- it's him who drew the train in the f#a# vinyl, and it's him who came up with the name 'hotel2tango'), and his psychotic, passive-aggressive paleface sufi 'furniture maker' friend, (this was a very low time for me). I was busting ass, hauling american students' furniture around just to make the rent on this enormous toxic loft (we had these plug-in carbon monoxide detectors that'd go off all day, at first we'd unplug them and go for walks whenever they started shrieking, gradually though we just left them unplugged and had strange, profoundly deep dreams).

Nothing was happening then, no shows - no band, and out of the blue i got a phonecall from Don and Ian inquiring as to whether they could rent the loft to put on a dub narcotic soundsystem show. Dave had impounded godspeed's public-adress system, so we rented a bunch of mics and a soundsystem, did this sparsely-attended show, and over beers and mutual complaints at the end of the night me and Don and Ian became friends somehow.

A couple of months later, and godspeed was up and running again, hatching new impossible plans; we had stripped down from a 14-piece band to a nine-piece, and we were lugging this 90-minute chunk of music around (90 long minutes, no pauses, no room for catcalls or applause), and we decided we were going to record this thing at thee hotel2tango, and that we'd put it out ourselves as a quadruple 7-inch.

This was late winter, and the landlords had turned the heat off, and we rented a bunch of microphones and a recording console and a 16-track reel-to-reel, lugged all this shit upstairs and set about trying to move all this cold air around like we knew what were doing (which we most certainly did not). Don and Ian rode the faders from this jury-rigged control room we'd set up in my bedroom at the back of the loft, and we ran through the tunes live as best as we could. We spent one long day recording, slept a few hours, overdubbed the violin and cello acoustically the next afternoon, mixed the thing until eight in the morning and then drove all over town dropping all the rented gear off. Somewhere in the middle of all that, Constellation told us that they wanted to put it out. We called it f#a#infinity 'cause that was the open-tuning of the guitars (tuning the guitars like that sounded like faraway trains to us...). Our only aspiration was to have a vinyl-record that we could sell to people on the road, like a religious pamphlet or a self-help cassette- making the record was just a pretense to tour, a pretense to find other people like us...

Articulated politics didn't really play any part of it, (and I've never really understood what the fuck music-writer types precisely mean when they throw that word around like so much fine danish furniture), at the time my 'politics' were just a product of having had a very heavy adolescence/young adulthood; I had nowhere to live for many, many years, crashing on people's couches or sleeping in parks, and thieving my way thru the day's supply of cigarettes and drugs. I had bad experiences with police, banks and landlords, I had bad experiences with the juvenile social-assistance program- I did way too many drugs, and learned a lot of things, and I got by, but am still even now trying to process some of what I saw back then. At the time, I was mostly just happy to have left most of that heavy shittiness behind, but still felt those bad times breathing down my neck like a foregone inevitability. And so, in those early godspeed/constellation years, when montreal seemed to have an anarchist riot every few months, I knew which side I was on, and most of godspeed (having had similar coming-of-age horrorshows) did too.

A few other things godspeed knew = contemporary music circa 1995 was fucking appalling, we felt a minor kinship with a tiny handful of international bands, but for the most part we only got jazzed about stuff that was happening in Montreal (Exhaust, Fly Pan Am, Bliss, The Shalabi Effect) and (occasionally) Toronto (Smallmouth, Lifelikeweeds, The Dinner Is Ruined). We distrusted any prefix (save punk) that attached itself to the word rock, in the short-term we wanted to live like Black Flag, in the long-term we wanted to be The Ex (punk rockers with homes and families).

We felt an attachment to the neighbourhood we lived in 'cause it made the most incredible noises at night (distant trains approaching slowly, deafening as they passed, and then slowly departing again, leaving a whole mess of unidentifiable thrums, drones and rumblings in their wake). We obsessed over the unspeakable beauty of those empty trainyards, as well as the snow-buried expansive Montreal alleyways that we found ourselves wandering through late at night, and tried to make a noise out of tapeloops and two-finger chords, bowstrokes and duelling press-rolls that approximated the dumb luminous weight that we were lugging around in our heads.

Operationally, we thought that most other bands (even bands we loved) were too quick to abandon the mothering embrace of their indigenous root-soil, like why daydream about chasing shiny stars, (why chase shiny stars at all?), why not stay rooted, and if you got lucky, why not drag your friends up with you and bury some coins back into the fragile scene that birthed you? We liked where we lived and wanted to stay there forever, and we knew that what we were trying to cobble together then was a hopeful thing, a vision divine in spite of, proud and true, and we were convinced that mostly everyone else in the world was a blind fucking careerist buffoon.

I do not know how much constellation, in those early years, shared our worldview. I do know that (in hindsight) there was a crucial existential gap between us at the time = they were living, albeit modestly, in a clean, bright, well-equipped downtown loft, tag-teaming their workloads and living productive lives, while most of the rest of us were sucking back cancer-fumes at thee olde hotel2tango and engaged in the type of internal squabbling that desperate living paired with emotional dysfunction engenders. It was only later, once we were completely entangled in this pigpen of a recording industry that we started banging out commonalities and figuring out what exactly was this stubborn thing that we all believed in together.

The hotel2tango was where a bunch of us lived, and where a bunch of us rehearsed, and for three short years we had shows there. It was cheap to rent 'cause it was above a car mechanic, and it was huge. The back stairs dumped out onto three rail-lines, and beyond that was abandoned overgrowth. we started having shows there because there was nowhere good in town to play then, just cruddy showbars, and a lazy tyranny of big-money local promoters who only gave a fuck about whatever up and coming pretty ponies the free local 'culture' magazines were trumpeting at the time. Because the hotel2tango was an illegal space, those early shows were only advertised via xeroxed flyers and word-of-mouth, and were almost always packed, orphans playing to orphans joyously. The shows were almost always good, but no single show sticks out in particular (they all just kind of blur into one hot mess)- we didn't sell booze, so people would bring their own, and in the middle of all that bright noise some crucial light would flicker a bit, hinting at something bigger. The bad shows were generally the ones that we didn't book ourselves, strange cocaine dance parties or revivalist swing jamborees that seemed to confirm our conviction that true nihilism lived in a place where perfumed money trumped reason, and that our own racket (in comparison) was a naively earnest, shy and hopeful thing."

Godspeed You Black Emperor! play the following dates in December:

...and then on to Europe, Japan, the US and Canada.