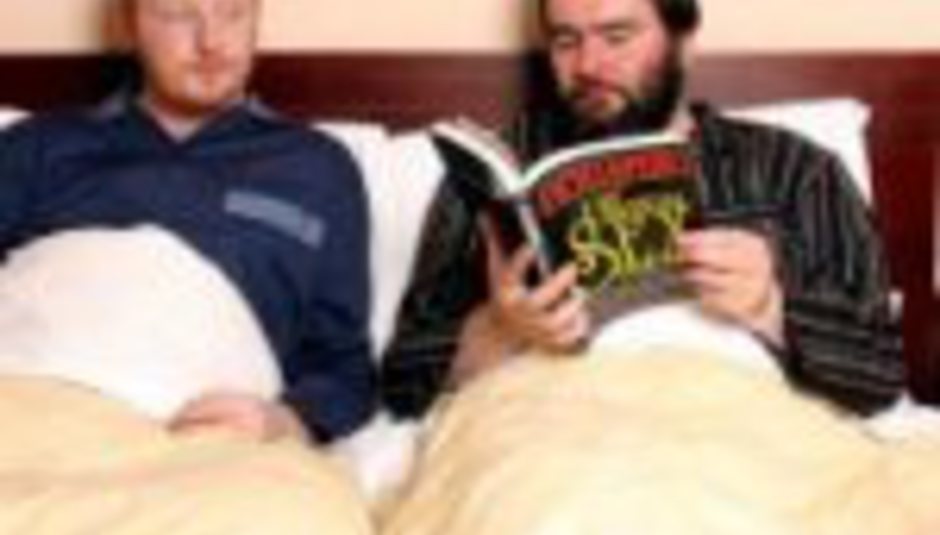 SIGN OF THE TIMES.
"JOHN PEEL!" sqawks someone at the back.
"Ah, wut about him?" murmurs Aidan Moffat.
"He made you number one?"
"No it was Kenickie, we were number two but he said he thought we should be number one and tha's enough for me. Anyway, This is a song we only ever recorded for a Peel session. It's really fast and requires a lot of energy so if I pass away halfway through..."
Malcolm pauses and drops the sentiment of the night: "Remember me fondly."

I'm shattered from three days of seeing the sunrise as I stumble out of a taxi, saying "thank you" through red wine-stained lips. My neck aches - it's probably related to me being awoken from a brief yet deep sleep by road works at 7am after I'd fallen asleep on the sofa this morning, fully clothed, again. I'm suffering a hangover so intense I couldn't stomach my dinner and I can feel the beer sweats evaporate as they pour down my back. The last thing I need is this third pint of Guinness in my hand and to be doing anything other than putting pillow creases in my cheeks.

Instead I scrape my tongue around my back teeth to loosen the last few crystallised pools of last night's whiskey. Tonight is a sad occasion; it's the demise of a band who changed my life, Arab Strap, and their last-ever London gig. This isn't something I'm going to miss. Tonight isn't any gig and the self-raped'n'pillaged way I feel is extraordinarily perfect. Looking and sniffing around the room, it would seem I'm not the only one treating this as a wake.

As I force my way past the tall people at the back and seep deeper into the crammed crowd I spill someone else's beer up my sleeve. I finally give in and stop in the perfect clearing: the guy in front of me is rocking backwards and forwards like a nodding oil pump and the girl to my left has her eyes lightly closed, mouthing the words like some forgetful hippie child. The lights touch their faces like camp fires on Grecian beaches; they probably look like red throbbing blurs behind their eye lids. Then the band begins.

I could try to take this apart and list all the songs they played and which b-sides they threw in, but tonight I'm immersed and lost. Lost in the mumbled stories about girls called Morag - "she's here tonight!" - and half-empty philosophies that slouch atop beats that're like bashing your head repeatedly on kitchen cupboards and door frames and the only thing you clearly remember in the morning is stubbing your toe on the bed post, and the curse-ive drunken tongues that followed. Awake, breathing in the smell of three days of sweat and spew, it's only then you look in the mirror and realise you're wearing stolen sunglasses but the glasses are scratched. Your washed out crumb-covered clothes have to be peeled slowly from sunburn-vs-tan lines.

Arab Strap have always been the perfect comedown band and made music for kids who like dance music but don't wanna dance. They put humanity and a Bukowski personality to the notion of vacuum packed post-rock. They just aren't another band. Arab Strap changed my life, but not so much because of some radical musical awakening about time changes but by exposing me to a whole culture and heritage that had a strange osmosis process that changed my body chemistry. It was a world of fanzines and fuck-ups with filthy tongues. A netherworld of music that has dirt without leathery riffs. They took, consciously or more likely not, the idea of hip-hop beats, beat poetry monologues and art-rock then morphed it in the back room of a Falkirk working mens club. It gave birth to both release and escape for them and us to indulge in, whilst also creating something truly unique.

This is pain and it ain't for the beautiful people. It's pained like looking at your beer gut in the mirror and the image still resonating as you try to gnaw the steak from the fat, guiltily knowing something died for every tiny calorific chunk of meat you savour. Knowing some of this animal's emotion and pain could be transferring into you, whilst satisfying yourself - you've never loved anyone enough to lose those extra two stone and that if the asshole always gets the girl, why bother anyway. It's being ignorant to a world with fluffy rainbow edges and giving up on yourself for the greater good.

For all of these tales, more concerned with the half-memory of the shiny snail trails of an ex's kiss - rather than the kiss itself - there is, it seems, a logic in calling time. Surely the only way to grow up and move on and forget these thoughts and stop going through the torment of lost loves night after night and therefore never being able to close that chapter of your life (real or imagined) is to stop. It is the humane thing to do. The trouble is it's calling time on songs which not only touched but changed people's days and lives. These are men who can barely remember which time was the first time and whether the first real time was when things went anal or just when you were sober enough to keep it up for a second, sloppier attempt.

Whilst my mind wanders down piss-stained alleys of "why... wuh-yyy are you splitting up!!", the man in front of me struggles to battle gravity under the weight of booze. He steps on my foot and rests on his friend's shoulder to remain vaguely vertical. He's having the night of his life, with an echoey morning to follow where he'll wake up with a smile on his face and cherish the warm glowing sensation of a night he can barely remember. People say drunks are dangerous but this kinda tranquilized drinking is romantic, nostalgic for a time of candlelit men-only bars in cut-off one-horse towns where news travelled slow, if at all. It was a mistier, groggier, simpler time, back before men became women and poetic people like Aidan were the acceptable drunken soul of the town whom everyone would gather around waiting for that nugget of clarity and logic the church couldn't teach.

"The jukebox is empty tonight my friend," says Aidan as an onslaught of requests fails to falter.

As the set unfolds it's like getting to three pages from the end of a book, knowing the end is approaching. Every book has its end, and for the encore they do play 'Packs Of Three', the song someone first sent me over MSN seven years ago that started this, er, problem. It's a song about STDs from "teh bes' seh-x a've evah 'ad", from a girl who had sex four times, but johnnies only come in packs of three. And it was acoustic. And it buckled my heart and those hearts of the grown men all around me, with beards, each trying not to cry. Then comes the donkey punch, the elephant dumped on top of the Jenga arrives: it's the sound of 'Cherubs' played on acoustic guitar, sounding like it should have been the centrepiece to Trainspotting and turned them into the biggest band in the world.

Walking home in the drizzle past King's Cross scum and debris whilst trying to say "ser-ah-tone-in" like a Scotsman, it sinks it that that is it. It's over. The end feels like not just the end of a band but the end of a world built by John Peel, when a late-night play on Radio 1 was a respected local badge of honour and meant touching an industry and an audience bigger than those on a stadium tour. The world seems smashed up like a disco ball, the sign of the times; a globalised yet fractured planet, which has lost itself in a flood of blogs, streams and 404s. It's a world that belongs to a generation who still remember the embarrassment of your mum answering the family phone to your holiday romance, a one-night stand you thought would never call, who has tracked you down after weeks because she's pregnant and true to her religion (rather than just finding you on MySpace). It's a generation built on the difficulty of dealing with being trapped in a small town cocoon with ambition or a taste not shared by anyone else and feeling so desperately detached and alone until a record touches you.

It's knowing that this world isn't something you can regain and is slowly disappearing, like a dream fading, like an Etch A Sketch, until the last grey grain looks like the crescent of a half-full full stop.