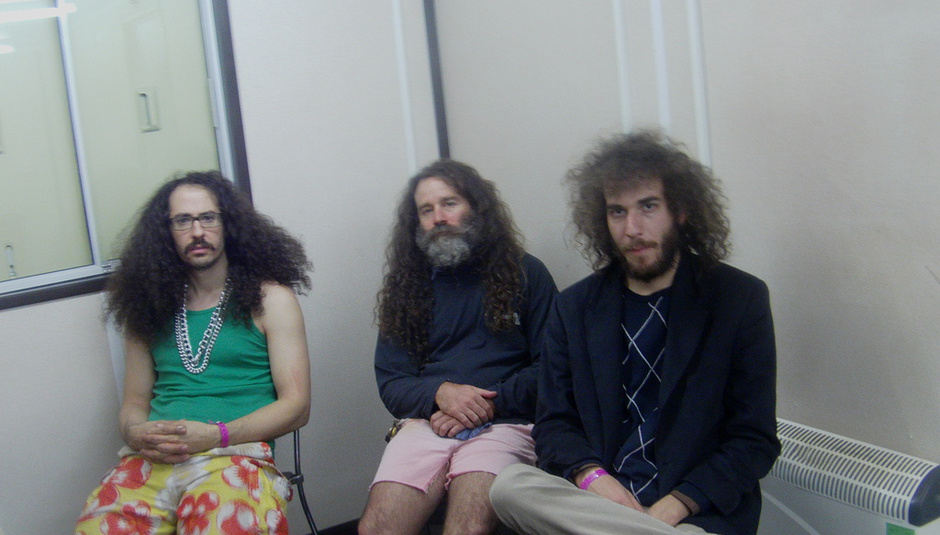 If Monotonix were to ever give up this whole music making malarkey, their tombstone would simply be inscribed with "once seen, never forgotten". While many bands complain about the sound quality or lack of space on stage, Monotonix simply create their own, amid a hotbed of ensuing chaos and destruction.

Formed and still based in Tel Aviv at the back end of 2005, the Israeli three-piece are something of a live phenomenon both at home and abroad, not least due to their incendiary live sets often causing promoters to have coronary attacks thanks to events such as this. The trio - Ami Shalev (vocals), Yonatan Gat (guitar) and Hannai Ferschtman (drums), having put out an explosive EP on Chicago based independent Drag City released their first long player Where Were You When It Happened to glowing reviews such as this.

Next year they'll finally release the long-awaited follow-up Not Yet, recorded with the legendary Steve Albini. Having encountered their memorable live shows on numerous occasions this past couple of years, DiS thought it best to sit down with the trio in the safe confines of their dressing room, where we discovered among other things that English girls aren't as pretty as their Israeli counterparts...

What's the rest of the Israeli music scene like?
Hannai: It's mostly traditional stuff really. There's a lot of ethnic music but very little rock. We do have a bit of a scene in Tel Aviv, although most of the music you tend to find in clubs there is jazz orientated.
Ami: We seem to be inundated with dance music as well...too much!

In terms of your live show, it would be fair to say that it's quite spectacular compared to many of your peers. Is it planned or do you just aim to be as spontaneous as possible?
Ami: We partly know what we're doing, but at the same time a lot of what happens depends on the audience reaction. I guess you could say I'm leading the show, and Yonatan and Hannai need to keep one eye on playing their instruments and the other on what I'm doing, but it seems to work. A lot of the show is purely improvised but at the same time we do put together a structure in terms of which songs we're going to play. It's just how they end up that isn't so obvious!

Does it worry you that your reputation as an unmissable live band may take precedence over your recorded output?
Ami: I don't know really. When we record, we try to play the songs as if we were doing a live show, and even live the songs aren't that much different if we take away the improvisation we put into our performance.

Who would you say has been a major influence on Monotonix musically?
Ami: Paul Weller, obviously!

I remember you ranting about Paul Weller at Offset earlier this year. What is it that irritates you so much about him?
Ami: It seems to be a British thing, certainly with your media, that you need to be an associate or friend of Paul Weller in this country to stand any chance of achieving success.

Your new record Not Yet is out in the early part of 2011. Are there any expectations from your label bearing in mind you're arguably one of the most revered live bands on the circuit at the minute?
Ami: They've actually delayed the release date....it was meant to be coming out at the back end of this summer but is now in the shops on 25th January I believe. I guess they felt with all the touring and festival schedules we had it would be difficult to promote the album...
Yonatan:...which is quite odd as there will be a tour to promote the album anyway!

With some UK dates I take it?
Ami: Definitely!

How do UK audiences compare with everywhere else you've played?
Yonatan: We love English audiences very much!
Ami: I think there's something about the English people where they appreciate being entertained, and that is one thing we aim to do with every show we play.

You had a few problems at All Tomorrow's Parties earlier this summer.
Ami: Yeah, I couldn't quite understand that. The promoters must have known what kind of band we were before they booked us, yet they then decide to go and pull the plug on the show four songs into the set. I guess they have to be really conscious of health and safety regulations but it's not as if we're going to change our show either.

One thing that's always amazed me after watching a Monotonix live show, particularly at a festival, is how any band watching from the side of the stage can prepare themselves to follow something like that.
Hannai: Music should never be about a competition. It shouldn't matter whether a band moves around on stage or stands still throughout their set as long as they're making good music.
Ami: The only thing I'd say about us compared with other bands is that despite the occasionally shambolic nature of our shows, the music is 85% tight. I mean, there's always going to be the odd bum note here and there but I'd like to invite any other band on this planet to play in the same situation we do and sound as good.

Have you ever had the inclination to just stand on stage and play?
Yonatan: Yeah, we have done that, many times when we were first starting out.
Ami: It probably wouldn't feel right now though.
Yonatan: I guess people who come to our shows expect the performance element nowadays, especially over here in England.

Ami, I hear you got injured at the start of this year. Does it not worry you that you're all risking serious injuries through your live performances?
Ami: I don't know, it comes with the territory I guess.
Hannai: We have really good insurance policies!

Finally, what would you be doing if you weren't making music as Monotonix?
Ami: I dunno, probably something clerical working with nice girls! As long as they're Israeli girls and not English ones...English girls are too loud and tend to get drunk, whereas Israeli ones are much more cultured.
Hannai: I'd have been a businessman, with a very secure business!