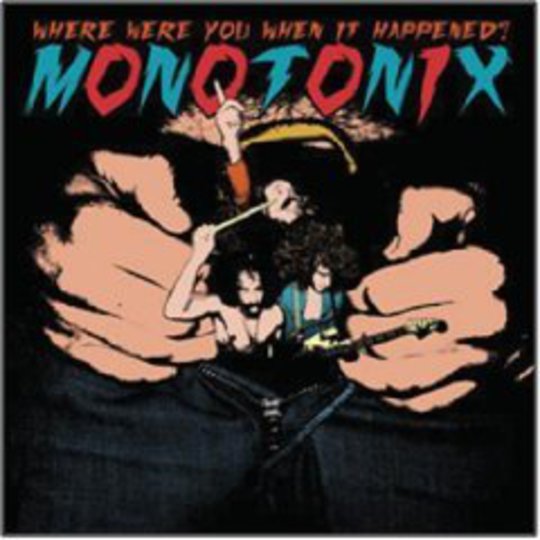 Coming from Tel Aviv will more often than not prove to be a hindrance, perhaps a fatal one, if a band might hope to get some recognition in the West. Bearing this in mind, Israeli sweat-rock threesome Monotonix appear to have spent at least some of the last three years stumbling into dumb luck. The first person of any public import to talk them up was David Berman, who invited them to tour Europe with his band the Silver Jews after they supported the band on their brief tour of Israel in 2006. It’s hard to say whether people specifically listened to him on this issue, as he’s not generally considered an oracle on contemporary wildman rock, but they certainly have grown in stature over the last 18 months.

Their debut release, mini-album Body Language, was warmly received; at eight songs and 30 minutes, Where Were You When It Happened? still finds the band prizing brevity, although they can jam individual songs out to a hairy length. The cover is a drawing of the trio emerging from the tugged-open zipper of a pair of jeans, in what one imagines to be equal homage to the Stones’ rock milestone Sticky Fingers and the internet’s extreme pervert milestone Goatse Man. After a forgettable opener, ‘Flesh & Blood’, ‘I Can’t Take It Anymore’ exhorts the listener to “scream and shout”, just discernible through a muffle-mouthed delivery and a sonic foundation of the most willfully primitivist thud-thuggery.

Truly, Monotonix leave few stones unturned in their attempts to drag themselves along the dirt road with their fists of ham. Readers with an especially keen interest in ‘outsider music’ might have come across a band from Texas called Complete in the last couple of years; their mindrazingly stupid lyrics and inability to play their possibly ZZ Top-influenced songs in time with each other, coupled with the fact they look like middle-aged meth enthusiasts, has led to earnest debate about whether they are playing with a straight bat. Monotonix, at times, sound somewhat like Complete. ‘My Needs’ has a great biker-bar central riff, sounding like something The Obsessed wouldn’t have chucked out; ‘Set Me Free’, analogously, runs at a beery, backroom clip that takes the same disrespectful approach to rhythm’n’blues as British proto-punx like Dr Feelgood and The Count Bishops.

‘Hunt You Down’ is sedate by their standards, built on lamenting lyrics and guitars that drone-like organs – while still no intellectual exercise, it does follow a path akin to Royal Trux (during their non-boogie, non-free noise periods). Kinda funny, insofar as their live persona is pretty much the exact opposite of Royal Trux. Which brings me to the bit that, if you’re remotely familiar with Monotonix, you’ll have been waiting to be brought up. It would be a jape to overlook the fact that, realistically, their albums play about ninth fiddle to the eight splintered, piss-drenched violins that represent their shows, but one can only keep it up for so long.

Something you fear might also apply to the band at hand. Their homeland rep was allegedly such that they had to achieve some kind of overseas breakout, as no Israeli venue would have them any more; now, they’ve accrued enough popularity that they can break, climb over and soak other people’s property and club owners will smile sweetly from behind a sheaf of bar takings. But what of the people perpetuating this street theatre-with-light-musical-theme? You could imagine many sticksmen, placed in the position of Monotonix’s Bonanza The Cat – spending time composing and recording, admittedly not hugely complex, drum parts before playing shows consisting of bashing one floor tom while being carried on people’s shoulders – finding a tipping point somewhere along the line where the personal satisfaction of this pursuit is dangerously obscure. For all that we applaud loss of dignity in our rock, nothing is less dignified than musicians dragging out a pantomime they no longer feel like acting, way beyond its welcome.

One day, this will probably happen to Monotonix. For now, treat Where Were You When It Happened? as the, in a very real sense, dry run for their shows. Their fun house is as much Pat Sharp as it is the Stooges, but it’s not without its merits.