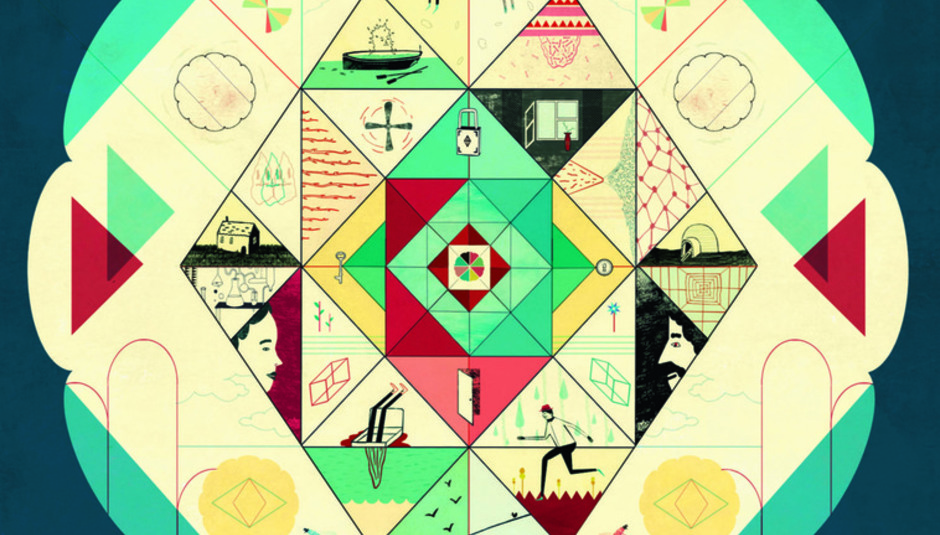 To celebrate the release of their new album, Kaleide, Katie from Sky Larkin kindly agreed to talk us through a track by track. As an extra special treat, the band have also provided us with an exclusive DiS digital version of the album which includes two additional tracks - a cover of Heart's 'Barrucada' and 'Still Windmills' (Ghost Hunter remix). You can buy this special edition of the album right here

Although the words were written in Yorkshire, I came up with the chords to this song in the back of the RV we shared with Peggy Sue on our joint American tour last year. I feel like it still carries that sense of motion. It may also be relevant to note that a pet peeve of mine is that, to some, 'intensity of feeling' always equates 'seriousness' in songwriting.

'Kaleidoscope' roughly means 'observer of beautiful forms', and this song is about seeing the beauty in collision. This album was released 18 months to the day after our first, the speed at which we worked was motivated by a desire to capitalise on the chemistry we'd developed as a live band, and we wanted to record in a way that would reflect that. We ended up sacrificing our accommodation budget in order to upgrade to a bigger studio than last time, to a place John promised had "the best sounding live room in Seattle". We didn't sleep in beds until the mixing process, and in listening to the drum sound on this song in particular, I know 3 weeks of an airbed, a sofa, and a crawl space was worth it.

We are still very fond of 'The Golden Spike' and were not aiming to turn our backs on it when setting out to make this album, but were certainly interested in finding a more wide-screen version of the sound we'd found on that initial record. "Scale" is a word I often had in mind. 'Tiny Heist' is about small moments with large repercussions. The guitar I played on this track is called a 'Manta Ray', which is pretty ace.

'Landlocked' was written very quickly and in direct response to a specific place. It was somewhere I went swimming alone because the boys wouldn't come with me, I think they were watching Cypress Hill. I guess they did us a favour because without them this song probably wouldn't exist. Cheers Cypress Hill. Thanks also to the dad reading the paper on the beach that watched my stuff for me. Part of this guitar line was stored on a pedal incorporating an answering machine chip, and played back, makes it feel even more like a memory somehow.

In a true-life moment (in an actual train-station) this couplet sprang to mind. I wrote it down, and upon later reflection I realised that because I couldn't cope with the situation I instantly referenced myself out of it. I wanted to communicate the intensity of that feeling, not necessarily an autobiographical narrative, so the way the sounds overlap and build is intended to carry that resonance. In addition, it should be said that Doug's synth bassline on this track is pleasingly slinky.

John Goodmanson says this song is "bitchin'". On it I used an c.1980s guitar pedal with an input marked "AXE" and a dial marked "BALLS". Because we wanted to preserve as much live vibe as possible (man), we turned the air conditioning off in the live room to reduce background noise. I was playing a big heavy baritone guitar and had drunk too much coffee and not enough water. There was a near-fainting incident. Obviously the "BALLS" dial was set too low.

I enjoy how many 'ultimates' there are in pop songs ("always", "forever" , etc) so I guess it's quite fitting that the most Pop song on our record concerns the apocalypse. There is however some real biography within the lyrics; we had to do a 17 hour drive between shows in America and our tour manager drank every energy drink he could find, (including a Californian one called "GO GIRL!" formulated for women). At one point during the night, he took a dirt track off the highway that he thought was a short cut to get fuel, which actually led onto a railroad. By the side of the tracks was a white pile of bones that had been picked completely clean, probably by a mountain lion. You should probably also know that this man has been known to affectionately shout "don't you know TOUR is short for TERROR?!" at us. We were assisted in the gang chants at the end by a Seattle choir containing members of Telekinesis!, Boat and The Long Winters. The applause was spontaneous and left in by John when it came to mix.

Ed Ruscha talked about his paintings as "little zones of thought", which is pretty neat. This zone is definitely about reliance and is deliberately sequenced after the party of Year Dot...

Demoing our songs in The Crypt was pivotal to the way these songs developed; it meant that we could capture them at each stage of re-working and avoid over-boiling them. I wrote the basic skeleton of ATM one night, sang it at my computer's in-built mic, emailed it to the boys, and we demo'd it the next morning. The instrumentation did change drastically since then but I think we kept the scratchy, night-time character of the original as we had a blue-print to refer back to. We've made a selection of The Crypt demos available to shed light on that process.

Until I assembled a potential track-listing, I didn't realise how much I'd referenced light in the lyrics to this record. Maybe it's because it was largely written underground and I was clamouring for some vitamin D. I like that the very end of this song is probably our only 'break-down' (finally managed to write one) and also that Nestor's grunts were picked up on the drum overheads.

The keyboard solo at the end of this song was referred to as "the arrival of the penguin choir" during the recording process, though I cant remember if that was intended to be complimentary... This song grew from thinking about guitars, sleep, Antarctica and the moment that thought becomes communicable (and sometimes eventually tactile). It's a thought that seems particularly pressing when we get to see our music in physical format, when our record arrived at the Wichita office I was pretty overwhelmed. We recorded the vocals at the end of a long day. I sang it through 3 times then John stopped me, said we'd got it, and that he didn't want me to overthink this one. He didn't let me hear what I'd done until the mixing process. I did nag at first but relented eventually, so this song also represents the trust we have in him and his role in shaping this album.

We'd previously recorded a heavier version of this song, but I thought that we could use it to close this record with a different sound, but the same sentiment. We made the beats by mic-ing up the live room through a distortion pedal and letting Nesor loose hitting things. A loud day.

Kaleide is out now on Wichita.