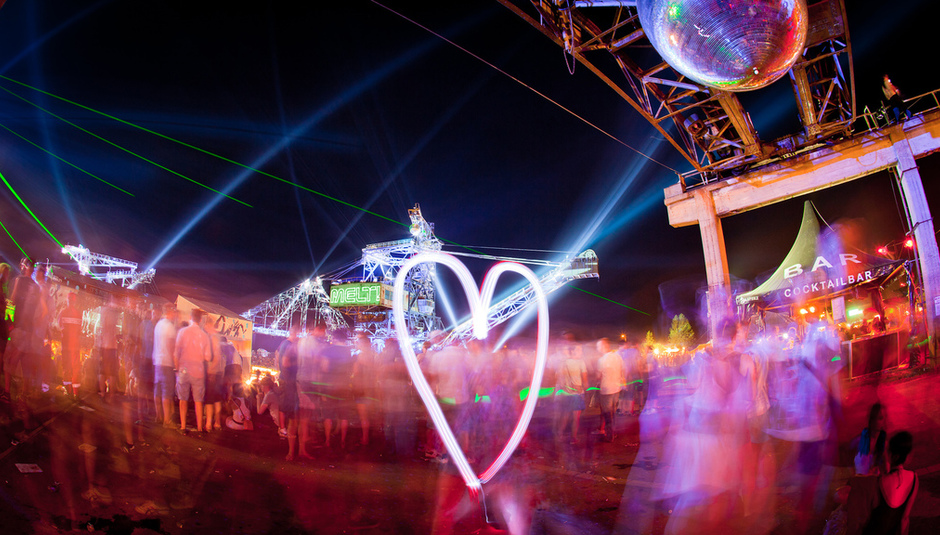 Its Thursday, I’ve just arrived onsite after a monumental bus ride from Berlin to the Iron City of Ferropolis. The sweltering heat combined with the surging pre-festival buzz turns every hour into cold-one o’ clock, so a few friends and I hit the beer tent. Here, a friendly German guy turns round and exclaims in mild disbelief, ‘You’re English and you came all the way out here? Wow, don’t you have your own electronic music festivals?’ At this point I’m still taking in the vast arena shimmering in the distance, then people start diving into the cool swimming lake and I pick up a €1 beer. Erm, not sure if we do festivals quite like this one back home.

The Very Best are the first band to take to the sandy, lakeside Beach Gemini stage. People are polite to start with, still in shirt-and-tie mode perhaps, because fast-forward 30 minutes and the place has transformed into an impromptu carnival, with joyful dancing abound in the glorious sunshine. By the time ‘Warm Heart of Africa’ is rolled out a stage invasion seems like the most natural thing in the world, with everyone joining in singing along and beaming uncontrollably. We leave thrilled, sweaty, and +1 inflatable palm tree.

Next up HEALTH play in the only covered tent at the festival, the Intro Zelt stage, aka THE HOTTEST PLACE ON EARTH. It’s too hot HEALTH. You are very good, and although my Get Color production-love leads me to a preference of the record rather than the flesh I appreciate the energy on show. But I have to escape, unfortunately missing Yeasayer (well, I caught the arse-end of ‘O.N.E.’, which sounded as polished as they looked, singer Chris Keating seemingly dressed as a tin of shortbread) due to The XX playing just round the corner.

Oh Lord The XX were special. Two singers like graceful swans circling eachother, neither quite letting their guard down, giving off untold amounts of fission and quiet drama. Several thousand people stood in near silence at their understated gravitas, a collective held breath as each plucked string seemed to hang in the air forever before being gobbled up into the night. Yum. A hugely accomplished, tight, intensely kinetic performance from Foals next, before zipping over to catch Lindstrom and Christabelle, whose Balearic-cosmic-disco could hardly have been more appropriate, leaving everyone all aboard the party-boat by the time Simian Mobile Disco hit the decks later. Groooo. Inevitable headache here, as SMD finished at 7am, and by 8am it’s already waaay too hot to even contemplate entering the tent. Beers left in here were scalding to the touch come midday, so a pleasant afternoon was spent hanging out in the lake.

Turned up halfway through a fairly ho-hum Friendly Fires set. ‘Come on Melt, dance!’ came the instructions from the stage. Much like having to explain a joke, requesting people dance probably means something’s going wrong, and whilst they’ve certainly got the songs, they lacked the crackle and fizz to ignite people here. Hercules and Love Affair went down the ol’ ‘not playing any actual songs’ route, putting in an hours set of anony-house with one dude on a laptop and three post-gender polysexual concepts dancing awkwardly and occasionally chipping in the odd line from ‘Blind’ or ‘You Belong.’ A pretty untertaining affair to be honest. Thankfully Chromeo and later A-Trak swept in to wash away any disappointment with their unabashed brand of electrofunk party-jams, the latter even joining his older sibling on-stage to nervously thwack a hi-hat or two during ‘Tenderoni’ before bowing offstage. Being a superstar DJ n’all he was evidently not used to hitting stuff on stage and thus it all made for a very sweet scene indeed.

Elsewhere Dirty Projectors had cancelled due to illness, leaving The Futureheads to slip into their spare slot on the main stage. Whilst the away crowd seemed to work against some of the more provincial acts, (Jamie T, he talks pretty fast even in between songs y’know) it didn’t seem to be a problem for the Sunderland boys. "Oh-oh-oh oh-ey-oh" goes ‘Hounds Of Love.’ Easy.

So here’s where it gets a little hazy. Tiga finished off Saturday night, ending at 7am, and the sun has still very much got his hat on. Thus, one hour sleeps are becoming a theme. However, I trudge on. It’s an electro-heavy ending to the festival, with Fred Falke making the first appearance for some laidback spacey French-house. It’s a refreshing, summery set, peaking when Whitest Boy Alive main-man Erland Oye joins in to sing a wonderful rendition of the ‘Golden Cage’ remix. A Goldfrapp/Fucked Up clash led to me choosing the softer, more feminine option (plus they put the latter on in the deathly tent of immense-heat, my body has only so much sweat to offer the world.) Goldfrapp have a raft of very good songs don’t they? They don’t quite rock-the-house, they get a more mellow, grown-up reaction. Applause, appropriate amounts of dancing, nods of recognition towards the likes of ‘Strict Machine’ and ‘Ride A White Horse.’ I was sort of sat on the steps at the back, enjoying all the extravagant costumes and that. Lovely.

Having gained back some energy I sacked off Massive Attack (don’t care for them, sorry y’all) and spent the rest of the night in the company of Fake Blood, Crookers and the ludicrously out-of-it tree-people that constituted the 24-hour ‘Sleepless Floor’ stage. By this time I can’t possibly recall anything of note or hilarity to share with you. I just have a flashbulb-memory of looking up at the collage of lasers beaming down from the enormous German industrial machines and thinking ‘OMG THIS IS AMAZN - TOTAL LYF 4EVER,’ indeed, a very good time was had.