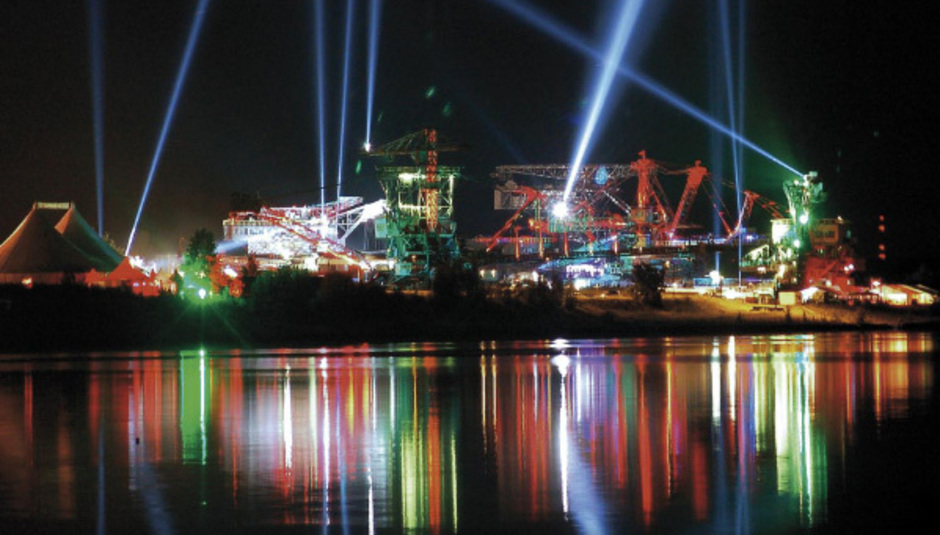 This year the organisers of the 13th annual Melt festival have demonstrated some in making a handy iPhone app that details all the travel information you could possibly need for a confusion-free journey. It’s a good job, as for someone who finds navigating Tesco Extra stores somewhat daunting, the trip 140km south of Berlin to the city of Gräfenhainichen might prove to be quite the challenge.

However, providing my battery lasts as long as the bus journey will, then I’m a quivering mess of hyper-excitement thinking about the surreal treats that lurk onsite. You see, Melt takes place not in a wide open field o’tents, but in an enormous open-air industrial museum called Ferropolis, or, to be grandiose about it, CITY OF STEEL. The six stages nestle themselves in the shadow of vast mechanical relics of German industry, with some of the machines towering 30 meters into the sky and weighing 2000 tons. It promises to be quite the photo-opportunity, especially as at night these behemoths are rigged with lights and lasers, firing beams of concentrated joy into the crowd below.

Fittingly then, the festival (running from 16th-18th July) has a firm emphasis on night-time. Bands start at 4pm, before the vibe-baton is handed over to DJs who carry on the party until the sun gets too scorching to dance anymore, forcing a retreat back to your er, scalding hot tent. There’s a tantalising smorgasbord of acts on offer over the three days. Friday sees the likes of Pantha Du Prince, The XX, Four Tet, Yeasayer and Simian Mobile Disco. On Saturday it’s the turn of Blood Red Shoes, Hercules and Love Affair, Chromeo and Dirty Projectors, whilst Sunday wraps things up with a tasty portion of Fucked Up, Goldfrapp, Massive Attack and Fred Falke, amongst many others.

The full line-up is given on the official Melt website (http://www.meltfestival.de/de/acts,) it’s worth having a gander if only for the exemplary blurb-translations, can you guess the band in question? ‘Noise rock is what those boys from LA have succumbed to. Their plan seems to work, No sign of effeted band members what-so-ever!’ Of course, DiS favourites HEALTH.

The festival also offers a ‘fabric hotel’ service, where a tent with sleeping bag is already pitched for you on arrival, so you don’t need to bother lugging one aboard your flight. Thankfully my pals and I have managed to snag a seven-person one, literally a huge weight off everyone’s poor shoulders. Included with the festival-wristband also comes a swimming-permit for the pristine-looking Lake Gremmin which borders the site. I imagine it’s here in the sizzling midday sun that any ill-advised cider/bratwurst stomach collisions can be soothed with a gentle summer bathing. According to my workings, lots of alcohol + lots of lake = lots of fun.

For a festival ten times smaller than Glastonbury, (last year it had 20,000 attendees compared to Glasto’s 200,000) Melt certainly crams in plenty of reasons to make the long trip to Ferropolis worthwhile. For now I’m off to pack my swimming pants and travel phrase-book, check back for the review after the event.