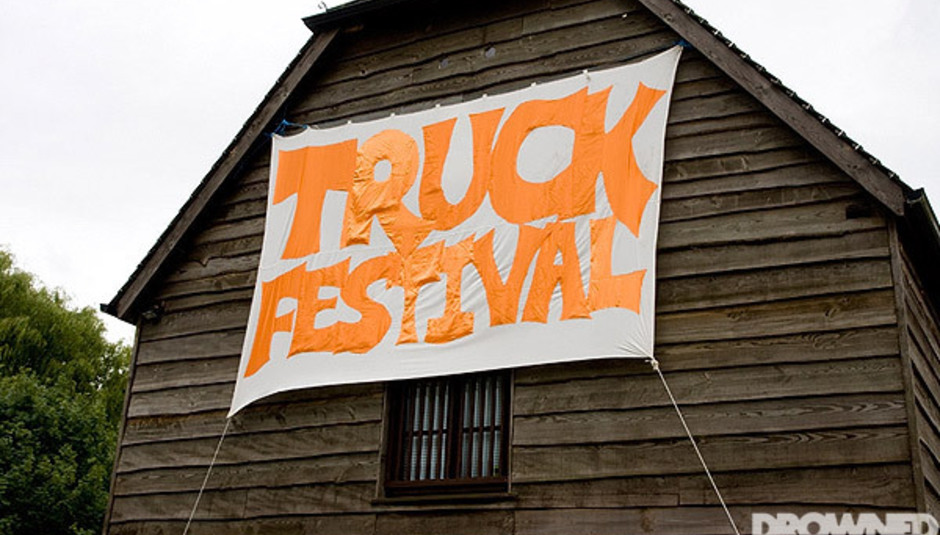 As you well know, this year's Truck Festival is fast approaching. It's long been one of our favourite festivals for obvious reasons. It still is. This year is the thirteenth year of its existence and it has also recently branched out to a sister festival in its native Oxfordshire as well as Truck America - a festival which we'll hear about later in the week.

As part of our Truck preview week Chris Bennett takes us through the enjoyable and LONG process of going through a pile of demos to choose which of the lucky people will be playing the actual festival. Some fantastic choices, really. Take it away, Chris.

This year, for the second time at Truck and the fourth time in all (Truck 12, Truck America 1, and this year's Wood festival) we selected a number of bands from demo submissions. Amongst the bands chosen last year Disasteradio, a ridiculously fun electropopper from New Zealand, was many people's highlight of the entire weekend as seen below:

All of the bands that played were, from what I heard, great. By the end of the weekend, every band I'd had time to sit down and watch play were a vindication of the process, so we thought we'd continue to use it.

This year, the process was much the same. Again, over 400 bands applied, and again the overall quality of entries was almost impossibly strong. I almost feel like I owe an apology to some of the bands, just for the fact that picking twelve from so many excellent acts rendered the task almost impossible. Still, much deliberation, discussion, and pure bloody-minded arguing led to the list being whittled down to just 15.

A couple of bands came back after - being able to invite The Flowers Of Hell to play, after they were unable to make it in time for last year's festival, is a pleasure. They're an orchestral collective based in Toronto and London, have supported My Bloody Valentine on tour, and will play on the Truck stage on Sunday, and will be beautiful in the early afternoon. DiS gave Nedry's debut album Condors 9/10 early this year, and they make a welcome return to the beat-hive: onstage later on than last year, and with a longer set-time.

Probably the most high-profile band to apply to the festival (and my breath did catch a little when I saw the name) is Meursault. The band's first incarnation saw Edinburgh native Neil Pennycook performing songs alone, with just a drum-machine and acoustic guitar for company. Now abetted by a seven-piece band, sophomore LP All Creatures Will Make Merry has been receiving critical adulation whichever way it turns. With melancholic melodies reminiscent of Neutral Milk Hotel's untainted sincerity (aided by Pennycook's heartbreaking delivery), they make essential listening for those of us already in love with Broken Records or The Arcade Fire. They'll be opening the Truck stage on Saturday afternoon, and if there's any justice in the world they'll be having a very busy year from here on in.

Opening the Barn on Saturday will be two bands at a very different point in their development: Ace Bushy Striptease kick things off in the barn with a shout, a dance, and quite possibly a little bit of fancy-dress to accompany their nonsensical fight-pop. Imagine Johnny Foreigner signing to K records, then cover it in sugar. Following them will be north Oxfordshire kids The Gullivers, whose music can at times be so fragile as to almost not be there at all. Certainly, their first release, The Ambulance EP contained enough moments of Explosions In The Sky-esque beauty to hint at bigger things yet to come for their wintery rock songs.

Just across from there on the Last.fm Village Pub (does Scrobblers Arms sound alright?), Silent Alliance's ridiculously hooky pop could well end up seeing them inhabit a similar slot to Disasteradio. However, musically they're a bit more 80s than 8-bit, while over in the Beat-hive Spaceships Are Cool and Something Beginning With L fill out the quota of “bands beginning with S actually”:

Spaceships Are Cool's love of the future reverses obvious musical heroes Grandaddy's ideas of technological malaise whilst maintaining the lysergic country-rock that Jason Lytle and contemporaries like Sparklehorse and the Olivia Tremor Control perfected.

Something Beginning With L members Jon, Jen, and Lucy met through convoluted means, and eventually made up the Fuses part of John Peel favourites Stuffy/The Fuses. Finding themselves on the same musical wavelength (Pixies, Autolux, PJ Harvey) they decided to form their own band: when they're not touring with people like Graham Coxon or Charlotte Hatherley, they play together as 'Something Beginning With L', and make a marvellous noise.

Alongside Nedry and The Flowers Of Hell, Sunday's line-up features another six bands chosen through Sonicbids. Playing first on the main stage will be Oxford's most theatrical band, Borderville. They played on the cabaret stage a couple of years ago, and have one of the best stage set-ups in Oxford. Since the release of debut album Joy Through Work their set-up has become yet more elaborate and electric, so it seems fair to give their labyrinthine pomp a chance to shine on the main stage.

The Holy Orders' frontman Matt Edible comes down from Hull most years, and his bands are often on the line-up, thanks in no small part to sheer musical ambition and an exuberant sense of showmanship. With material including a 14-minute long music adaptation of Philip Larkin's poetry, The Holy Orders will blow away any mental cobwebs on Sunday morning. If you can't make it in for them, and want something to wake you up on a Sunday that's a little bit stronger than a banana smoothie, you can't go far wrong with Phantom Theory. No-nonsense garage-rock that's as loud as it is clever, with musical left-turns here and there, just to screw with you.

In The Scrobblers Arms (that's what I'M going to call it anyway), there are two bands: first up, and splitting vocal duties between guitarists Mark Stephenson and Ruben Everett, Minor Coles are favourites of ours among local bands. Their songs are peppered with big emotional choruses and heart-on-sleeve lyrics that have been honed under Oxfordshire's long, beautiful sunsets.

After that are Fists. Where do you start with a band that's so wilfully eclectic as these guys? You can talk about how they'll happily use a washboard in one song, VU-style feedback squalls on another, or do you talk about the twanging guitars and wurlitzer organ-sounds on the next? With Fists, chances are that it'll sound different again live, rendering this entire description moot. If I'm still alive on Sunday afternoon, I'll try and see them.

Last, but by no means least, is Miaoux Miaoux. The first of two electronica solo-acts from Glasgow on this stage today, the only other similarity that Julian Corrie really shares with Unicorn Kid's hyperactive chiptunes rave-up is that they both wear hats. Miaoux Miaoux is a mellower affair, glitchy euphoric Postal Service chirps and bubbles blended with Corrie's voice, a soft croon that's reminiscent of Alexis Taylor.