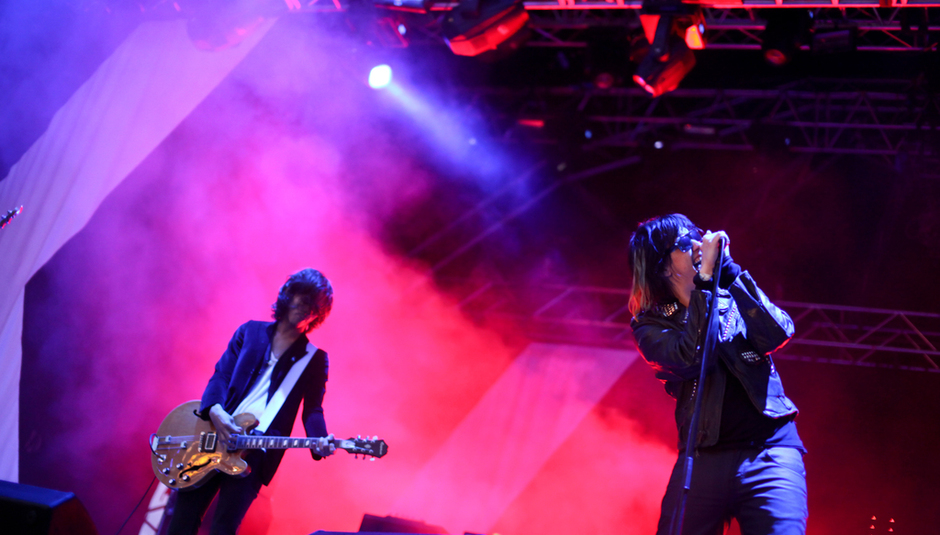 As Scotland's nicer, prettier outdoor megafest returns for its fifth year, we sent our man Neil Ashman to the shore of Loch Ness to report on the doings a-happening.

Nessie was nowhere to be seen (har har), but Alice Glass made for a ghoulish sight on the main stage. Crystal Castles made for a pretty leftfield opener for Rockness, but the aggressive atmosphere of their electro-thrash sound found a receptive audience in the psyched main stage crowd. Much of this was due to a JD-swillin' Glass's onstage antics, leading to security stopping the set no fewer than three times to ask those at the barrier to take three steps back. Thankfully as the set progressed it became more than a purely physical experience with some actual tunes becoming audible above the quake inducing bass; the high-end synth stutters of 'Baptism' in particular possibly sounded more melodic than on record.

Friendly Fires continued proceedings in a DiS-friendly vein. Their groove-heavy organic sound engendered a far calmer atmosphere than Crystal Castles, but the crowd seemed slightly less inclined to groove than they were to thrash, despite frontman Ed MacFarlane imploring the crowd during 'Lovesick', "Rockness, whatever you call it, just dance with me." The Fires certainly seemed a slicker operation than ever before, aided greatly by a three piece brass section with giving the likes of 'Skeleton Boy' an exotic, almost latin-jazz, feel which is missing from their monochromatic recorded versions.

So it was up to Rockness veteran Fatboy Slim to bring the festival's first night to a close in more typical fashion (i.e. have a dance act 10 years past their peak headlining the main stage). The thundering crescendo of a slightly pompous intro video foolishly let me drop my guard and get all excited at the prospect of a greatest hits set. However, this was Norman Cook the DJ as opposed to Fatboy Slim the recording artist, meaning the set consisted mainly of other people songs. Not that there wasn't fun to be had. Any deliriously drunk person will enjoy the intro to The Beastie Boys' 'Intergalactic' cutting through a non-stop party mix, while a brass sample from Dexys' 'Geno' made for a cheery "Duh-duh-duh-duh-ddddduuuuh" singalong, but it felt like old Norm was desperately clutching at relevancy when he dropped jams by Fake Blood and Tom Star. The biggest disappointment was Cook's reluctance to play many of his own tunes, as 'Right Here Right Now' was as truly epic as its iconic video (which showed on the background screen) suggests and the hip-hop style brass samples of 'Weapon of Choice' have aged better than many of Cook's more contemporary selections.

With little to shout about in the early hours, there's time to nurse Friday's hangover until a late afternoon slot for Dan Le Sac vs Scroobius Pip in the Clash Arena (tent really). The likes of 'Sick Tonight' are enjoyable enough, the clumsy treatment of dark lyrical matters easy enough to ignore amidst the frenetic beats provided by Dan Le Sac. When he's not bewildering the crowd with songs about suicide, on 'Stake A Claim' he's preaching simplistically about UK politics to a crowd of couldn't-care-less pissheads. Perhaps oddest of all is the mix of 'Thou Shalt Always Kill' rendering it less recognisable than Fatboy Slim's mix the night previous.

To the main stage, Plan B manages to fill the stage pretty well with his backing band, but not with any presence. 'She Said' is undeniably catchy in a male Amy Winehouse pastiche sort of way it was difficult to totally dislike and his attempts to mix in some dubstep beats and snippets of Seal and Eminem/Dr Dre raise interest momentarily. Unfortunately for the most part, and especially on cover of Paolo Nutini's 'Comin Up Easy', he has the charisma and appearance of some jack-the-lad who's fluked his way into the X-Factor finals. At least his set is mercifully short.

In a change to schedule, before making an appearance as Soulwax on the, er, Radio Soulwax Arena on Sunday, David and Stephen Dewaele graced the main stage on Saturday as 2 Many DJs. The earlier evening stage time and open air environment did not inhibit them one bit. Resplendent in matching white suits the brothers sped through an eclectic playlist from G N' R to Zombie Nation against the backdrop of impressive album artwork animations (one particular highlight was James Murphy rifling through his own records on the cover of This Is Happening). It all culminated in a euphoric 'Love Will Tear Us Apart' and explosions of white confetti.

Richard James' set was a realisation for myself that I am pretty unfamiliar with most of Aphex Twin's back catalogue and any admiration I had for him was probably borne out of ignorance and the impressionability of my young mind around the release of 2001's Drukqs. So it was that the maelstrom of relentless beats, shuddering bass and distorted synthetic waves in the dark confines of the Clash Arena made for an atmosphere that veered from the mesmerising (especially when the lasers were in full swing) to the downright oppressive. With James himself hidden behind his desk and the glare of the lights a pair of gurners twice took to the stage, with close-ups of their faces on the big screen further distorting their crumpled visages to hideous extremes. By the end of the set I was glad to escape into the fading daylight.

Next up was missing the start of Leftfield's headline slot due to an ill-timed ferris wheel ride, which did, however, allow me an excellent view of the crowd, which was pretty considerable for a dance act whose last release was just over ten years ago, but which would be dwarfed by The Strokes the following night. Their set brought to mind The Prodigy's well received show last year, although the hits were sparser and the crowd would have noticed if Maxim or Keith Flint didn't show up; not so for Leftfield's Paul Daley. Nor did the rotating cast of singers and MCs prove as attention grabbing, with the abominably named MC Chesire Cat leaving 'Inspection (Check One)' a bit flat. With their infamously punishing bass less easily felt from where I stood, the majority of the set was spent mastering a pleasant shuffle with only the squelchy synths and vocodered vocals of 'Afrika Shox' a real standout, although nobody could resist the thunderous quake of an encore that was 'Phat Planet' (aka the Guinness horse one).

The Maccabees were comfortable main stagers, taking to it with natural presence and charm. The clicking pitter-patter-come-gallops of 'Wall of Arms' and 'Can You Give It' were equal parts rousing bravado and humble warmth, with Orlando Weeks tremulous waver benefiting from the more expansive backing provided by a three-piece brass section, while 'Dinosaurs's cry of "I keep this pillow, it's a poor substitute for a sooouuuuuulll" exactly the sort of non-platitudinous punch-line you want to bellow en masse. Unfortunately at Rockness the most the crowd are preoccupied with waiting for their next opportunity to chant "Here we fucking go!" during an instrumental section. 'Toothpaste Kisses' was another woozily romantic highlight in a setlist without a chink in its armour and 'Love You Better' was a perfect closer after cheeky snatch of The Strokes' 'Reptilia'.

It was fairly obvious that Blondie would be a slightly embarrassing affair, although not only did we have to suffer new material, but there were some totally lifeless renditions of the hits. 'Atomic' completely lacked in sassiness and featured a horrendous solo at the end.

The main stage crowd dwindled significantly by the time Doves began their set. They're a likeable, but rather workmanlike bunch those Doves. After the football highlight-isms of 'Winter Hill' and despite the propulsive electro touches of 'Jetstream' I decide to nip over to the Go North tent to catch young Edinburgh troupe Meursault who play a short sweet set culled from new album All Creatures Will Make Merry. Live, 'Crank Resolutions' is still a beautifully constructed mesh of fluttering electronics, wheezing squeeze-box (I forget the technical name) and post-rock guitars. The set is too short is to have any lowpoints, but 'A Few Kind Words' stood out as thrilling mix of crisp electronics and crackling organic instrumentation, while frontman Neil Pennycook's earnest wail is bound to draw comparisons with Frightened Rabbit.

The drizzle finally relented in time for the summery timbres of Vampire Weekend. Where so many bands seem desperate to impress and enthuse a festival crowd, Ezra and co come off laid back to the point of being horizontal, despite the constant flattery for the crowd and the call to sing along on '(One) Blake's Got A New Face'. The skies did appear to brighten as Koenig sang "To go away on a summer's day, never seemed so clear". Naturally the crowd reached fever-pitch during 'A-Punk' and 'Oxford Comma', but celebratory airings of 'M79' and 'Campus', were rapturously received. As for Contramaterial, a frantic 'Cousins' was about as visceral as things got (i.e. not very) and 'Giving Up the Gun' throbbed effectively, although a spritely 'Horchata' received a surprisingly muted response.

All in all, however, Vampire Weekend were a perfect pre-Strokes tonic. Drawing by far the biggest crowd of the weekend, anticipation was ripe and The Strokes didn't beat around the bush, swaggering onstage to 'We Will Rock You' and launching into a raucous 'New York City Cops'. A no-nonsense greatest hits set then ensued with 'First Impressions of Earth's more visceral tunes such as 'Heart In A Cage' and 'Vision of Division' preferred over Room On Fire singles '12:51' and 'The End Has No End'. Casblancas found time to further endear himself to an already pretty adoring crowd with a mutual celebration of the fact the USA took two points from England that day. Shooting fish in a barrel really. The main set ended in the same spirit as it began, with a rowdy 'Last Nite' during which Casablancas sang some Tom Petty, whom his horrendous studded leather jacket had already recalled. They returned for a generous four song encore, beginning with 'Juicebox' and ending with Is This It's 'Take It Or Leave It'. If there was one obvious gripe, it would be that they didn't premiere any new material, offering no clues as to what to expect from album number four. All the same it was a glorious end to Rockness as The Strokes somehow succeeded where the other headliners failed in successfully trading on their past glories. Take it or leave it? I'll take it for now, thank you.