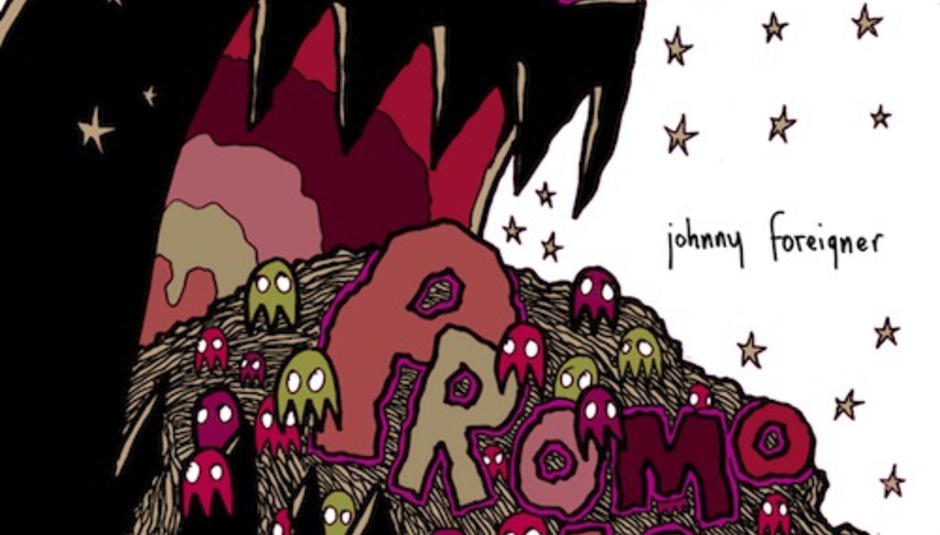 Not the sorts to do anything by half, Health begin ‘USA Boys’ with some kaleidoscopic organ that spirals and morphs in a rather ominous way. And as openers go, it’s dazzling. Here is God; here he is turning up at His House; and now see how his beatific countenance falls; watch him fumble as he realizes his keys don’t work; Health have changed the locks. And as he bangs fruitlessly on the door, inside, the angels fail to hear him - because who has time for dead, dread stories when some dudes from LA have turned up with zooming, transportive modern worship spilling from their pockets. It is the Church of Health, and it is a fellowship of Adam - but not Adam in the first man, biblical sense; I mean the other, naughtier one.

‘No one’s listening’ sing Health at God, boastfully, and indeed the whole thing seems redolent of a kind of clockwork epiphany, as musical cogs – each more monstrous than the last – turn into one another with startling inevitability. Turn with them, it’s wonderful.

N.B. This was previously available as a free download (and that is some shocking munificence, right there) but THE POINT IS you now appear to be able to buy it on a hactual plastic seven, here. And I don't know about you, but I wanna OWN that um, 'mother'.

Tender Trap - ‘Do You Want A Boyfriend’ (Fortuna POP!)

Tender Trap have a very long - and very specific - list of criteria for any new prospective boyfriends. For one thing, he absolutely must like The Jesus & Mary Chain. And for another, they must meet him 'in the rain' for full, swoony effect. And who can blame them - who, really in this world of ours - especially when there appear to be men in existence who deem it appropriate to use the words ‘yeah’, ‘I’, 'it' and ‘porked’ in the same, fubared sentence. Bearing in mind the dolt what said this was supposedly of an age where, by rights, he should have at least been knee deep in his Age of Reason [where is mine, etc], you can't really blame TT for creating the Ultimate List Song Of Twee, Romantic Requirements. I think the chap they are after is essentially one Mr. Bob Stanley, and I think the point they are making in their darling little pop song is that they are not about to Settle. This is admirable, and as I happen to have heard that Not Settling is one of the keys to Long Lasting Marriage And Staying In Love Forever on the radio this week, let us congratulate them. And let none of us settle, settling is for scaredy cats and The Practicals (who must be avoided at all costs).

Not one to let pesky release dates get in the way of writing about singles I love, here I am telling you about Holy Fuck's ‘Latin America’ which it says here it is out today so you know, get over yourself with your insistence and rules. Because I have listened to Muse at least twelve times, I know I don’t have to do what The Man tells me (I know, instead, that it is VEWY DANGEROUS) - even if he is The Music Man; the one to whom we beshrine ourselves. Sadly for a lyric dissembler such as I, there are no words on ‘Latin America’, just enough fizzes, bangs and crashes to keep any Clatter Dance aficionado very happy indeed. I mean, Holy Fuck are so good at this, one feels strangely jealous. Also, stats fans among you will notice that this makes TWO properly MZN, songs-to-transport-one in one week - and if you can’t work out what the other one is, I can’t be fannied to tell you. Lucky we!

Johnny Foreigner - 'With Who, Who And What I've Got’ (Available free – free! - here) I suspect if Johnny Foreigner really want to see an ‘ashtray full of doubts’ (a good line), they would do well to check out my own little pile of disgusting at about 11am on a Monday morning. Because this is when I am to be found furiously editing my singles column and flailing around the house like a massive, writerly ponce. 'With Who, Who And What I've Got’ is also a massive skip in terms of their sound, especially if you thought the arresting charms of 'Feels Like Summer' might have been representative. For one thing, it has sun-bleached chiptune on it, and for another, it's all rather minor-key - with a despondent, stone-kicking air and some sad lyrics about wanting to 'change your mind' (but presumably not being able to - why will you not change your mind for Johnny Foreigner, they are asking nicely, now that's just mean ETC). In the end, all this sad provides a neat counterpoint to all JoFo's usual barrelling sparkiness - and might I say also, how I continue to be won over by their charming artwork - some of which you can see right at the top of the page, where JoFo's monster is - quite literally - eating their 'promo' 'art'. Marketing that eats itself!

Tame Impala say ‘There’s a party in my head and no one is invited’ and I suppose this is fine - it’s a bit like having a good idea and not wanting to share it; halting yourself before you feel compelled to tell everyone on your internets. Or worse - shorten and constrain said idea by compressing it into 140 characters. The thing is, they are liars, because a song like 'Solitude Is Bliss' is nothing if not an invitation to a party - albeit a rather 70s Rockist, psychedelic one. And it's a good single. But as I say, it is Psyche. And because I don’t want to end up behind a speaker stack with a bottle on my head like this guy...

...or leave my mind behind; and because I want full, totalitarian control of my own brain, (or alternatively and if anything, to have it sped up, jolted); and because I don't want my consciousness wibbled into inanity; or indeed, into a state whereby I deem it assetable to buy t-shirts like this one... ...because, essentially, I DON’T WANT PSYCHEDELIA TO TURN ME WRONG, I can't love 'Solitude Is Bliss'. Say what you like about filthy amphetamines; lecture me on their tendency to ravage your internals and pummel your heart; BUT AT LEAST you remain ever you, and not dawdling off on some sort of hideous, Goa journey to the outer reaches of hippie wankdom.

It’s sometimes rather tragic when words used to indicate positive traits become watered down through sly, ironic, modern use. And so it is with ‘pleasant’ - a word I have myself used to indicate niceness (when I meant dullness) and slightness (when I meant flimsiness). But Chief really are pleasant in the best sense – portraying an uncommon sort of warmth and richness – and at points, not a little urgency – in their admittedly still-quite-trad and West Coast way. Essentially when I say pleasant in Chief's case, I mean it like hot, buttered toast and a boiled egg. As in simple, but wonderful.

Having recently decided that I never want to interview another band or musician EVER AGAIN IN LIKE MY WHOLE ENTIRE LIFE*, I now see things alloverthebloodyplace that support this view. One such thing was this – an interview (by the ever-marve Laura Snapes) in which Mr. Hinson calls Obama 'the murderer of the American Dream'. So it's all gone a bit wrong, and that's sad because I am fond of Micah; I had a proper, can't-leave-it-alone splurge on his cover of ‘Yard Of Blonde Girls’ about five years ago. But now he’s just some dude who thinks Medicaid is fair. And, worse, that it’s a healthcare system that works perfectly well as long as you're working hard enough. And though this isn't exactly an uncommon view in America (when I lived in Detroit I was capable of provoking gasps, upon proclaiming that I was a socialist), it's strange, it don't fit somehow with who I thought he were. Thoroughly questionable artwork, anawl - because it seems to posit him as some sort of sexy outlaw, when in fact he is the sort of cove who thinks pro-Bush bumper stickers are 'really good'. OH WEWL.

Gypsy & The Cat - ‘Time To Wander’ (Young & Lost Club)
'Time To Wander' has a nice videothing in which faceless businessmen are posited as robots. And yet it is not anything like as CAPITLIZM 101 as that makes it sound.

Young Fathers - ‘Automatic’ / ‘Dancing Mantaray’ (This Is Music)
‘She’s just like a dancing mantaray’ is not a bad line in lady-appreciation, even if it does compel one to think about women in relation to their fishiness/stinginess/massivity.

Wildbirds & Peacedrums - ‘Iris’ EP (The Leaf Label)
The second EP in as many weeks from the atmospherical twosome. This is lovely, propulsive.

The Good Natured - ‘Your Body Is A Machine’ (Kitsune)
Naturally I really am the sort of abominable arsehole who points out that they wrote about someone MUNFS AGO when and if their single gets a re-release on a shiny label. Anyway, here is the preternaturally talented and 'pletely 'dorable Sarah, who now has her records played in Top Shop and everything. I, for one, am very pleased.

Ghostpoet - ‘The Sound Of Strangers’ EP (Brownswood, free to d/l here)
Dance music's Mr. Joe Muggs and One-Handed Music's Alex Chase recently posited a rare idea for a feature on hip-hop. And this is what they said:

Conveniently, Ghostpoet is one such bored rapper, and on 'The Sound of Strangers' his quiet, drawly atmospherics are well worth a swizz. Track two has that Micachu on it.

Round Table Knights - ‘Cut To The Top’ EP (Made To Play)

*Unless someone commissions me and it involves cash. I just want to be a fan, see? Just like what you are. I mean, not just like you, that would be weird. But you know, still able to appreciate The Musics without knowing EVERY BLESSED THOUGHT its creators have.