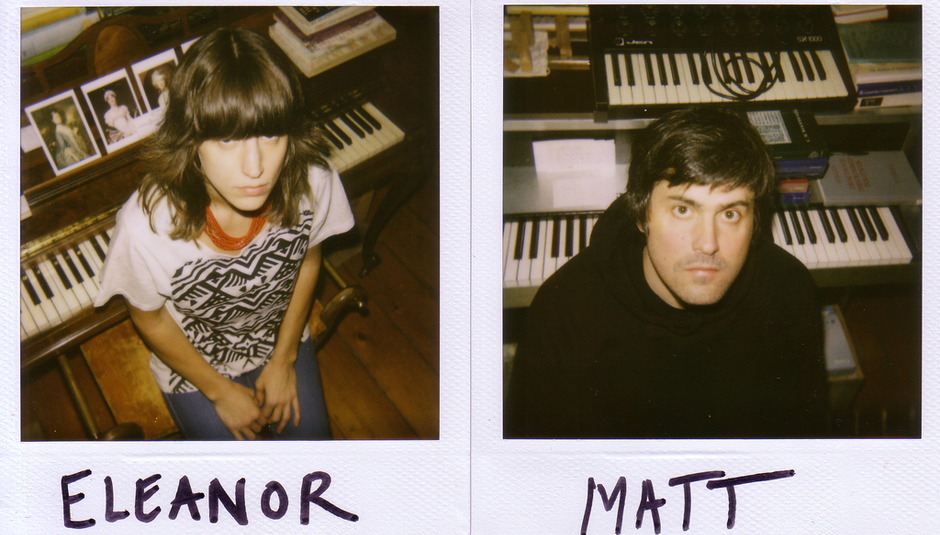 Having made something of a habit of talking to Eleanor and Matt Friedburger in his tenure at the late lamented Plan B magazine, kicking k returns into action for DiS with something like his two billionth interview with The Fiery Furnaces. Matt has adorned these pages quite a lot, recently, thanks to a very confusing and entirely one-sided feud with Radiohead, which this interview sadly predated. Its publication does, however, coincide with the digital release of Take Me Round Again, a digital EP in which the pair 'cover' each others' tracks from most recent album I'm Going Away. As with almost everything about the band, it's very confusing, but you can grab yourself a FREE MP3 (oh yes) of the track 'Keep Me In The Dark', simply by following this link. And if you want to buy the whole thing you may do so at iTunes or Fina.

KICK: It seems an interesting time to speak to you guys – can I call this 'mid-career'?

KICK: It's a sizeable legacy...

ELEANOR: [Laughs] Does that mean we can quit today?

KICK: No! Mid-career. You've got to do another seven, at least.

KK: The span of your career – from early records to now – almost charts the downward slide of the business side of the music business...how has the environment changed for you 2003-2009?

EF: I can remember very well the first time we came to London in 2003, and being extremely naïve – thinking the record label puts you up and... [Silence] Now, I'm counting my pennies and getting receipts for everything. Practical things, I'm more aware of – hyper-aware of...

MF: I do think Remember [2008's double live record which spliced multiple versions of songs from across their career, blithely transmogrifying i. tempos ii. arrangements and often iii. tunes] was the end of one section of the band.

KK: How did that affect your mindset when you came to write the latest album, I'm Going Away?

EF: From the beginning, we called it 'the recession-proof record'. We recorded it at home – the first time we hadn't used a studio. For the flexibility of that, but also... money reasons.

EF: Literally at home. In our homes.

MF: Not in my home. But in Bob's basement. And Jason's apartment. And then in Eleanor's living room.

KK: How did that change the recording process? Is it onward shifts of technology that allowed you to do that? It doesn't sound home recorded...

MF: Yeah. We wanted a standard rock-arrangement record. But recorded in people's apartments. That was a lot of the fun for me – having the most conventional rock record be the one we didn't record in a studio.

EF: We spent more time on it than our others - seven hours a day for several days instead of sixteen hours over three weeks – but seven hours without even taking a break – it was like we were in an office.

MF: But it was harder to get an overview of it, to know it was fine...

EF: It was cool for me doing vocals without Matt being there – we've never done that before – I was my own boss. We'd been working on the songs a while...I knew what I was doing.

MF: We had very different experiences.

KK: If you were to look at this record as a project, what were your goals with it – aside from experimenting with new ways of recording..?

MF: For me, it was the simple tunes all our records had been made up of – but not elaborated on. So, people could listen and elaborate in their own imagination. Or, people who didn't like our past records could listen to this record, hear those tunes, maybe go back and get past the elaborations they didn't like.

Every time I conduct an interview there's one moment (which expands to fill many others) where what was supposed to be a question becomes a monologue in my panicking mouth. Matt and Eleanor sit politely, eyes alternately widening and narrowing as I labour to translate the following note-to-self into a functional question: 'Challenge thrown down to artists in noughties – creative industry's distro/advert-model undermined + media outflanked (MTV to MySpace) Failure of industrial model – artist-companies making products and disseminating through central trunks of label, mass media + retail. Much more necessary for bands to now to hustle for attention rather than let that system do the work – creativity is atomised to memes (novel concepts, creations or news stories) go viral (as opposed to ostentation of hi-budget spectacle).

KK: So... [More silence] ...I feel like...you guys have adapted to that...in the last few years – the behind-the-scenes video to introduce Widow City, for example – I remember seeing that and thinking you were taking promotions into your own hands...

MF: As a rock band, we have to be involved in popular things. Even if it's obsolete pop culture. [Eleanor laughs] Our records are made up of, or inspired by, pop of different...

MF: Yeah. So, that's the idea. People can get attention more easily now, potentially – but can they make money? To do the next project..?

EF: Like the trailer (2) we did for this record, which we did with no thought or planning in an hour – people probably got to know us more in those thirty seconds than they had reading however many magazine articles or whatever.

KK: It's a much more immediate connection. And not mediated through someone else's agenda.

MF: It's mediated by situations – even your twitter postings. It's about performing – even more. We didn't give too much thought to the performance aspects of a rock band – no crazy stage set, no crazy myth – but a lot of bands are more interested in that than making records. And now it's even more of part of being a functioning – even small – band.

EF: It's funny to think about the connections I felt I had to the musicians I loved as a kid that was only based on music – nothing else. Now people have all these other avenues to get to you, and they see you in all these bad ways, I think – I hate the things that are up online of me most of the time. Y'know, someone tapes every show... You don't want everything up there. You don't have to use any imagination to think what your favourite artist is like now – it's all there in plain view. Part of the reason we wanted to make music in the first place was that those people you liked sparked your imagination because you didn't know everything about them, you didn't know what it was all about...

Video: The Fiery Furnaces: 'Duplexes of the Dead'

KK: One change I noticed as you moved Rough Trade > Thrill Jockey was the return of videos – it's not really a question, but I was thinking – in an information (rather than retail) environment, videos replace singles almost, as virtual commodities - concentrated information / spectacular performance rather than physical object.

MF: What you say is right about videos, I suppose. We have not been satisfied with anything we've made in this department. It's a big problem.

KK: I wanted to talk about Take Me Round Again, in which each sibling covers I'm Going Away in their own fashion. I was wondering if part of the reason this album is relatively straightforward is that you knew you were going to have round two... and round three.

MF: In general, the good thing about our band is that Eleanor and I can have totally different intentions about what we're doing – but because we have more in common than we even notice, it's OK, it works.

KK: The last time I spoke to you guys, you [Eleanor] said you didn't know some of Matt's meanings behind songs, and you'd rather not know...

EF: Yeah – the solo thing started with me trying to play Fiery Furnaces songs I didn't know how to play. I ended up doing... new versions that way.

MF: Which is what we do live, when there are too many overdubs on the record or whatever. But, yeah, because I'm Going Away is simple and small you can do all these other things and not overload the record.

EF: At first they'll be digital releases, and maybe then some special seven inches or something...

MF: Eleanor wanted to make things very simple – a folk-sounding record, so I just did things I thought would be slightly different, to have some variety.

KK: And then, this silent album you've been talking about will be released as...sheet music?

MF: At the end of spring. Songs will be written as the thing develops – it'll be more spontaneous than just a compilation of old material lying round...

KK: Won't you find it difficult? If you do write a song you like...

MF: You can't think that way.

EF: We could always do our own version too. It's not sacred.

MF: You can never think 'this is the best song I've ever written'.

MF: I would. That would be fine.

EF: The most obvious thing is to write songs totally out of my range – or that Matt can't play.

MF: But I do feel responsible – that a large part of the book should be playable by people that can't play... especially well.

EF: That I could play.

KK: Does this all tie in with the quote from your MySpace blog --> “The Fiery Furnaces continue to make that 'stark political choice in art: it [or we, in this case] can either reinforce a move towards radical democracy, or help create a new [new? the new reactionary mysticism is still new?] reactionary mysticism.” ..? I see what you're doing with the former – can you expand a bit on what (who?) you see as representing the latter at this time?

MF: Yes, it does. (That nonsense is from the back of a Jacques Ranciere book.) I see pretty much everyone representing the latter at this time. Pop records are a sort of 'misunderstanding machine'. The lack of authority, or almost absolute unimportance of the maker's intention when it comes to pop music, lets it function, at the same time, as entirely egalitarian and as vessels of some sort of reactionary mysticism. This is a big problem in Pop (I mean that in the widest sense); context or use is everything, and origin counts for nothing.

KK: You had me pretty worried with your last stretch of releases because the titles went from 'Remember The Fiery Furnaces' on the live album spine, to I'm Going Away to 'The End Is Near'. Intentional griefbait or coinkidink?

MF: “Well, lots of things were coming to an end, in lots of ways, maybe. The end is always near for something, you know. For lots of things!

In Photos: Arctic Monkeys @ Wembley A...