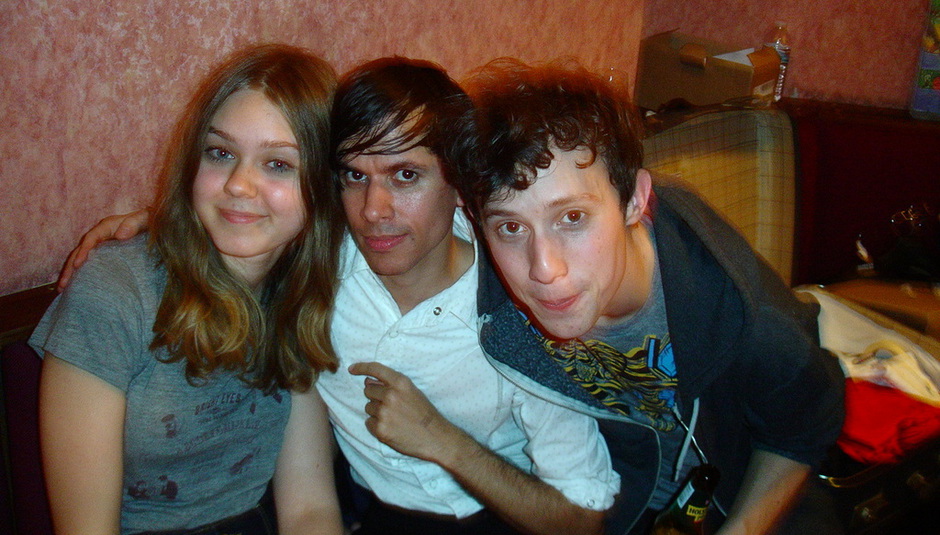 Hello and welcome to the final part of Fanfarlo's tour diary for DiS. They've been off on a jolly tour of the UK this past month or so, much of it with the almost-equally-glorious First Aid Kit, who also did a little bit of writing and picture takin' for us.

In the third and final instalment, they take in Brighton, the fantastical Connan Mockasin in Wales and, of course, The Brud' in Leeds.

A gloomy Brighton greets us for the first of our final three shows of the tour. The copper-domed Hanbury Club, formerly a mausoleum for the Sassoon family, wins best venue of the tour, just edging Bush Hall into runner up. Justin, by now suffering from various ailments and muttering "Oh god, oh god, oh god," as if on his deathbed, finds solace on a leather couch, whilst the rest of the band soundcheck and hurry off in the rain to Resident Records for an instore gig. Rushing to set up a PA and our instruments, we fail to compose ourselves and the first half of our instore just plain sucks! I admit it does improve but the aural damage has been done. Sorry folks! Returning to the Hanbury Club, Justin and I have a romantic dinner of chopped fruit salad and First Aid Kit dedicate their version of 'The Partisan' to us after discovering we are Cohen addicts. After an overnight pit stop at home in London, we hit the M4 early for the drive to Wales. Our only Welsh show prior to this tour was a forgettable night at Callaghan's, the bar-cum-venue of the Holiday Inn in Cardiff, where the sound engineer had to replace the mixing desk before we'd even played a note, and a wall separated the bass amp from the drum kit (never a good thing). We'd erased that gig from memory until Thursday, when John, the promoter at Clwb Ifor Bach, asked if we'd ever played in Cardiff before and it all came flooding back.

No nightmares in the making tonight. Infact, Simon has a dance-off with Connan Mockasin during their show and Klara's a Mockasin convert after seeing them for the first time. The only downside is that due to a curfew we have to play a short set and clear the stage for a dubstep/electro night. Post-gig we sign a bunch of records for some "fans" who promptly put them up for sale on eBay and we're back at our hotel by 11PM which seems odd, yet appealing. Before climbing into our bunks, Simon and I take a stroll to the shops, stepping over half-naked bodies soaked in alcohol and giving the hen and stag parties a wide berth on the pavement before realising it's still only Thursday and not even midnight. They obviously party hard in Cardiff. The Brudenell Social Club in Leeds has a stage perfect for the homemade bunting and festoon lights we've brought along. If anything, it's another opportunity to burn myself on the 25W bulbs hanging behind the drum kit, but Klara beats me to that. It feels as if there's more than a hint of cameraderie in the air and during First Aid Kit's soundcheck, I finally turn Klara and Johanna's "Are you going to drum for us today?" in-joke into reality when I reply, "Yeah" and suggest accompanying them on 'I Met Up With The King'. We practice for a minute before deciding we'll wing it for the gig. It turns out fine, and it's a fun way to end our time together, much better than the start of Fanfarlo's set when Simon breaks a guitar string. We hastily re-jig the set while Bobby replaces the string. Apart from Justin pulling out his bass lead for the third gig in a row, we make it to the finish line to give our Devendra Banhart tour-cover one last airing with First Aid Kit and perform in the audience of the Brudenell. Forgotten words and bum notes matter not as the tour has just ended. Thanks to all who came along. Let's do it again sometime...