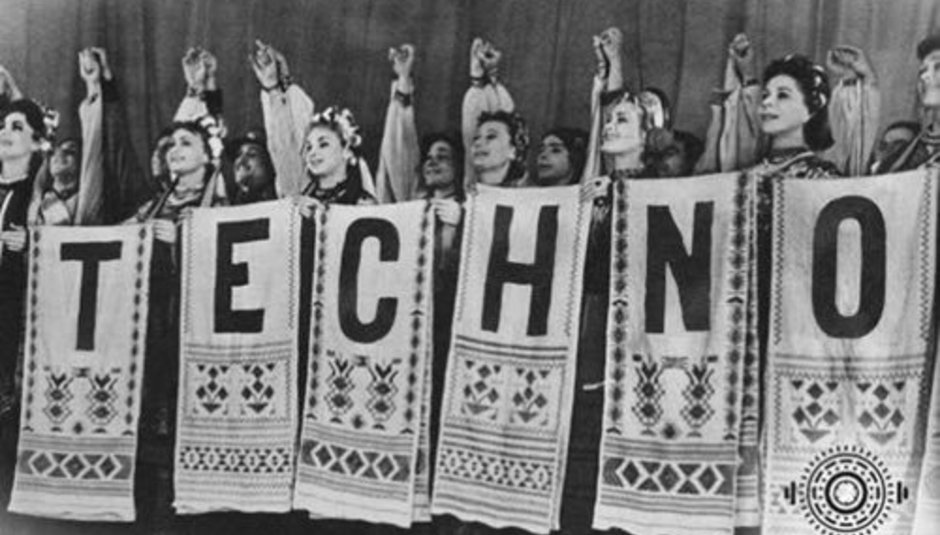 Welcome to Chris Power's regular wander around the world of all kinds of pixelated sounds.

Originally released in 1994, Minimal Nation is Robert Hood's undoubted masterpiece. Rather than just being a personal milestone it's also one of modern techno's greatest monuments, an album that proves endlessly rewarding (well, fifteen years and counting, anyway) in spite of the austerity of its construction.

Just so we're clear, this isn't 'mnml' minimal, much of which - in terms of chord progressions and structure - has far more in common with progressive house (compared to which both it and pretty much everything else is indeed very minimal) than 'proper' techno. While he makes no claims for his music other than it being designed to get people off their butts and onto the dancefloor, Hood's brand of minimalism can be seen to be of a piece with that of Reich, Glass and Riley. Like much of theirs his music changes while appearing to stay the same, the patterns he builds shifting microscopically from bar to bar. 'Museum' is typical, both in that it's constructed from just five sounds (three of which are percussive), and in that it's stunning. Remastered and expanded to include tracks left off the original version (not for reasons of quality, to be sure), this is about as essential as it gets. If you don't already own it, just listen to the bleep funk of 'Ride' or the swirling beauty of 'Sleep Cycle' and, shortly afterwards, you probably will (listen).

Planet Mu is having a brilliant 2009 and a ludicrously good June. Tripping over the heels of the recently drooled-over debut from FaltyDL come three killer 12s. I wasn't taken with Pinch's 'Attack of...' the first couple of times I listened to it, but keep at it and an addictive tune comes scurrying out of the bowels of this seemingly disjointed and forbidding collage of tightly wound 2-step beats, one-note sub-bass and sad, airy pads that catch in your ear with subtle, blink-(or whatever the aural equivalent is)-and-you'll-miss-them glissandos. In the track's second half the bass clambers to the front of the mix, the pads pulse back and forth and an eastern melody trickles between the two. I think I can hear some human voices somewhere way down deep in the mix, as well, although this might just be proof of surrender to my family's unfortunate proclivity for dementia (listen).

Jamie Vex'd's remix of Starkey's 'Miracles' (listen) is every bit as detailed, expanding the understated original without losing its elegiacal feel, the vocal sample twisted and tweaked mercilessly atop chiming bass tones and heavy, intricate, casutically edited beats. On the flip Starkey's 'Creature' begins by getting its fraught and distorted wonk well and truly on before subsiding into a breakdown that blends clock chimes (this is a chime-heavy slab of wax), a distant vocal and a single strum of what I'm reasonably sure is a lute. But probably isn't.

Venetian Snares stuns the world (well, the electronica world; possibly certain equestrian circles) and throws down some vocals on the dementedly poppy 'Horsey Noises' (listen). 'Hey horse-teeth girl/I wanna make you make horsey noises' he sings to a percolating bass melody and some clattery, jazzy and glitched-up drum work. You know when people say "in a perfect world song x would go to number one"? Well, if this song went to number one the world wouldn't be perfect at all: it'd be chock-full of drug-addled lunatics and violent psychotics. Awesome track, though.

Cure fans of a certain age might remember the summer of 1989 as a fraught time of life, one dominated by leaps made in the direction of cheap stereo equipment as those lovely and very, very quiet wind chimes that open Disintegration gave way to an organ blast so loud as to streak your mascara. Imagine the opening chord of 'Plainsong' chopped and stretched to a minute in length, then the wind chimes, and you've got the basic idea of 'II', a stunning (literally) track from Jacaszek's Pentral. Those expecting a similar ride to that offered by last year's sublime and rapturously received Treny might be discomfited by its lack of lush melodies, but perseverance reveals this to be an equally rewarding experience.

Recorded in three of Gdansk's oldest churches, Pentral is an attempt to describe a Gothic church interior in sound. It's certainly easy enough while listening to visualise ribbed and vaulting domes, smoky depths and guttering candles - hell, maybe even a transept or a clerestory or two. Found sounds mingle with strings chopped and modulated in a Murcof-like fashion, scraps of incredibly moving (or, in the case of 'VIII', very eerie) choral singing, tolling bells and digital squelches embedded deep in the mix. Aside from those trouser-spoiling organ blasts, this is a journey so subtle that by the time you reach the meditative climax of 'X' the most scant of editions to the sound design seem epic. I've no idea where Jacaszek is headed next, but I'm going there too.

Hand on heart, you might get a little more out of this making of film if you're a Polish speaker:

Alan Abrahams records as Portable when he's in tribal, microhouse mood, preserving his Bodycode moniker for productions aimed more at the dancefloor. That said, his second album under the name is a collection of deep tracks that, funky as they are, provide equally as much armchair'n'headphones pleasure. The spacious dynamics of 'Meaning and Memory' set micro vocal samples criss-crossing over one another, the percussive and melodic elements so tightly enmeshed that it becomes difficult, and then impossible, to discern where one element ends and another begins.

The haunting title track sets ponderous piano chords against a rich baritone refrain, but it's single 'What Did You Say' (available to totally legally download here) that takes pole position. A retro jacking house track with a tightly funky, muffled bassline that warps around Lerato's increasingly messed with (and messed up) 'How can you say you'll live without me?/How can you say you wanna leave me?', this is already tailor-made for misbehaving to in extremely dark rooms even before the bleeped-out 303 kicks in.

To Anglophone types with an interest in the beautiful game the Italian word 'catenaccio' ('door-bolt') is usually familiar only as a once influential defensive system first employed by Inter Milan in the 1960s. Those who know their techno onions, however, might also recognise it as an excellent Berlin-based label the list of contributors to which includes Ricardo Villalobos, Jay Haze and Butane. The Result comprises label-head Benjamin Fehr and the extravagantly named Falko Brocksieper (boss of Sub Static), who have cooked up two lengthy and seriously involving techno tracks. 'Give Up' builds from skeletal beginnings into a swinging juggernaut, woodbock percussion and snipped vocal samples fighting for space with detuned radio effects. On the A-side 'Niagara' proves an immersive experience, it's popping beat and delayed stabs accompanied by some freakish vocal samples (they're really there this time, believe me) that sound like someone in quite serious distress. Not 'fun' as such, but 100% engaging (listen).

A live performance given to soundtrack the screening of an episode of Takashi 'Master of Pain' Miike's mini-series MPD Psycho_, I Can Hear the Sirens Singing Again is a one-track, hour-long ambient production from prolific Glaswegian Ruaridh Law, who also records as Accrual, Village Unit and TVO. Moving through passages of granular fizz, drone, running water, turntablist spinbacks, backwards vocals and some vast, echoing reverberations, it's a fascinating piece of work even when experienced separately from weird Japanese telly (listen).

Similarly ambient but of a pronouncedly darker hue, New Mexican William Fowler Collins takes listeners by the ears and drags them to some extremely menacing places on his new album. Until he blew it off, this are probably the sounds Bobby Peru had in his head the whole time. Comprising turbulent, stormy drones with titles like 'Grave Robbing in Texas', there is nevertheless an unholy beauty to be found embedded deep inside the pitch desert blackness. 'Dark Country Road' and 'The Ghost of Eden Trail' mark particular highs in this respect, their melodic line formed, I think, from heavily processed slide guitar licks. The title track and 'Slow Motion Prayer Circle', by contrast, are characterised by a seething white noise that sounds like - in fact probably originally was - wind blowing through mounds of cracked skulls. Music to pick up homicidal hitchhikers to.

Untold - Just For You (Hotflush Two) Going all 4/4 and ravey, Jack Dunning isn't just ignoring the dubstep production rulebook, he's refusing to allow his own experimentalism become a rigid style in its own right. 'Just For You' floats a light Fantazia-era melody above clattering breakbeats, judiciously used piano stabs and some rush-provoking (well, this is a rave tune we're talking about) pads. UK funky don Roska slows down the tempo, thrusts some purposeful bounce into the bottom end and scatters conga hits around the central metallic snare. His habit of punctuating his tracks with idents ('Roska, Roska, Roska, Roska' etc.) grates a bit, but I suppose it saves you firing up Shazam in the club.

And finally, some one-line wonders...

Slugabed - Gritsalt/Let's Go Swimming (Ramp)
Slugabed borrows from Skweee but dirties it into something enticingly raw, countermanding the genre's Nathan Barley elements in a trice (listen).

Gui Boratto - No Turning Back remixes (Kompakt) The Mole turns this, one of the better tracks from Boratto's disappointing Take My Breath Away, into a moreish tripped-out kosmische excursion, while Wighnomy Brothers keep the vocal intact but recontextualise it as a seductively brooding techno torch song.

James Ruskin - Sabre/Massk (Blueprint) 'Massk' is businesslike techno that Marcel Dettmann has been hammering of late, but 'Sabre' is altogether more unusual: a beatless, insectoid metallic twang pans around for dancefloor-clearing duration before Ruskin grudgingly remembers his job and allows an astringent beat and fractured, dystopian synth lines to creep in (listen)

Donato Dozzy & Cio D'or - Menta (Time to Express) Rome meets Cologne in the form of this hypnotic techno collaboration, with both 'Menta' (listen) and 'Limone', simultaneously moody and uplifting, operating on the border between minimal and subliminal.

Walter Jones - I'll Keep On Loving You (DFA) If 2009 witnesses a more summery combination than the corpulent synths, dishevelled backbeat, yacht rock guitar licks and warmly echoing vocal of Jones's DFA debut I'll eat my sun visor and wash it down with a pint of Hawaiian Tropic (listen).

And we're done. Parting is such sweet sorrow and all that, but I'll attempt to sugar the pill with Londoner L-Vis 1990's absolutely killer 'United Groove' (Mad Decent). He - probably pisstakingly - calls his style hyperbass, blending as it does the best bits of grime, funky, dubstep, tribal and jungle. Whatever it is, it's moreish.