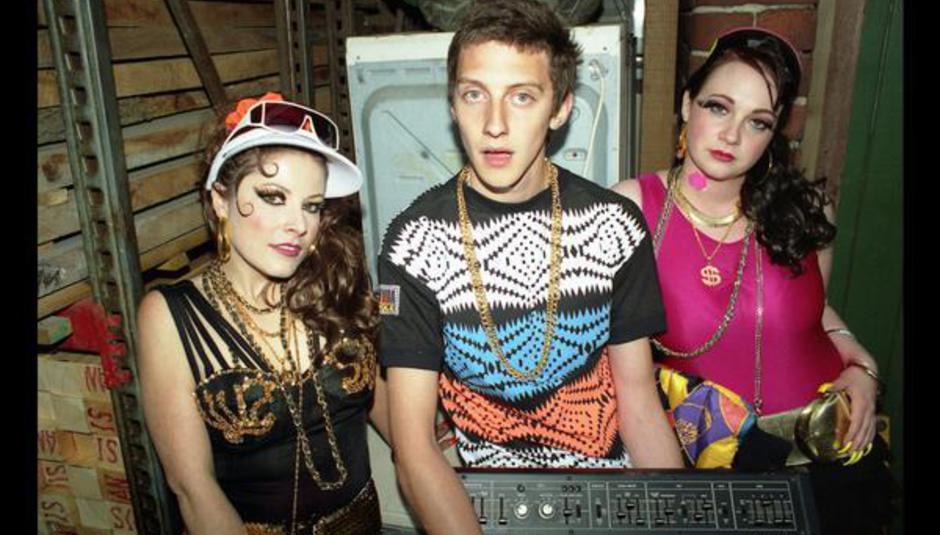 This week sees a veritable Sheffield saviour trounce the competition, a not-new-anymore popstress finally getting her debut out, and a fair amount of lady-based hatred from art-poppers Plugs. Lots to recommend this week, then (as well as it being the third week in a row I have managed to shoe-horn in a reference to R4 programming). It’s rather gratifying when a scrawny-looking, fuzzy-haired Sheffield native pops up in the singles sack and proceeds to demolish (and I mean, DEMOLISH) the week’s competition. But that’s exactly what Tom has done here, producing a single which is essentially 'Bingo Bango' for 2009, but with a riddim-riddled style all its own. This is - to grasp a well-worn cliché from the shelf, dust it off and stick some new AA batteries in it – simply the most fun you can have with your clothes still on, despite MC Serocee’s instruction to take them all off. I am slightly cringing as it reminds me, with a sharp pang, of when I had to interview Mr. T and was reduced to feeling more middle class than a bucket load of floppy-fringed Borises (I could barely understand a word he said) - but that is the peculiar problem of this estuary Jessie. Anyhoo - back to the matter in hand - this has a stellar line about ‘She-she, she looks good when she’s angry!' / 'But she’s too feisty’ which makes me giggle and think about boys who pursue scary girls what look permanently pissed off - and who then wonder why, once they’ve bagged them, why they get no end of ear ache. THIS RECORD IS AMAZING AND THE ARTWORK IS POP! POP! POP! LOUD AND STARK AND I LOVE IT. Sorry, it is really good though.

The final bendy kick in a hat-trick of nigh-on perfect, angular pop releases, this sees Plugs tell a supremely nasty tale of bad wimmins who done bad things and who are now really gawn giddit. And I am not sure what has happened to these boys in the field of love, but this is the sort of thing Patrick Bateman might sing before he hacked your bits off. With some uncomfortably bitter lines like ‘When you get to the gates of heaven' / 'I’ll be standing there with a chainsaw in my hand’ and a chorus of ‘All them witches' / 'All them bitches’ – this is what you could play your male friends when some utter cow has flopped into a hundred beds with a hundred other chaps - with the caveat that this is (presumably) meant to be a joke, and that men do bad things too.

Plugs - All Them Witches from Seb Lloyd on Vimeo.

Impossibly bewitching, this has some gorgeously wibbly pace changes, oddly Gaelic (for a Norwegian) harmonies and a deliciously spooky refrain in which Ane reassures the subject of her pop song that she ‘wouldn’t doooooo that to yaaaaaaaaaaa’. Fast forward to around 01:45 to see what I mean – it’s the aural equivalent of a ghostly screen-transition in an episode of Tales of the Unexpected. So if you can imagine or get excited about the prospect of a chanteuse who combines the glories of Dolly circa ‘Jolene’ and the McGarrigles circa ‘The Swimming Song’ (and I for one could not wish for greater) then this will make your week. Yummy, and an ace video which manages to combine Kenny from South Park, Dead Man’s Shoes and The Piano.

Having attracted her fair share of vitriol since winning the BBC Sound of 2009 poll, and having had her album poked at side-by-side with La Roux (They have keyboards! They’re girls! They’re the same! Etc) it’s now time for Victoria to face the real shallonge (cannot spell this word proply since Raymond Blanc, forgive me) - that is, getting to the top of the pop charts. And having spent the last month drip-feeding Hands into the pop arteries of my brain, I can only say this. Yes, it’s all very disappointing when an ingénue has been peddled our way as an alterna-pop thing (associations with Joe Hot Chip, painfully fashionable remixes from Fred Falke) but then getting annoyed when she makes throwaway pop seems rather churlish. It seems to me that Victoria Hesketh has always been quite clear about her intentions and influences. Exhibit A, she covers Haddaway in her YouTube sessions, Exhibit B, she fingers Natalie Imbruglia and All Saints among her favourite artists and Exhibit C, she is a mainstream, commercial popstar who has made a mainstream, commercial pop album. So don’t be surprised when, if your main commitment to pop music has been the purchase of the odd Girls Aloud album, you don’t like what she produces - because perhaps, you big angry thing, she isn’t making music for you. Anyway, I happen to think that the odd lyrical polish aside, this is brillo. And - just to add some serious flippancy to the proceedings - I love her necklace in the video.

While Captain Mark Ronson’s brass boat sailed in 2006 and enjoyed a smooth sailing on the soul-pop seas, now it’s squally showers for Merriweather’s Cromarty. The poor chap doesn’t even release his album until June - June! – and inexplicably, I do feel genuinely sorry for him. I think this is because he has a pleasant, nice bloke face, and not because this record is good (it is pretty horrid). Super-apollies for the painfully laboured metaphor, everyone.

Left With Pictures – ‘Every Stitch, Every Line’ / ‘Her Father’s Nose’ (Organ Grinder) Enormously perky and twinklesome, this has shades of Dog on Wheels-era Belle and Sebastian and quite simply the poshest lines of the week (‘While acting as an arbiter between culture and you' / 'They say this simply isn’t satire, every word we say is true’). First, I will tell you that this is very accomplished, very sunny, very singalonga and impossible to resist. And then, I will bugger off on a tangent in which I reveal that the backing fellow on ‘Every Stitch, Every Line’ SOUNDS EXACTLY like Matthew Horne from ‘Gavin and Stacey’. And I mean exactly, exactly how you would expect Matthew Horne to sound, were he classically trained and in a wicked-good, chamber pop band. Just saying.

Left With Pictures on MySpace

Kill It Kid – ‘Send Me An Angel Down’ (One Little Indian)

Really quite odd, Kill It Kid’s Chris Turpin is in possession of a voice which manages recall both Alison Moyet and Joan Armatrading. In fact, it was all so alarming I was forced to scour their MySpace to make sure he is an actual man. Anyway, having done all that, it then transpired that ‘Send Me An Angel Down’ has levels of rootsy emotional outpouring I am - if I am honest - rather uncomfortable with. But they genuinely don’t sound like anyone else at the moment, and that is always rather pleasing.

Ladyhawke - ‘Back of the Van’ (Modular / Island)

Timely re-release for anyone on catch-up (and I could be wrong, but it feels as if Pip is enjoying a late, slow-burn Indian Summer with her album sales - as fifty pound man finally discovers her, a year on from first release). Sadly I am not really a fan and was always rather puzzled by the Stevie Nicks comparisons, which seemed to be more about them having a shared shag hairdo than sounding anything like each other. Still, anyone who gets excited about Super Mario is alright with me.

I was expecting to not like this, but it turns out Mr. Coxon has churned out a rather sweet little stomper, shot through with an acoustic riffle which reminds in unequal parts of Donovan’s ‘Tangerine Puppet’ and even – a very little bit – The Zep’s ‘Bron-Y-Aur Stomp’. Albeit both those tunes with an added whiny load of indie smeared on top. The trouble is, as soon as I went into iTunes to ensure the correct spellage for ‘Bron-Y-Aur’, I turned Graham off and listened to that instead. And they really are quite good you know, those Zeppelins, and even more amusing when your Mum is a dead ringer – true fact! – for Robert Plant. (I shouldn’t say that, should I? I won’t get any tea.) Anyway, back to Graham, who is still rocking that last-to-be-picked-for-the-rugby-team vulnera-boy persona – I think it is time to stop that. After all, he’s 40 now. 40!