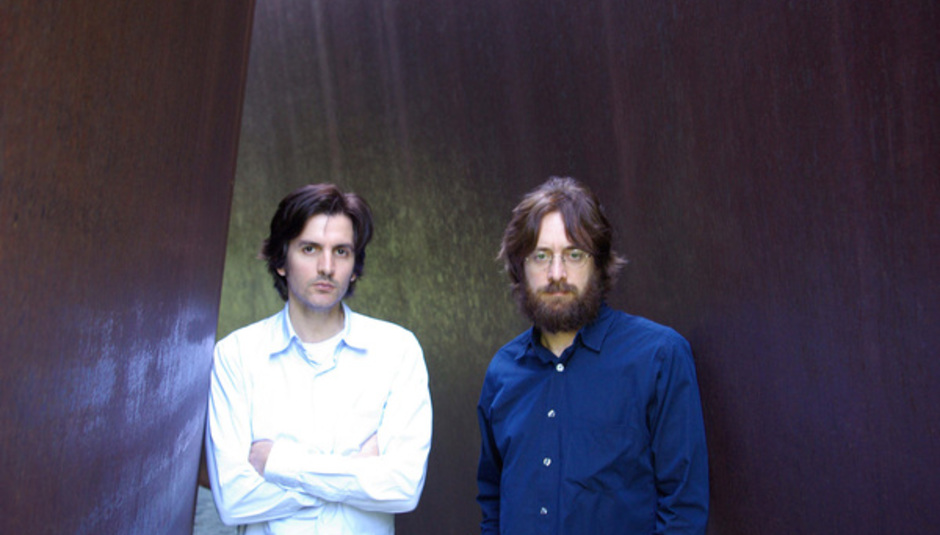 Throughout the 1990s, the Brothers Kadane (Matt and Bubba) brought wit and eloquence to their depictions of life going slow in Dallas TX, and with a fondness for non-rock time-signatures, every song manages to have gentle surprises. In fact, for a band with such an identifiable style, it’s remarkable how fresh-sounding they are after almost two decades. However lethargically any given song begins, most will either rise to a glorious climax (prefiguring much post-rock), or unfolding delicate figures. Their albums – all recommended, and most of them essential – are, as Bedhead: What Fun Life Was (1994), Beheaded (1996), Transaction de Novo (1998), and as The New Year (with Codeine drummer Chris Brokaw), Newness Ends (2001), The End Is Near (2004), and The New Year (2008).

DiS: What do you feel led to the “Slowcore” label being applied to you? The press, or fans who were looking for bands that matched their mood? Has it helped or hindered?

Matt: I guess it depends on what the term means, or eventually comes to mean. If it only suggests tempo, then it is limiting with respect to the varied music I think we've made. If, on the other hand, it comes to suggest deliberateness in song construction, an appreciation for the value of the soft and slow alongside the loud and fast, and maybe even the measured and less market-driven pace at which music gets released into the world, then I don't have as much of a problem with it as a signifier of much of what we've been about.

DiS: Do you see a meaningful relationship between Slowcore and Hardcore (particular structures, use of time-signatures… or attitude, and scene-origins)?

Matt: In the beginning I thought of us as, in part, making a sort of quieter calmer music that some hardcore types could happily accept. And with respect to our labels and the bands we played with, we were part of the hardcore world (although "hardcore" is a problematic category too), at least in the 1990s, when there were fewer categorical options to find ourselves associated with. At the same time, what we were trying to do, at least in the beginning, was reactive to much of what hardcore was becoming. All the bands that came along in the early 1990s looking for ways to repeat Nirvana's success by starting with screaming vocals, heaviness, and aggressiveness made some of those tonal qualities almost comical. In the face of that we were driven, if we ever really had a grand strategy, by a desire to help restore to rock music the fuller range of its dynamic power and, in the process, its credibility.

DiS: The creation of Slowcore can be seen as a reaction to the brashness, loudness, and sometimes crassness of the (paradoxically, dominant) "Alternative" paradigm in the early-1990s – an alternative to alternative. Does that follow, for you? Were you just drawing on bands you liked?

Bubba: If we were driven by anything it was to make music that we weren't hearing and that, of course, moved or excited us in some way. We've never wanted to do anything that we heard someone else do. There were some bands that made great records in the 90s that were inspirational, but what we reached on the first Bedhead 7" in 1992 was a sound and way of playing and arranging music that we had been working towards for years. A few of the songs on the first Bedhead record were from the late 80s. We were constantly making music, and jettisoning a lot along the way, but the songs that we hung onto we broke down to their essential elements, re-imagined them, and in many cases started to gradually slow them down. We didn't do it because we had a big idea about creating a band that made slow music, but because the songs just sounded better to us that way - maybe there was more of a groove, or space between the notes that allowed a simple harmony to ring out, or even just a growing natural inclination towards a type of music that we were more comfortable making because it suited our personalities, voices, and approach to our instruments.

[Bedhead at their most somnolent...]

When we first started playing as Bedhead and had reached, mostly in isolation, what we were searching for - a three guitar, bass and drums instrumentation, songs that had matured to our satisfaction, playing beyond an amateur level, etc - we started to try to book shows around Texas, and it wasn't easy. No one would pay any attention to us. Harder edged music was king, especially of the Butthole Surfer's mold - the more dissonant, threatening, and freakish, the better. We finally got shows in Dallas, Austin, San Antonio, and Houston and were always on the bill with loud and aggressive bands. We showed up for the first of a few shows like this in a mild panic because even though we had songs that were loud or noisy in parts, it was, we thought, not what these audiences were looking for. We tried to think of set lists that favored the noisy songs, but quickly realized we just had to play our set and not worry about it. We did, and the audiences always responded well. Our following grew quickly in Texas and the musical landscape changed pretty quickly too. (There was point not too long after where most of the bands that wanted to open for us were more quiet and slow than we were.)

That is all a way of saying that we definitely reacted to, as Matt mentioned above, so many of the ways that modern music is produced and marketed, but at the same time, I feel that musically we were doing what we wanted to do and it was maybe just the right time for it.

[...and The New Year at their fastest, and heaviest]

It goes without saying that the music press creates associations and conditionals in order to categorize music into "movements" that don't really exist. There has obviously always been slow music, but the creation of the term "slowcore" maybe just came about because music like ours just stood in starker contrast to music that was becoming harder and more aggressive all of the time.

DiS: Who are the “Slowcore” bands (if any) you liked / considered to be fellow travellers?

Matt: I like certain things about a lot of the bands that get lumped into this category -- Slint, Codeine, Galaxie 500, Low.

DiS: How do you feel you’ve developed musically, and lyrically (both/individually), since the early 1990s?

Bubba: For me, the new album represents many of the things that we have always tried to do alongside newer interests, approaches, and directions. It retains elements of how we have worked, such as using multiple intertwining guitars, while incorporating new ways of building and structuring songs, varied instrumentation [more acoustic guitars, Matt on piano, and an uncredited electric organ, reminiscent of American Analog Set...], and a less reserved approach to playing and recording [...see for instance the almost fluting tone of the guitars merging with a ringing piano-line on 'The Company I Can Get', one of the biggest songs they've yet recorded, although anything but obvious. - Slowcore Ed.].

Bubba: It seems like a lot of our big news is just behind us: the new album [The New Year (2008)], the tours of the US and Europe last fall, but it looks like we may play the Primavera Festival in Spain with a few other shows in the vicinity in May.