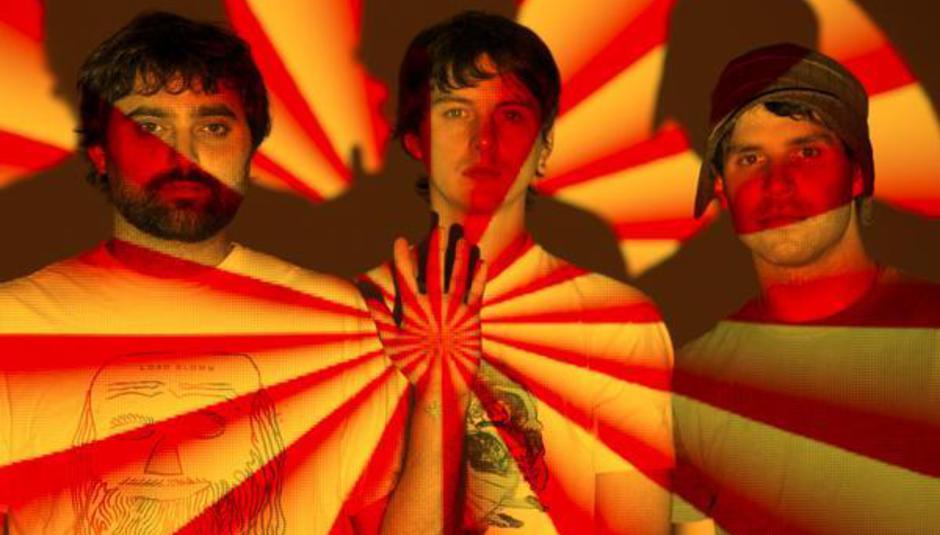 Merriweather Post Pavilion, then: pretty amazing, right? The band are in the UK at the moment demonstrating its blissed-out magic in a live setting, so DiS thought it high time we had a word. Here speaks Geologist - aka Brian Weitz - about the new record, absent friends and - with refreshing honesty - the thorny issue of the day/month/decade: downloading...

The response to Merriweather Post Pavilion has already been pretty phenomenal over here - were you expecting it to be so immediately popular?

We never really know how things are going to be perceived, but we love this record and think it's really great. We're really psyched that it's been received this way. We thought Strawberry Jam was maybe a little bit less accessible but everyone said it was our pop record, so at that point we sort of gave up trying to guess how people would perceive our records!

Do you read reviews of your own band?

We read them. Everybody we work with always forwards them to us anyway and puts magazines and 'papers in our faces. You're always curious when you put something out there to know what people think of it. We worked really hard on it and it's not so much that you want everybody to love it, but you at least want them to respect it. We just hope that it gives someone something, and of course we hope that our fans love it. So yeah, you certainly see [reviews] and it feels good when you read one and someone seems to understand what you're doing or appreciates it. I don't think reading it or not reading it is the important thing, it's after you've read it not letting it affect you - whether it's positive or negative.

I guess you can't make records to please journalists, it's a case of pleasing yourself first and then seeing what happens...

Well, y'know, we can't even make albums that please our own fans! Our music has changed so much over the years that we're used to some of them loving one record and others hating it. We've been doing it for a while, so we're used to not pleasing everybody every time.

With the whole downloading thing I suppose it's easier for people to have an opinion immediately after they've heard, like, half of a 128kbps vinyl rip or something like that. What are your views on leaks?

We take whatever minimal steps we can to prevent it, but we know records are going to leak. It's not even about whether it's free or not free, I mean the day you release it it's free to the world anyway, what with the technology these days... I have a lot of strong personal feelings about how people consume music these days, even myself. That's why I have these feelings; because I can see how my own listening habits have degraded over the years with the advent of the internet. Like, when people tell me about a new band that I should check out, before I would have gone and bought the record but now I go to Myspace and listen to 20 seconds of their song through my laptop speakers and I'm like 'whatever' - I think that's disgusting on my part to form an opinion that way. I'm trying to break myself out of the habit. People ask, 'why do you give a shit about a leak, it's going to leak anyway, it's such an outdated, antiquated way of approaching music' and I guess that's true, but I'm unapologetic about it, in a way, growing up in a time when the internet wasn't around. I always think back to when I discovered Will Oldham's music... at first I bought the record because it was on Drag City and I was like, 'Well, I don't get this, is it country music or is it Americana music? It doesn't sound like Pavement, I don't get it'. Y'know, I was like 15 years old and if it had just been MP3s on my computer that I didn't buy or have a physical copy of I'd probably just have deleted it and never listened again. But because it stayed on my shelf I put in effort to get into it, I kept going back to it. And there's just one day, I don't know if it's because the weather is right or you're just in a different mood, but it suddenly clicks for you. Personally, I don't have that many experiences like that anymore because I've been taken in by the accessibility of music and I'm disappointed by what that's done to _my_ music. That's why I'm not into the whole leak culture or digital music in general. I don't want to take part in it by being, like, 'Leak our record' or whatever. Even streaming it before it's released, that goes against my views on how music should be listened to. Doing that or putting it on iTunes first, it's giving people another option from which they can hear your music for the first time. That's my feeling, it's very personal and it has nothing to do with the industry war that's going on right now or anything like that.

Is that a band viewpoint, then? Do you guys all agree on the issue?

Not so much. Noah [Lennox, aka Panda Bear]'s not an album person, he doesn't listen to a record from start to finish. He just likes songs and he's fine with listening to music on his computer or whatever. Deakin [Josh Dibb]'s in the middle of us and Dave [Portner, aka Avey Tare]'s more like me, he's an album person. I think we're all close to having that opinion, I think we all agree with it but some of us feel more strongly than others about it.

The track 'My Girls' has been picked out by many as an album highlight - do you have any particular favourites on the record?

I don't have too many favourites on this record, I think they're all pretty good. Although I really like 'Guys Eyes' and 'Taste', the back-to-back tracks... that's how we composed them, I had two different loops of these flutes, which we decided to use to join the songs together - even from the early days of playing them live, I've always been really into that moment on the record. Dave and Noah's vocals on those songs, too... Dave wrote 'Taste' but then Noah wrote his own vocal part for it that's like a completely different song over the top. One [of the parts] grabs your attention and then this other one comes in with an amazing line and that grabs your attention. You can weave in and out of those songs, every time you listen it can be a different experience in terms of what you follow. I'd say that part of the record is my favourite. We like the idea of continuous music, and a combination of psychedelic music like The Grateful Dead with DJ or dance records, one track flowing into the next.

Can you imagine ever playing one of your records in its entirety live? The music would seem to lend itself to it...

I don't know... certainly not the old records as we don't even have half the shit we used to make them, like Minidiscs with field recordings have probably been lost or taped over, the instruments we used have maybe been broken... we probably could do it, but we'd have to reimagine them rather than play them how they were on the record. We've been having fun reimagining some of our older songs lately but we haven't thought about doing it for a whole record yet. I guess we never say never!

Deakin doesn't play on Merriweather Post Pavilion. Why is that?

He decided, before the end of Strawberry Jam, that he was going to be taking a break for the next record, mainly because he didn't want to be a part of touring so much. As we were finishing up on that record he was like, 'I'm probably going to be sitting the next one out'. It was too short notice to work out how we were going to play a lot of the old songs live so we had to write new ones, that's kind of how [Merriweather Post Pavilion] came into being. And you can't really jump in in the middle of a record, so we decided if we wrote a new record in the middle of his break, it was going to have to be just the three of us. But that's also the way it was with Sung Tongs and Danse Manatee, where one member didn't play on them.

So how did his absence affect the songwriting and recording process?

It made us go, 'Well, we've done a few records lately where his guitar playing has been such a big strength' [Pause] Hello? Are you still there?

My phone's about to die in, like, two seconds. We rented this bus in the EU and they only gave us a UK plug so we can't charge it... Anyway, yeah, we decided to rely less on the guitar and more on electronic instruments like samplers and what-not.

I'll just ask a couple more before we get cut off, then. What do you enjoy more as a band: working on the records in the studio or playing them live?

Personally, being in the studio. I love both, y'know, but if I had to pick one I'd choose the studio. I like the pace of it, the constant creation and the surprises it can bring. They can come live, too, but not at such a relaxed pace. I just really enjoy the studio a lot.

Lastly, then, we're soon doing a week of new music on the site, so I was wondering what new acts you think our readers should be listening to?

We all really like Grouper a lot. She's a girl from Portland, and not exactly new, but the record she put out last year, Dragging A Dead Deer Up A Hill, is really fantastic. Zomby, who's from the UK, and his record Where Were You In '92, we've been listening to a lot as well.