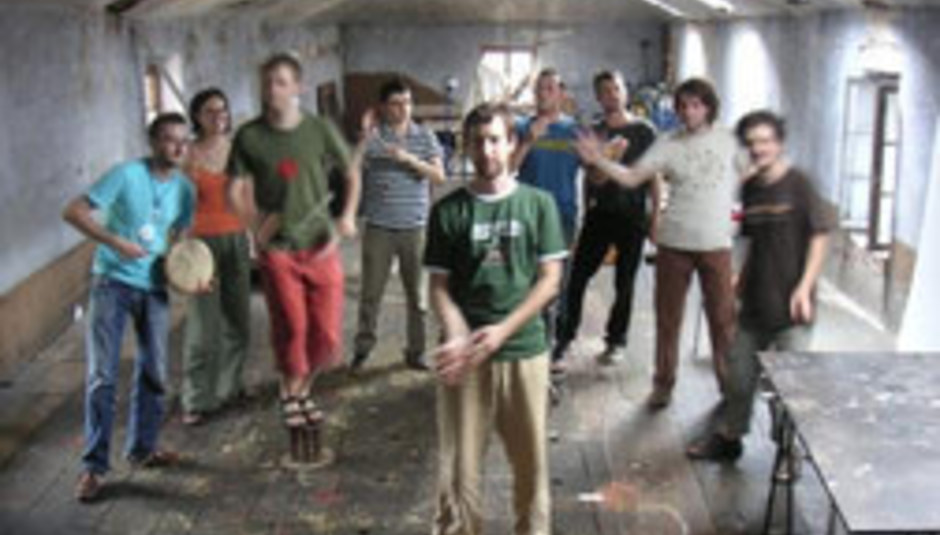 Mickaël Mottet is the brains behind one of 2008’s most bizarre yet accomplished albums. Angil & Hiddentracks opus Ouliposaliva is centred on one musical and lyrical restriction: no Es - in both the notes and the words - but without having that conceit govern the whole record. It’s a scintillating mix of lyrical dexterity and sparse but effective musical motifs. In short, it sounds really fucking cool.

DiS snuck a few detailed words with Mottet – watch him deftly explain our queries away, rendering the album experience a true interaction!

With such a strong central concept for an album, did you find the lyrics made you less able to express yourself? In other words, did you make any sacrifices because of not being able to use the letter ‘E’?
I wouldn’t say I made sacrifices – I had to find different ways to express what I meant, but it was a very stimulating challenge. “In other words”, literally... It was like opening unexpected windows. I ended up writing faster than ever, actually!

The central conceit of the album could’ve been a quite debilitating one – was it your intention to make the album work even if the listener had no idea of the ‘rules’ surrounding its composition?
Oh yes, it was! I never want the process to go over the result. In Ouliposaliva, I didn’t use a restriction to show off; it rather was a personal creative device, really. And anyway, what counts in the end is the song itself, isn’t it?

The instrumentation of the album is reasonably sparse – has it always been your way to not use a more traditional rock ensemble?
My music has kept evolving in this direction. In our previous record, there was a song untitled “No more guitars” – there is indeed hardly any in Ouliposaliva, though we do use guitar quite a lot when playing live.

I’ve been inspired by people like Wyatt or Tindersticks, who sometimes use strings and brass in a very chaotic and noisy way. Also, French philosopher Gilles Deleuze’s notion of ‘becoming’ is quite central in our work. Ask a trombone player to think of a ‘becoming-animal’, or a ‘becoming-an-old-dignified-man’ while doing his part – most of the times it is a mind-opener.

Tell me about the piano you found for the album. Did many of the songs start on this instrument?
It is a 1904 Focke piano (what’s in a name), which was part of the setting in a clothes shop around the corner from where I lived at the time. They were doing clearance sales; I bought the piano for next to nothing. It needed some tuning, though, and some of the keys would play two different notes at the same time. When I started trying it, I realized I had all new melodic ideas thanks to these weird atonal sounds. I decided to not have it tuned, and to use it as a “randomly prepared” piano, so to speak.

The principle was pretty much the same as choosing a restriction for writing: many unforeseen ideas came from these “two-note keys” playing shadow harmonies that I’d never thought of otherwise. Being a huge fan of Gil Evans’ 1960s arrangement works (some of which, like Las Vegas Tango’s, can be quite dissonant), I couldn’t have been happier… I wrote almost all the songs of Ouliposaliva on this piano, actually.

Musically, much of Ouliposaliva deals in repetitive drones and simple chord progressions over which the other instruments provide melodic focus. How much input did the other musicians have on their own parts? Was it meticulously planned by you?
The strings and flutes were. The string players in the Hiddentracks have an academic background, so they expected me to be directive, and provide them with accurate instructions and written parts. The brass and woodwind players are the opposite: I would give them general directions about the atmospheres of the songs, and about the possible ‘becomings’ of their sounds, then they would start improvising on the melodic frames of the songs.

I like mixing these two different ways of working. Paradox can be productive. The one thing all of us were obsessed with throughout the recording of the album, tough, was storytelling. Before anyone recorded their part, Francis (the saxophone player) would say: “make sure you’re telling a story!”

On In Purdah you speak of war-like thoughts building slowly in your mind. What drives these thoughts?
In purdah’s theme of a character willing to be emancipated from his creator was inspired by Paul Auster. Once a novel is finished, where do all the protagonists go? I picture this one on a desert island, hoping his turn will come again, and trying to keep fit meanwhile. But his patience has limits… hence the violent thoughts.

As well as In Purdah, several songs on the album speak of aggression (I’m Trying To Fit, the social conflicts in Kids etc.) in many forms, be they physical or in thought. Why do you think this is? Were there any particular aspects of life that drove you to write about these aggressions?
A friend of mine recently told me: “All your songs are about fighting”. I think he had a point! I write many songs on conflicts and wars, notably the Israeli-Palestinian one, which I read a lot about. It is a fascinating, inspiring, and very sad subject. Amateur psychology would suggest this is related to the father-son continuous conflict I had to live through in my own childhood. Not totally wrong.

There are three breezy anchor-points in the record, the Do Not Think tracks. What function do they serve for the shape and flow of the whole album?
Do not think was supposed to be in one part to start with; recording it in three different pieces came to my mind during the recording sessions, as a reference to the B side of Abbey Road, which I listened to a lot while writing the album.

As well as these three, the two You Most tracks provide another familiar thematic device throughout. Was there a danger that these linking tracks could have impeded the pace of the record?
Yes there was, we did discuss it with Gilles and Gérald of We Are Unique Records (who produced the album). We all agreed it didn’t, as the first two versions of You most are quite short. I really wanted both to appear – the idea was to show that a song is never over. I often compare songwriting and flower arrangement (the French word ‘composition’ is used for both): it all depends on how you coordinate the elements.

Now that the record is completed, do you see it as a success? Did you achieve what you set out to do?
All Hiddentracks do, indeed! We are very proud of what we did. What I wanted was Ouliposaliva to sound like a collective piece of work, like a jazz record. I hope this is the case.

What sort of record will you tackle next? Will you pursue a different kind of concept or a more traditional structure?
I already have the guiding concept of Angil’s next album: I am writing boy-girl duets. Each song will feature a different guest. I’ve written 10 songs or so. Meanwhile, we’ll be releasing the first album of a side-project we recently created with 3 friends of mine. It is called Jerri.