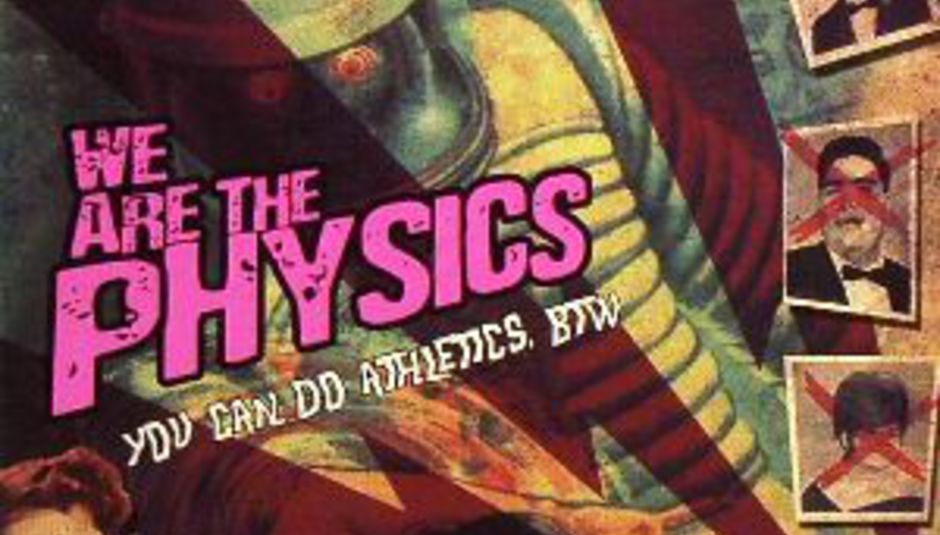 We Are The Physics – ‘You Can Do Athletics, BTW’ (DIY)
As seen on the DiS stage at the weekend’s Camden Crawl, Scottish four-piece We Are The Physics stab wildly at the Devo songbook, leaving its bloody entrails wrapped around yelp-along post-punk riffs – jerky, of course – guaranteed to please ADHD kids sporting oversized NHS specs… and fans of Maximo Park and The Futureheads. And us, actually: this is heavy and catchy as ‘heavy’ and ‘catchy’ pop gets without being Busted, and even has a brilliant all-clap-together part and what sounds like a join-in chant of their own band’s name towards the end. Awesome, then, basically. And three of them are called Michael. Winner.

Video: ‘You Can Do Athletics, BTW’

Beth Rowley – ‘Oh My Life (Blue Thumb/Universal)
A neatly swinging single from Bristol Voice-in-Waiting Beth Rowley that suggests that she’ll get a fair crack at the mainstream/Tesco-aisle top ten once Duffy slips from the public’s palate; she’s a softer voice that’ll sit pretty on daytime Radio 2. Potentially massive, then, and while barely registering on the revolutionary scale, ‘Oh My Life’ is pretty enough to tolerate. Nice sax solo, too. Not enough of those in the charts.

Speck Mountain – ‘Hey Moon’ (Peacefrog)
Built around a gently undulating guitar motif and Marie-Claire Balabanian’s haunting vocal refrains, ‘Hey Moon’ is the first single to be lifted from Speck Mountain’s recent debut, a mildly transfixing affair that sounds like Spiritualized and Mazzy Star mainlining Night Nurse in national parks, but whose low-circling beauty would nonetheless benefit from a good spadeful of grit to lift it into the realms of the truly special. AD

Adele – ‘Cold Shoulder’ (XL)
It’s the one that Mark Ronson did; it sounds like the one that Mark Ronson did. And a little like (A LITTLE LIKE?!) Massive Attack, at the beginning, sped up, a bit (A BIT?!). With that “New Queen of British Soul” over the top. So: one of the better tracks from Adele’s 19 album (review), but the last decent single on show on its parent long-player unless remixes come into the equation. Where next for the BRIT-schooled Londoner after this breezy lift of ‘Unfinished Sympathy’? Crack seemed to work for Winehouse…

The Shortwave Set – ‘No Social’ (Wall of Sound)
A weird air of ‘60s kitsch hangs heavy over this oddity from south London trio The Shortwave Set; even weirder given the alleged involvement of Danger Mouse, John Cale and Van Dyke Parks in its recording. “Everyone knows that a dog dressed in clothes is still a dog,” they sing cheerily, and somehow, it would seem awfully rude to disagree. The B-side, ‘White Lies’, sounds like Sparks doing Ace Of Base. Curiouser and curiouser... AD

The Flies – ‘The Temptress’ (No Carbon)
Apparently some of The Flies’ entourage have been working on the soundtrack for the new series of ITV cop show Wire In The Blood, which should come as no surprise – ‘The Temptress’ sounds like The Jungle Book’s dastardly serpent Kaa leading Tom Waits’ backing band through a crackling mambo rendition of ‘Trust In Me’, which in turn sounds a lot like The Wire’s theme tune, series one. Altogether now: “when you walk in the gaah-duhn...” Ahem. AD

Cut Copy – ‘Lights & Music’ (Modular/Island)
That Cut Copy’s new single will draw endless comparison to New Order should come as no surprise to anyone who has managed to hear the new album yet (In Ghost Colours is officially released next Monday). Here the Australian trio sound like ‘True Faith’ with cheap hair gel in its eyes - synths pulse, loyal drums race on programmed as sweaty and tight as Roger Black’s jockstrap, vocalist Dan Whitford intones dolefully re: lights, music, crystal, tears over a song more solidly built than anything Bernard Sumner ever leant his voice to. All in all, ‘Lights & Music’ is a better than decent slab of dance-rock, a soft-focus post-yuppy daydream involving cocktails and jubilant cat-hair. And jubilant cat-hair’s gonna be big this summer. KK

David Cronenborg’s Wife – ‘My Best Friend’s Going Out With a Girl I Like’ (Blang)
“When you told me on the phone, oh my God, the shock/What’s come between us is a big, fat cock”. What’s immediately impressive about David Cronenborg’s Wife is their honesty. Lyrics like those above float all the way through this magnificently-titled single, which musically sounds like Lou Reed hupping darkly over The Buzzcocks’ most famous song while Dan Treacy sits alarmed in the corner, wondering why on earth he didn’t write songs as good as this for the last two TV Personalities records. Cynics will point to the drug problems and the subsequent years spent aboard a prison boat off the Dorset coast, but the B-side here is named for a 129,000-ton oil tanker and besides, the A shares Clinic’s bitter-gummed, maniac glee. KK

Cats in Paris – ‘Foxes’ (aA)
Foxes should be celebrated – they are fantastically versatile animals and canny with it, as such spreading their vulpine seed across five of the earth’s seven continents and territories as diverse as the Australian outback and the Arctic tundra. Cats in Paris are similarly adaptable, it seems, cooing their way through xylophonic Deerhoof plink-plonk before synths billow up, giddy as Muse. Munch Munch would be another name you might wanna toss into the vat of sound, though theirs is a more maddened howl, more din than den and ‘Foxes’, while similar in many ways, is not as good a song as ‘Wedding’. KK

Pendulum - ‘Propane Nightmares’ (Ear Storm/Warner Bros.)
Leaping into the abyss, Antipodeans Pendulum join Enter Shikari in offering up turgid rock interspersed with run-of-the-mill jungle. ‘Propane Nightmares’’s relentless peaks and troughs make it seem like a sickening D‘n’B theme for a Wurlitzer with some oaf barking out whether you want to go faster. SS


Empty-headed feel-good brass-banded Motown-aspiring bawls are all well and good but they all seem to be struggling with that same Gnarls Barkley pastiche issue of seeming straight out a comic book image of 1967. Difficult to expect much else from Winehouse’s Brooklyn-based backing band, mind. SS

Broken Records – ‘If The News Makes You Sad, Don’t Watch It’ (Young Turks)
Scotland’s Broken Records’ first single proper will be oh-so familiar to anyone who’s caught them live over the past six months or so, or who’s picked up their demo EP at a show or online, but newcomers are in for a treat: this is sweeping Arcade Fire-like extravagance, played out masterfully by musicians clearly on top of their game. It’s a little too tightly tied to its influences – hear also: Beirut, Dirty Three – to mark its makers out as a truly important act in the making just yet, but if their material develops its own voice from here Broken Records will do very well indeed, thank you. ‘If The News…’ could be worth a mint before long.

The Envy Corps – ‘Story Problem’ (Mercury)
A nice introduction to a delayed but acclaimed album, Dwell (review), ‘Story Problem’ howls and twangs and smacks-its-thighs in all the right places, ticking these For Fans Of boxes: Broken Social Scene, Midlake, O’Death, Wolf Parade, you get the idea.

Wildbirds & Peacedrums – ‘Doubt/Hope’ (Leaf)
Get past the barrier that is love-or-loathe-toned vocalist Mariam Wallentin and you’ll find percussive thrills aplenty in this standalone from Wildbirds & Peacedrums’ debut album, Heartcore. Not to be confused with Ville Valo’s Heartagram, obviously: HIM fans are unlikely to get much out of this two-piece scorched-soul outfit, whose stripped-back approach cuts close enough to the bone to almost be pleasurable.

Casiotone For The Painfully Alone - ‘Ice Cream Truck’ (from Town Topic EP) (OIB)
If ever someone steals a Mr Whippy van only to then career it round town singing morosely to the Tanoy ditties playing out, I want Owen Ashworth to soundtrack it. He has, on the opening track to Town Topic. Listen, just don’t buy any Mini Milks from this jerk, kids. SS

Tokyo Police Club – ‘Tessellate’ (Memphis Industries)
Perky punk-pop from Canadian upstarts Tokyo Police Club that’ll no doubt be a gem to bop to down Koko on a Friday night, but in the cold confines of the DiS office merely bounces about the walls without getting us… bouncy. Not quite as immediate as the singles from mini-album A Lesson In Crime (review) then, but still worthy of a welcome-back back-slap and smiles all round in anticipation of something slightly more sole-grabbing next time out.

Who Owns Death TV – ‘Cathode’ (self-release)
Brighton four-piece Who Owns Death TV introduce themselves to selected record store shelves with a seven-inch that begins to make good on promise shown at their few live outings so far, one of which was a well-received slot at March’s DiScover Club, London. Featuring a pair of former Million Dead members, it’s hard to imagine this lot not getting coverage in the rock press, and fans should flock quite freely if the slickness beginning to creep through their solid and muscular pop-rock is polished a little more. A decent beginning to what might blossom into a beautiful career.

Epideme – ‘000-0’ / ‘Threatenings’ (Jonson Family)
Crunched-up riffs and gruff shout outs make this a no-brainer purchase for those into the hardcore end of the alternative rock spectrum, as Brighton’s Epideme recall the much-missed Kill Yourself in terms of their focused squall and squealing guitars. Like fellow south-coasters Charlottefield they’re never going to cross over to wider audiences with confrontational noise like this, but just like the aforementioned Fat Cat-signed act they’ve a ready-made listener group likely to lap this up.

Make Model - 'The LSB' (EMI)
Glasgow six-piece Make Model sound like Pavement turned inside out into something vaguely resembling a chart-aspirational act, and it’s almost like there are two songs going on at the same time here; one that’s given to lurching time signatures and generally making a guitar-driven racket, and the poppier beast evidenced in the boy/girl vocals of the admittedly quite-pizzazz-y chorus. As a whole, though, I’m not sure whose boat this is floating especially.

iLiKETRAiNS – ‘We Go Hunting’ (Beggars Banquet)
How do Leeds-based five-piece iLiKETRAiNS always manage to sound so perfectly moribund, like they’re soundtracking the ending of, well, everything; this, the latest single from their Elegies To Lessons Learnt LP, is released to coincide with a full-length animated feature rendering said album visually, and while I’m yet to see it the imagination plays familiar tricks. Dark, morose, skin-prickling during its highs, this is music for an undertakers’ disco, the unravelling of mortality and the subsequent spiralling into an inescapable mire.

Out next week: some more singles, some of which will, no doubt, feature in next Monday’s round-up. If yours isn’t here it’s either a) completely without merit or b) we missed it… sorry.