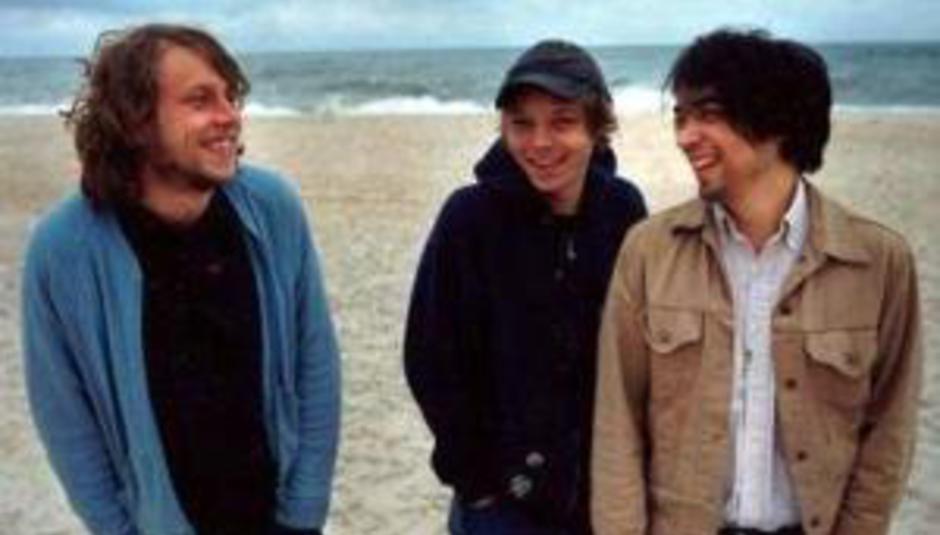 Load Blown’s hiccups of frenzied beats competing for space are a long way from home for Brooklyn noise cadets Black Dice. As its lethargic rhythms rub up against frenetic gabba, the 2007 release (review) is a sonic wash of discarded pop hooks boiled down to form a sickening soup, a broth of maddened party tracks far removed from their initial post-hardcore incarnation.

We might have been over some of this before, but, fully formed in 1999, like a chrysalis opening up to reveal no beautiful butterfly cocooned away but a skanky moth, the act decided back in 2002 it was time for a change from their early manifestation of carnal hardcore – celebrated throughout the New York underground, releasing numerous limited 7”s and EPs on DIY imprints (particularly Mike Simonetti’s Troubleman) – by signing with DFA.

“When we started, the only labels that were even close to putting out what we were recording were hardcore labels. So for the first couple of years that anyone could even put out a 7” of ours was amazing. By the time we started doing stuff with Troubleman, [Simonetti] seemed a little more ambitious than other labels.

“The shows used to be a lot different and used to be really physically violent and just like bloody, fucked-up events. As soon as people came to the shows expecting that nobody wanted to put on a show. I feel that the direction we took musically was natural and marked us using the same fucked up sounds that our instruments were making when banging on them and then starting basing songs more around these abstract sounds rather than chord progressions.”

Under the wreckage a real pop sensibility exists to the experimentalists, FM influences being crammed in. As opposed to 2002’s ethereal soundscape Beaches & Canyons, Load Blown was a conscious effort by the outfit to harness more of a pop focus, a collection of tracks released as EPs in the 18 months leading up to its issuing as an LP proper.

“What we wanted to do was create something that read like a pop record in the sense that you could break it down into a series of singles.

“A Black Dice song could almost be any song – it could be a Kenny Rogers song – if you were able to zoom in close enough to a point where you weren’t seeing smooth bass, but where the frequencies were all of a sudden overtaking the song and the melody and becoming the keystone to the song. I feel our inspirations for everything are very much rooted in classic rock, or like television or shitty movies. I like the idea of taking elements of pop culture and mutating it because even when you’re referencing pop culture at least there is something people can identify with in one way as opposed to have your whole set being based around bondage or something that is so extreme it lacks a particular reference point.

“For us though, we still feel like a punk band. The way that we operate and the type of energy – whether it’s a band going nuts or the sounds – the notion of punk and its confrontation is something that remains central. The shows are always interesting because people are often unclear with what their role is in the room.”

And the one pop song Bjorn wishes Black Dice could have written?

“Something off the first three Os Mutantes albums. But then I’ll go back to my record collection and it might be like a Van Halen song. Somewhere in between. That’s our way.”

Rather than the previous off-shoot projects from the cohort (particularly brother Eric’s involvements with Animal Collective’s Dave Portner) being far more fanfare than final product, Eric released Hermaphrodite at the tail-end of 2007. Bjorn states this was “a big fuck you to people and helped me remind myself of why I got involved with music in the first place”.

It’s one of the few moments that Bjorn shows any genuine resent, by increasingly has a tendency to casually snap into rants regarding the way they’re often perceived. Copeland clearly finds that promoters expect the same rapturous adulation that their peers Animal Collective and Battles have picked up over the last year as an irritant, mentioning it throughout the interview and brings in the wider topic of whether they feel they’ve benefited from certain affiliations.

“I can’t tell really. Yes and no. I think that we’ve benefited a lot in just having people around us you understand and are supportive of what we are doing and the Animal Collective guys, Lightning Bolt, Wolf Eyes, those are all bands that I feel operate in an extremely honourable way. I got in some shitty conversation with a promoter the other evening because he seemed to think that because we’re friends with Animal Collective it’s the same thing and we’ll pull the same size crowds. We were around six years before they were a fucking band. That’s the only shit that drives me nuts, when they ask about our friends all the time. ‘Oh, what’s up with Panda Bear? You know Battles? What’s Gang Gang Dance like?’ They’re all great people and want to champion what they’re doing, but it’s difficult.”

With their own trademark bowel explosions, Black Dice have had to master their sound, with their peers in order to delve down the holes they’ve dug themselves. Again, from absolute calm, he’s briefly pent up as I mention mastering their signature sound.

“People get irate with our sound and, particularly sound guys (glances over to Cargo’s sound guy; we’re talking at the London venue) and some people just don’t understand that we had to learn our sound from scratch. The only way we figured out how to make our stuff was getting together with Lightning Bolt to work the same sound issues out. There was nobody to teach you, and it was liberating because you make your own standards as you go along. The rock band is no longer the cool romantic idea it once was.”

Whilst this therapeutic session continues it seems suitable to ask how he perceives the way they are covered. Often, when writing about the Brooklyn scene, journalists have had their claws out with Black Dice, as if they’re the lame duck writers are willing to shoot off in order to validate the other acts.

“It’s frustrating. I do feel that happens. I guess I wish that those comments were based more on research. We share practise spaces and helped these bands start out so it gets annoying sometimes when you hear a band you know and you hear sounds that are familiar to when you were touring with them. But it’s more annoying with the promoters asking about why we haven’t sold as many tickets as Battles. I hope we don’t spend our whole career where people only understand what we did in retrospect, which has been the trajectory so far, writing a record and two albums later people really wanting to hear that record. There’s something nice about it but I don’t want to have to worry about not being able to pay rent. But I had Thurston Moore and Jim O’Rourke recently say how no-one would come to their shows and it made me realise.”

Having signed to Animal Collective’s imprint Paw Tracks after five years at DFA given this slightly bitter turn, conversation turns to their time at the hip New York label, where they stood out both as an act on the roster yet, though peripheral, encompassed the ideal DFA was pushing.

“In a lot of ways the label has changed a lot, particularly in its reputation abroad and the way it’s perceived outside of New York is different to the initial vibe when we got involved. They were into shit loads of music: crazy hardcore, Latin jazz, house, techno, fierce punk or whatever, and there did feel a lot of common ground at the time, and it was at a time that The Rapture were also making the switch and had also previously been on Gravity [influential San Diego independent]. At the time it wasn’t quite as etched out, there wasn’t that figurehead like James Murphy – I mean, he was there, but he was all talk as nothing had really happened yet.

“But it was a pain in the arse dealing with EMI and Astralwerks because we just wanted to put music out. The labels are never as adventurous as the bands. We were a nightmare for them. You couldn’t even play the videos because of the epilepsy warnings. I just thought they should market it as some anarchists’ cookbook. People get surprisingly conservative when there’s so much money on the table.”

But standing out as their own baffling procession, the act are far from an obvious outfit to market.

“If we like a band like Bloc Party or some shit like that, where there’s some already very established formula to package it... It’s not that we’re not into that music but it’s like if a band references The Who, it seems stupid to look exactly like The Who and act like The Who and do the same drugs. To me that seems boring, it ignores the specifics that made that initially significant and on the whole just seems contrived. I like the way artists choose to present their music, the way that Parliament or Funkadelic who were a funk band but presenting it as acid rock to gain the audience.”

Getting worked up again, we close on a lighter note: what’s the best environment to listen to Black Dice?

“Our friend Luomo apparently likes to listen to us with his baby when he’s giving him a bath.”

By all means follow these words of advice, just mind drowning in their suffocating soup of mind-numbing bleak beats.

NOTICE: we spoke to Bjorn Copeland, not Aaron Warren as previously stated. ‘pologies.