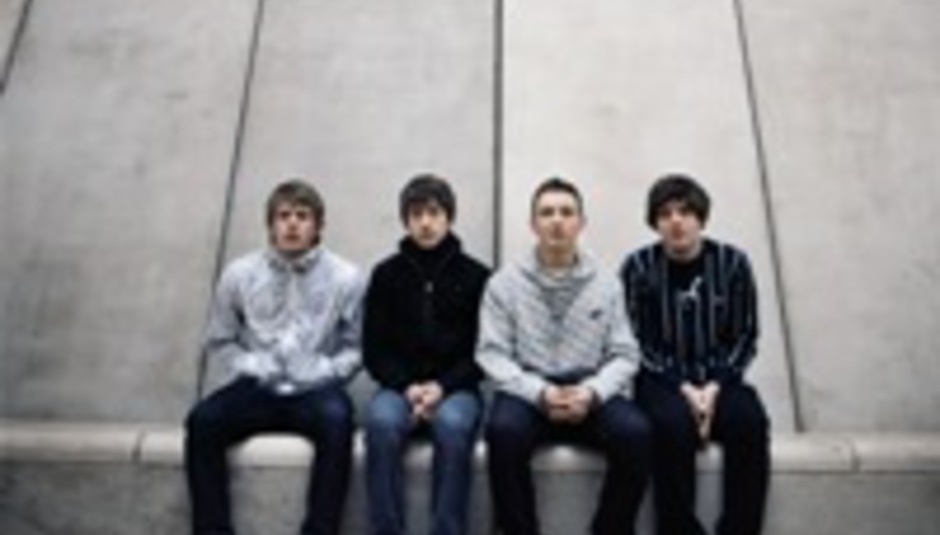 Arctic Monkeys didn’t, so why should you? Come to London, that is, to find your fortunes, bands of this land. The Sheffield foursome were finally made to put pen to paper by a soul of industry significance when Domino’s Lawrence Bell followed his nose north of Watford to meet ‘em on their own terms, following the band’s resistance to label approaches from the south, and was rewarded with signing one of the decade’s most successful domestic rock acts. Had they polished their game in the capital? Had they fuck: they’d toured all over, under their own steam, and learnt the ropes without interference from within the M25.

Yet London is, and has been for too many years for these grey hairs to total, the place to make or break your ragtag collectives of greasy-haired bass loons and quiet-at-the-back sticksmen. Or is it? It’s a cultural melting pot, for sure, with street-walkers from all corners of the world on any given weekday; but an identifiable scene, or sound, it lacks. Nu-rave? Started as a joke didn’t it, in the bowels of the beast that is the business; just happened that leeches sucked it up and reformed the Hoxton aesthetic into a movement capable of limping up the M1. Punk rock? Sure, London was its epicentre this side of the pond, but bands that led from the front weren’t always born Londoners – The Buzzcocks rolled down from Manchester, and… Okay, most were residents through and through. But by the time Sex Pistols blew the whole party into the mainstream in ’76 the sound had permeated metropolises worldwide.

London is a city without an identity nowadays, with too many bands after too few breaks too quickly for any sense of community to develop. So why do bands come here expecting to take things to the next level? Alongside Arctic Monkeys, Edinburgh’s Broken Records are another example of a band who’ve resisted the lure of London as long as possible – they made the industry come to them, until demand was such that they had to hop the gravy train southwards. The result is a single deal with Young Turks, an XL imprint, and inevitably greater things to come before the year is out.

Says the band’s Ian Turnbull, simply: “In somewhere like London there’s far too much happening and it’s difficult to get noticed.” True – from the perspective of the music journalist whose job it is to be instrumental in the exposing of brand new talent, there’s simply too much on of an evening to cut through the crap with any degree of accuracy. Also, the capital’s culture, the culture of the industry looking down on the populous from shiny towers in Kensington and Hammersmith, is prone to chewing up and spitting out acts when it suits them, another fact Broken Records appear to have been rightly wary of. Says the band’s Andy Kennedy:

“If you do something in London that’s a bit interesting you end up getting hyped and generate a bandwagon after four gigs when you’ve not had time to develop yourself. We’ve had countless gigs in the last year where no-one has noticed us and that’s given us time to get tighter and develop to the point where we’re ready to move on. So there’s no danger of someone saying to us, ‘Right that’s interesting, go and do this’. Then, all of a sudden… Destitute.”

Local scenes rich in community spirit and collective mindsets – progress through combined learning curves, collaborative gigging and recording – has in the past produced some of this nation’s greatest outfits. Bristol has spawned the likes of Tricky and Massive Attack, and to a similar extent Portishead, whose Geoff Barrow says of his hometown’s scene:

“The (Bristol) sound to me is where punk meets hip-hop and reggae, like The Pop Group and early Massive Attack, and Smith & Mighty. Tricky was absolutely that – he was more a punk than a rapper.”

These significant acts may not have made it out of their own ghettos without the spirit that courses through their earliest material, the sounds that ultimately got them noticed by capital dwellers without needing to relocate. Not every local scene is healthy though, of course, as Thomas Wagstaff of Birmingham punks Beestung Lips recently observed:

“There is a lot of dross that you have to wade through. It seems that the younger section of the Birmingham scene want to listen to ironic dance music and get off their faces on pills. And to be honest with you I’d rather do the same thing than face another lacklustre gig at the Dog and Trumpet. Live music and music in general is dying because people are trying to do things the industry’s way. People should kick back and spit in the face of the shiny equipment and pay-to-play attitude of the industry. Too many bands are prepared to jump through hoops like performing monkeys. We are not performers.”

Vitriolic words, but with good reason: a handful of bands are realising that subscribing to accustomed routes – accustomed through repetition rather than any persistently proven methodology to the madness – isn’t likely to benefit their progress. Stateside, local scenes are more obviously prevalent due to distances dividing settlements of truly sizable populations, something Be Your Own Pet’s Jonas Stein alludes to:

“There was a really good hardcore scene (in Nashville). DIY hardcore bands. These awesome bands came through (venue Guido’s Pizza) with small numbers of dedicated fans and we were the youngest ones there - 13, 14, 15 - and we used to hang around with people in their mid-to-late 20s, early 30s. So we were exposed to this hardcore party environment ‘cause they would still sell beer there, everyone would get shit-faced except for the kids. It’d be us getting in the mosh-pit with these 30-year-old dudes. I think that was very important ‘cause at that age you’re very impressionable and we were lucky to be exposed to that and the four of us understood and bonded with that type of music. I think you can hear the influence from Guido’s Pizza still in there today.”

There’s no shame in adopting a magpie approach to widen personal creative horizons, but the UK has enjoyed its share of local scenes bearing usually press-determined nomenclatures – Madchester, shoegaze (perhaps more of a national thing than limited to a specific region), trip-hop, Grebo (ergh) – and continues to with the (albeit not press-named) ‘Bosspop’ movement currently coming out of Liverpool, headed by bands like Elle S'appelle – read Kenn Taylor’s investigation into the city’s present scene here. But occasionally peeps are partial to diving into the deep end a little too swiftly, as was the case with the clumping together of relative randoms to establish ‘Thamesbeat’. One act caught up was The Maccabees, whose Orlando Weeks has said:

“Thamesbeat – the only ridiculous thing with that was when people tried to give it a name…Mystery Jets, Jamie T – some of the best bands in the land came from that, but it wasn’t that together, more just a bunch of people we met along the way.”

Not a strict community then, more some critically-approved artists placed in a temporarily convenient box for the sake of running them on the same page. See also: shit-gaze, and its associating of Eat Skull and Times New Viking with Psychedelic Horseshit. Oh, no, wait.

The point? Got lost somewhere up there, so let’s skip to the start again: if Arctic Monkeys have proven that you don’t need to move to London to make your band your living, and Broken Records looking likely to follow them, just why do so many bands up sticks to bum around Hackney bedsits ‘til it’s 10pm and they can play six songs to eleven people over at whatever shitty bar’s made itself a nice flyer this week? (Or are these examples true rarities; is the industry full of lazy fatties who can only shuffle as far as the Water Rats once a week?)

Are local British scenes still affluent, or has the spread of social networking sites such as MySpace rendered these geographically-bracketed collectives redundant, as movements can spread faster and wider than ever before? Where are the local scene salvations, the acts sticking to their creative guns and equalling a powerful artistic influence on the up-and-comers about them? Those that have made their cities their own. The Courteeners? Perhaps, perhaps. But they’re shite, innit.

Ultimately, will a band like The Ape-Shits ever make it outta Austin, Texas with a name like that?!