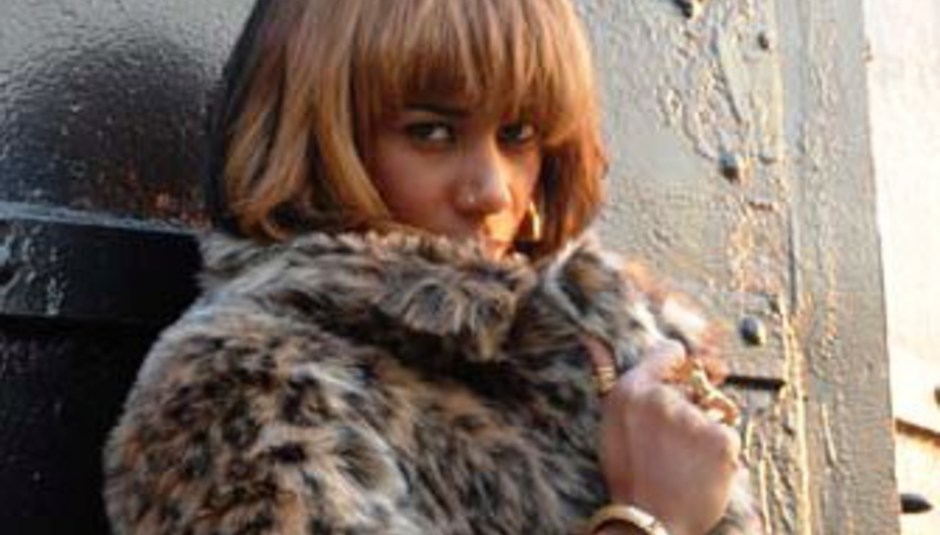 Some, when writing their debut records, are forced to degrade themselves, lower to standards far below their heady expectations. Some, though, call in Diplo, Switch, FreQ Nasty, Radioclit, Sinden, M.I.A., Trouble Andrew, Clifford ‘Moonie’ Pusey (Steel Pulse), Chuck Treece (Bad Brains) and XXXchange and Naeem Juwan (Spank Rock) to help out.

It’s not a bad list of production contributors and cred-bolstering guest appearances to assemble for your debut foray, but then with Santogold, arguably pop’s new princess, it seems a case of them being as eager to work with her as her calling on favours from her long haul in the industry (she was an A&R gremlin for Epic before ploughing her own musical furrows with her new-wave cadets Stiffed and writing for US R&B chart-fodder Res).

Derided and admired in equal amounts for the similarities between her lead single, ‘Creator’, and the brittle lo-fi of M.I.A. (the track is now used to advertise hair gel over here and Budweiser in the US), it’s new-wave juggernaut ‘L.E.S. Artistes’ that instead provides a more suitable portrait of the artist known to her mother as Santi White. Hailing from Brooklyn-through-Philadelphia, her pop hooks are just as reminiscent of the dappy hair-braid twirling of Cyndi Lauper as they are M.I.A.’s gallivanting beats. After the initial wave of press to shroud her in a cloak of vague importance at the turn of the year, a crusty eye has been kept out for what her eponymous debut would offer up.

We met up to find out whether debut album Santogold was worth dusting that sleep away for. Despite being from Brooklyn you’ve been here a fair few times now. Have you targeted the UK as a place to showcase yourself?

I feel very comfortable being here musically because I feel that this project has grown from two places at once from the beginning. Early on I was working with British producers – well, Switch and Radioclit – and my original label, Lizard King, has more of a British presence. And I was working with Mark Ronson who was doing a lot of touring over here and there was a lot of stuff that was UK-based that I was doing at the time, even before I had put together than a couple of songs there was more of a buzz here because of the people I had been working with over here. I had performed in Fabric before I performed anywhere else, and that was because of Switch and Sinden, who had done a remix for one of my first songs, so there seemed more of a hype here than in New York.

Do you feel people like Switch have given you a blueprint to work round and possess the audience that you are most likely to immediately appeal to?

Yes and no. I think that my record has a lot more than just that element – the programmed electronic element. That is only a small fragment of what my record is, though I would say that that element was obvious from the tracks up on the MySpace, so a lot of the initial buzz was from real music-head people asking “Switch: what is he doing next?”. As more people hear other material that is leaking they seem to be realising that a lot of the record is inspired by new-wave and dub.

Bringing her up early here, but M.I.A. has often suffered criticism for having such a broad range of influences that it seems a hollow picking. You seem eager to show your range, but do you feel that covering so many bases can detract from having anything particular to say?

It’s not a neat box. I was worried at the beginning that it might be a problem, but it hasn’t been. I think it’s just on time because people are getting really bored of things being so the same, and fitting into these pre-fabricated genre boxes; right now it’s how it used to be in the early ‘90s when you used to get all kinds of music because people are just done with it, and the industry is falling apart, and the internet makes it a fair playground. People are like, “Fuck it, I’m going to do what I want”, and people are excited about it. Part of the reason I have got so much attention is probably due to the fact I’m difficult to put into a certain genre.

At the same time though, you’ve presumably read enough of your press to be wary of – having worked with Diplo – as being typecast as nothing more than an identikit M.I.A.?

No, I don’t at all and I think that the press has got a little ahead of itself considering that they haven’t heard that much music. That’s one of the reasons why I’m so excited for the record to be coming out. Diplo worked on two tracks, y’know, and press are going to be putting their foot in their mouths with the M.I.A. comparison when the record comes out because it is so different. In terms of press I don’t get mad at it because I realise that people need a reference point and I think that on the outside that is a good one.

There could be far worse…

Yeah. She’s cool, she’s my friend. We’ve worked with some of the same people and both are brown girls who aren’t just doing and R‘n’B or rap, but have similar influences. But the way we go around implementing those influences are very different, and I am in no way influenced by what the press are saying. I’m excited that most of it has being good and supportive, but I’m confident of what the record is and I don’t feel it will be pigeonholed because it doesn’t fit.

I think part of the reason people like Switch and Diplo have been excited to work on it is because it is actually outside the box of what they do and people are going to be surprised at them because it’s not what they’re usually behind. John [Hill, former Stiffed bassist] and I brought them in on the live stuff and it’s been great for everyone to find out what our limitations are and though John and I were comfortable with live instruments, they’re not and so this project has been putting people out of their comfort zones and seeing what happens.

Do you have a grand live show planned?

Well, it actually all started out as a live show. The first couple of shows I did were with Architecture In Helsinki and we did it with a full live band, doing four dates with them and then three shows with Björk with a live band and then Diplo joined in doing sound effects and then, for ‘Creator’ and ‘Unstoppable’, he DJed at the end. That end is difficult because you’re working with a limited budget so I’ve got to figure out how to get round not having a band for monetary reasons at the beginning and then for bigger shows I get a live band but still have to figure out how to tie in digital tracks with a live band, so what we did was get the band to digitally replay tracks.

That’s the challenge, for sure. But what we tried to do was to keep the electronic element so had a drummer playing drum pads and it’s close to replicating how it sounds on record. I’ve got a DJ and two dancers at the moment.

Do you enjoy live performances? Are you an exhibitionist of sorts?

I love having the dancers, because they’re so fucking amazing. They take so much pressure off of me because the music is different to how my other band Stiffed were with so much energy and the singing was a lot easier whereas these songs are far more difficult to sing making it a lot more difficult to jump around, but without a band it can get dull if I’m not. So the dancers free me up with what is more S1W-styled dancers and has become a really interesting element to the performance. In the mean time, while there’s no band, they’re awesome.

Presumably you consider this more of a solo venture than your work with Stiffed?

Well, Stiffed (MySpace) was really my project too. The members of the band changed and it started out as just me. It was different though. I never wanted to be a performer and I feel as if I have grown into it because really my desire to make music has pushed me into doing everything. I never wanted to be a star and the motivation was always the music, so I find myself doing this solo and I need all the experience that I could get to do it because it wasn’t motivated by this need to be onstage, so I’ve had to grow into that.

We don’t know that much about the forthcoming self-titled record. You seem to think it’s got an eclectic focus, with ‘80s synth-pop as crucial an influence as any other…

I think that I write pop songs as far as song structure and writing hooks goes, but I like to put in a context that is interesting. So, I felt that a lot of pop music from the ‘80s had a depth to it, and I hope to bring back some more good pop songs. It goes from songs like ‘Lights Out’, which sounds close to the Pixies, to ‘Creator’, which is on the other side of the spectrum, programmed. Then there’s all kind of stuff. Vocally I’ve really pushed myself and tried to use my voice as an instrument rather than having a style that I use right through, so it takes the record to different places, which is the job of a record.

You seem to value creative freedom. Did you have a degree of freedom on Lizard King, and why move to Atlantic?

Lizard King didn’t allow me any freedoms. The label was a joke and I’ll say that on the record. They weren’t involved at all and pretty much got in the way.

So, Atlantic stepped up. I’m signed to Downtown in the States and that’s an indie, though it’s got major money. Me, Spank Rock, Justice and Gnarls Barkley. They let us do our own things whilst Atlantic, honestly, is exactly the same way, appreciating that I had got a lot going on and done a lot of it on my own and that I know what I’m doing, so keep doing what I’m doing. So, they’ve been very supportive and not really pushed anything on me.

So you don’t feel there is a pressure to fill a role as M.I.A.-lite?

No, because they got involved after the record was finished. Totally done. In fact, they were asking me not to change things when I had suggested I might alter a few bits. So it was far from the experience of them manipulating and instead pretty much approaching me and opening up the machine. In the long run it means more people will hear the record.

BUY?
Santogold is out on May 12, through Atlantic.