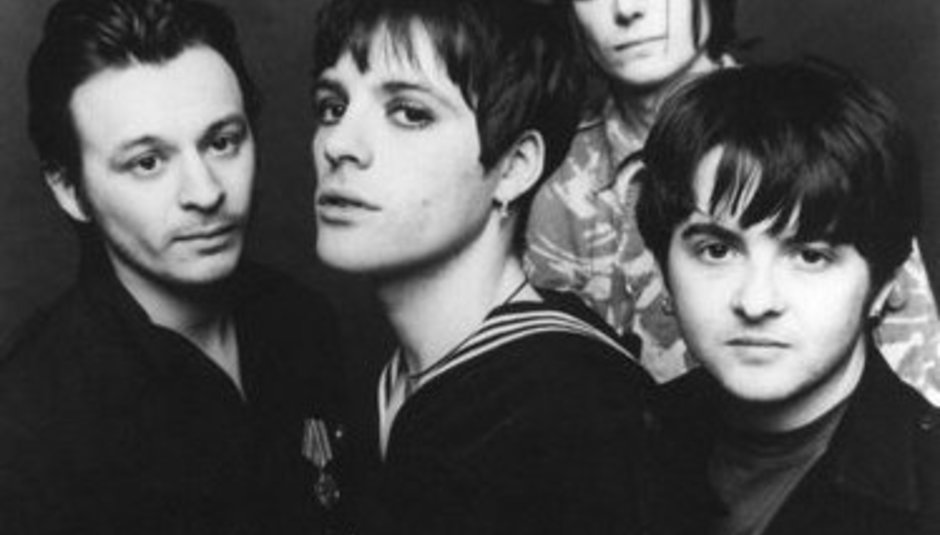 Discography reassessed: the Manics in perspective

Discography reassessed: the Manics in perspective

With the band recognised by NME as ‘Godlike Geniuses’ at their forthcoming annual awards, and a massive gig at the O2 in London looming, where they’ll be supported by a succession of today’s more prominent indie acts including Bloc Party and Kaiser Chiefs, DiS figured now was a good time to take another look at the catalogue of Welsh would-be legends Manic Street Preachers. So, that’s what we’ve done.

Just how do the feelings back then compare with listening anew in 2008? Is Generation Terrorists able to hold its own in a landscape sculpted by snippets on Skins and a closing slot on Tonight with Jonathan Ross? Will anyone care about The Holy Bible today as they did when it tore British rock a new arsehole back in ’94. See… The album that, as popular legend goes, was supposed to be the only Manics album and that would sell untold millions of copies as the sole artefact of band who existed in a brief, exultant flurry of creativity. Of course history had different ideas: pitched ambitiously as Guns N’ Roses meets The Clash, Generation Terrorists never launched the then-foursome into the stratosphere but it was undeniably impossible to ignore, if only because of column inches in the popular press that hailed Slowdive as being more worthy of hatred than Adolf Hitler.

Beloved of Manics fans, Generation Terrorists feels so dated now that it is hard to see the appeal unless you’re a young, angry, addled teenager. While the quality of classics – and they are classics, not simply through being overplayed but because they are shining examples of how to write arrogant and stunningly accomplished pop songs – such as ‘Motorcycle Emptiness’ and ‘Little Baby Nothing’ endures, the production roots the album firmly in the past and the shimmering guitars feel more like relics from the bad old days of the OTT ’80s than a first, violent broadside. If it was released today it’d be laughed out of contention in an instant even if ‘Stay Beautiful’ and ‘You Love Us’ still burst with sweaty excitement, but too many laboured statements along the lines of ‘Natwest-Barclays-Midlands-Lloyds’ prevent Generation Terrorists from holding any appeal to anyone who doesn’t already have a deep emotional connection with the songs themselves. Apparently following The Clash’s lead more closely than that of G’n’R, Gold Against The Soul was far more radio-friendly than could have been expected. The FM crunch of ‘Give ‘Em Enough Rope’ is the most obvious touchstone for comparison and this album signified the Manics’ most earnest attempt yet to try and crack the States. Understandably, it was roundly panned by large sectors of their fans and is described by Nicky Wire today as being a blip in their career.

It’s fair to say that history judged Gold… slightly unjustly. While it is the album that should, ideally, never have existed, the opening three tracks (the masterful triumvirate of ‘Sleepflower’, which since found an enthusiastic rebirth on recent Manics tours, ‘From Despair To Where’ and ‘La Tristesse Durera (Scream To A Sigh)’) remain just as potent as ever. Without any of the sometimes-clunky political / social commentary of its predecessor ‘Gold…’ is able to stand alone without much baggage, mainly because it still isn’t taken all that seriously. But when approached afresh – and in isolation – it’s definitely a strong album. It’s heavy, melodic and packed full of huge choruses: radio-friendly doesn’t have to be used in the pejorative sense and it’s certainly more considered and mature than their debut.

Video: ‘From Despair To Where’ It didn’t sell very well, but its impact was felt keenly by anyone who’d ever come into contact with the Manics. Heralded by their infamous and still-shocking performance on Top Of The Pops in what can only be described as terrorist-chic and the reprinting of the entire lyric sheet in the centre pages of NME, The Holy Bible was utterly unflinching. Hell, any album released on a major where the fourth word is “cunt” is going to turn some people on and some off.

Still a masterpiece. It’s taut, uncomfortable and deeply brutal, both in its lyrical content (anorexia / the holocaust, and those are just the songs where Richey’s lyrics are immediately understandable – the rest of the album deals with a nameless dread no person can ever envy) and its pinched, muscular riffs. Listen to it as a suicide note and you’re doing The Holy Bible an injustice; it’s the sound of one man in a close-knit group of friends slowly disintegrating and using his own anguish to create some of the most brilliant art to be released on a large scale as music in years. It’s pounding and relentless and extremely unsettling and deserves to be discovered in turn by every young, confused teenager. It’s not a suicide note; it’s a warning. Goodbye lyrics etched onto rough books, hello arena tours, Mondeo Man and critical acclaim from practically everyone, including the Brit award panel. And, of course, goodbye Richey. While Everything Must Go and its attendant singles ‘A Design For Life’ and the title track presented the new three-piece as more than a mawkish tribute act, it was hard to shake off the idea that the new bombastic and widescreen Manics were in some way mortgaging the memory of their lost friend.

Finally considered to be perhaps the quintessential Manics album by Nicky Wire himself, Everything Must Go is the album that allowed them to cast themselves as everymen, able to offer some small piece of solace those who wanted to sit in their bedrooms and recite the lyrics quietly to themselves (‘Small Black Flowers That Grow In The Sky’) right across to the rugby shirt-wearing masses who seemed to populate their gigs now and who wanted to just shout a bit (the chorus of ‘A Design For Life’ has since taken on an ironic quality). Polished but not too shiny and considered without being sterile, it’s a fine tribute not only to their absent friend but to the band they used to be. Put it on again and you’ll be surprised how emotive the sweeping strings and crashing Gibson chords can sound, even 12 years after its initial release.

Video: ‘A Design For Life’ The first album where Nicky Wire wrote all the lyrics and the moment it all started going wrong, according to most die-hards. Musically, ‘If You Tolerate This, Your Children Will Be Next’ and ‘The Everlasting’ felt like cynical attempts at attaining chart-humping success and, with much more orchestral production than ever before it was almost as if the Manics were trying to brush their past under the table.

An album without Richey’s actual input, but not an album free of his influence. Utterly unrepresented by the singles ‘Tsunami’ and ‘You Stole The Sun From My Heart’, two of the most forgettable songs the Manics have perhaps ever released, it’s actually a stately, tender lament to their past rather than an attempt to move on, strictly speaking. ‘My Little Empire’’s sub-GCSE poetry aside, the lyrics find Wire in a movingly vulnerable mood, quite unable to shoulder the burden alone of how large the Manics had become. While accusations that this is where their descent into Tesco-rock began aren’t exactly unfounded, to dismiss it out of hand does it a disservice. When James bellows “What is there to believe in?” it all becomes clear: they’re older, but no more content than in the past. Just as the Holy Bible was Richey’s, this is Nicky’s more than anything; confused where Richey was focused, afraid of loneliness while Richey embraced it. You can’t escape the idea that he almost feels guilty for what they’d turned into, and that imbues This Is My Truth, Tell Me Yours with a sadness and longing that wasn’t immediately evident on its initial release.

‘If You Tolerate This, Your Children Will Be Next’ Hopes were sky-high – this was supposed to be the Manics’ return to their vitriolic best, and considering how exciting it was when ‘The Masses Against The Classes’ hinted at their sixth album being more ‘You Love Us’ and less ‘The Everlasting’ the disappointment was huge. Releasing two singles on the same day proved to be an empty gimmick as the songs in question had less musical worth than your average Kooks gig, and the following Greatest Hits tour saw this album entirely glossed over.

No human being should ever listen to this album ever again. It’s the sound of three middle-aged men searching in the dark for some kind of meaning, as they attempt scratchy punk without any real anger (‘Intravenous Agnostic’), hilariously sub-Beach Boys melody (‘So Why So Sad’), hideously trite disco funk (‘Miss Europe Disco Dancer’) and, horror of horrors, letting Wire take lead vocals (‘Wattsville Blues’). It’s misfire after misfire and listening to it now only feels uncomfortable – you can practically taste their disappointment in becoming a band of ‘The Establishment’ and their idea of kicking against it was to present a poor facsimile of their past glories. Embarrassing. Snuck out with the minimum of fuss and their joint-lowest charting album ever, Lifeblood was almost the nail in the coffin. They said they were aiming for a detached, bleak album along the lines of Nebraska but instead ended up with little more than a couple of catchy song titles and a brief flurry of media interest when Wire kept blathering on about Richard Nixon. Again, like Know Your Enemy, it’s a rare occurrence for one of these songs to feature live.

It’s not the aberrance the previous album is, but nor is it a tenth as good as even This Is My Truth…. Familiar Manics lyrical territory is crossed with a song about Emily Pankhurst but the overarching feeling is one of discontentment bred by the enduring failure of Know Your Enemy. ‘I Live To Fall Asleep’ and ‘Empty Souls’ could, if they weren’t so sterile and impotent, be curios of a time when they tried a new musical direction but even when singing about Richey, as on ‘Cardiff Afterlife’, there’s no real drive or focus.

Video: ‘The Love Of Richard Nixon’ Or; Fuck You, We’re Doing This The Way It Should Be Done. Finally, heralded by a radio-friendly single that wasn’t utterly shit and the distinct possibility that they might just have pulled off a stunning comeback, the Manics leapt back into contention as a relevant band. James’ voice sounded like it was as strong as ever and Wire’s motormouth tendencies were firing on all cylinders as the common critical consent seemed to be that this was a return to ‘Everything Must Go’ form. And it was.

Far, far better than anyone had any right to hope for, it sees the Manics embracing their stadium status by writing a collection of dynamic, catchy rock songs that seemed tailor-made for summer festivals. It blows the previous two albums out of the water, not simply because they sound like they’re having fun again, but because they’re not trying to ignore their past. Just listen to the way Wire sings “I could’ve written all your lines” in ‘Your Love Alone…’ – it’s an acceptance of things past and their first real attempt at moving definitively on. And it helps that their choruses are back on form: ‘Underdogs’ and the unfairly derided ‘Autumnsong’ are as bold and gutsy as anything they’d done before.

Video: ‘Your Love Alone Is Not Enough’ featuring Nina Persson