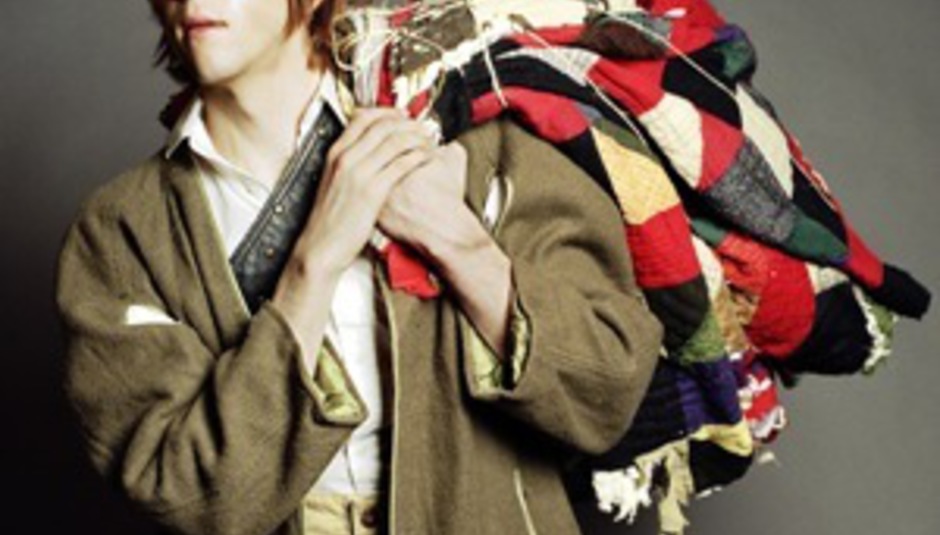 Final Fantasy’s Owen Pallett is a busy fellow. Not only has he released one of the most-acclaimed ‘out there’ releases of modern times, He Poos Clouds (review), but he’s been a member of Arcade Fire in a string composer role and recently worked with Arctic Monkeys’ Alex Turner in tandem with writing new solo material. This month, he’s curating a very special new festival: Maximum Black.

Latecomers, here is DiS’s first report on the three-city event, held in London, Berlin and Vienna. For those shy of clicking to other corners of DiS, the line-up for the London event (The Forum, February 29) reads as follows: Final Fantasy (d’uh), Six Organs Of Admittance, Dirty Projectors, Alexander Tucker and Stephen O’Malley duo, and Frog Eyes. Tickets are a sound sixteen pounds. Website: here.

The background to the festival’s pretty interesting, too. Taking its name from a song by Bohren & The Club of Gore (Owen’s a fan), the festival is 100 per cent funded by the Vienna Public Utility Company as an ‘apology’ of sorts for them using a re-recorded version of Final Fantasy’s ‘This Is The Dream Of Win & Regine’ in a television advertising campaign, without the correct permission. Now all arguments have been resolved without any messy lawsuits, and we’ve a lovely evening of excellent music to look forward to.

And Owen’s perfectly happy to tell DiS all about it…

Where in the world do you rest your head at the moment?
I'm in a tiny prison in the southernmost part of Toronto, right by the lake. It's very detached from the rest of the city. I hate it but I'm getting a lot of work done.

Can you tell us a bit about what you've been up to of late?
Writing new songs and recording some of them. Takes a lot of work, cranking out the stupid music I make. I don't have an assistant or a copyist or anything, so I just sit and write all day. One day I'll switch to something easier, like dancehall. My dancehall name is Legendary Dad. I've even designed my t-shirt. It's a drawing of I Roy and Selassie, by a lake. I am swimming in the lake, while they are being intimate with each other. It's very artful and romantic and I did it with a B pencil.
Also, I'm doing a surround sound looping setup. It's taking a lot of research into things that I don't know very much about... input impedance and line driving and MIDI controllers and boring stuff like that. Also, a lot of practise. So far so good, though... it's sounding like a million bucks.

Yourself and Alex Turner might appear to be the most likely of bedfellows, can you tell us a little about how that collaboration came about?
Laurence Bell from Domino Records contacted me and asked me if I'd meet Alex in Toronto. Alex and I met in the bar of his hotel, he bought me a cappuccino, then we took a cab to my southern Toronto prison and we listened to some David Axelrod records and talked about music. I listened to the tracks he'd recorded, and told him my ideas, and then I scored it out in a couple of weeks, I flew to London and conducted it with an orchestra. It was the most effortless project I've ever worked on.

How did recording with him turn out?
It's great. The record's great!

You were in Paris recently, right? What was your best experience in the capital of love?
Oh, usual banal things. Paris isn't the capital of love, it's the capital of the culture industry. It's is the best place for banal pleasures, like pants shopping, going to art galleries, looking at boyos and eating well. You know? It's so... conventional. They've completely eradicated all Bohemian influence. Which is okay, I guess. I'm a sucker for it, too. I'm saving up for a Rick Owens gym bag.
But I had a better time in Prague, where - at a normal university pub - a cute boy showed us his eczema (it was amazing!) and these other boys in a rad band called I Love 69 Pop Geju took off their clothes and sang a song about "the sweet tang of rape". Can you tell us a little bit about the mysterious legal circumstances surrounding the Maximum Black Festival?
Sure! The video production company that made a commercial for Wiener Stadtwerke asked if they could use a Final Fantasy song in their ad. I said no. They gave the song to an in-house guy who looped the instrumental intro and did a redo of the violin line and the vocals. The commercial premiered in cinemas around Vienna. The song was identified easily as being a rip-off and people started talking about it.
Not long after, I played a show in Vienna where I played the chopped-up version of the song and talked about what happened. People from the ad agency and from Wiener Stadtwerke were there, and they approached me after the show and we chatted and they were very apologetic. Needless to say, I had no interest in launching a lawsuit against a publicly-owned city works. We agreed that having them fund a music festival would be a good solution.
So: justice is served. The quality of life of the people of Vienna remains intact. (Perhaps even enhanced by The Dirty Projectors.)

What track were these suited ne’er-do-wells intending to use, and what was it promoting?
The song was ‘This Is The Dream Of Win & Regine’, that mouldy-oldie. The ad was, really, not all that interesting. CGI ribbons flying around while people used electricity and watched their garbage get picked up. Why does a city works need to have an ad, anyway?

Did you pop around their house in the dead of night with a threatening tone to your voice, or resort to the safer solicitors letters? Why did you decide to go for the festival curation rather than cold, hard, currency?
Unless my limbs get broken, lawsuits aren't my thing. I certainly don't file lawsuits against public works organisations, unless they've directly caused me distress. I'm far angrier at the Ontario Government right now for revoking my health card. I work abroad a lot of the time, and in their eyes, I'm not eligible for public health care. Isn't that crazy?

How did you go about choosing the acts?
My booking agent and I made a list of bands we liked, then we worked our way down it until the bill was full. There were some bands that I wanted and others she wanted that we couldn't get or fit in (Simon Bookish and Planningtorock for me, Isis and Cocorosie for her).

What are you most looking forward to about the shows? I can't wait until they're over, honestly. I'm playing in surround sound so I'm going to be a stress case until these shows are over. I'm just glad that I'll be playing with so many good bands to take the heat off me, in case my set is a disaster.
The surround sound thing made its debut in Dublin last year and an acquaintance of mine came up to me and told me that he'd seen me four times, and it was by far the worst show of the four. Ha!

Will there be a boogie-woogie jam session at the end of the night?
No, the venue has a curfew. Boom!

What other plans are there for Final Fantasy before the year is out?
I'm 95 per cent finished one EP and 60 per cent finished another, those will definitely be out before the fall. Maybe even in the next couple of months, we'll see. The new album is really starting to sound good, although all the songs are sounding really, really, really poppy, like a Stereolab record... and I don't know if I like it or not. Stereolab's poppy sound is always tempered by the drone and the beat and the semiotics-textbook lyrics. I don't have those things, I just have saccharine melodies and added seventh chords. But I've written fifteen songs for it already and I'm going to write a bunch more before I start recording, so we'll see what happens.

Did you know that OMD are reissuing Dazzle Ships? How excited does that make you?
Very excited. Best record ever! Take care Luke, see you soon.

Once again, read up on the Maximum Black festival here. Listen to and learn more about Final Fantasy here.