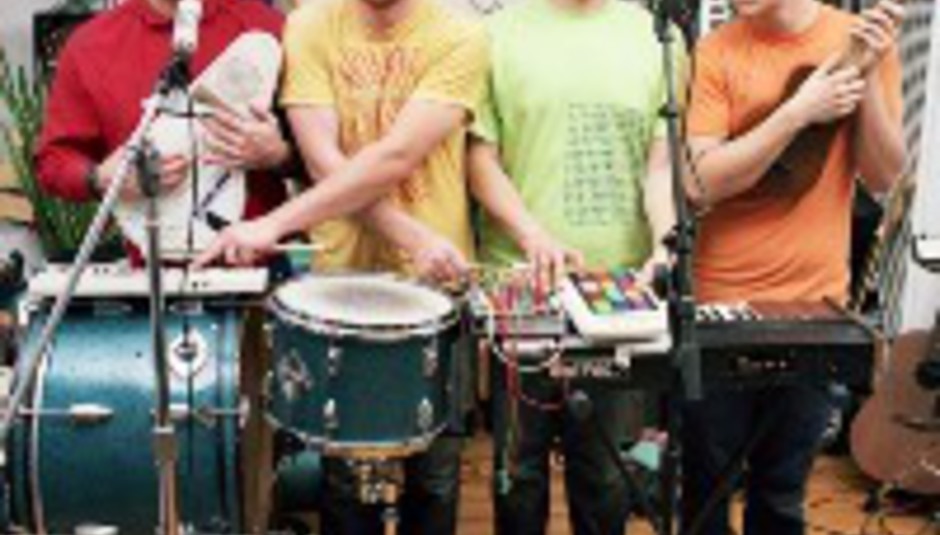 Los Angeles-based electronica-tinged experimental punk-rockers The Mae Shi are in town as of now; DiS caughrt them live on Tuesday night at the first of our Winter Warmer shows at London’s Barden’s Boudoir, and even after a couple of beers too many found their hyperactive rhythms – fractured and misshaped, yet truly toe-tappable – quite the something.

The band – Jeff Byron, Jonathan Gray, Bill Gray and Marcus Savino; founder member Tim Byron and drummer Brad Breeck continue to be involved, but not at a touring level – are playing a number of shows in the capital this week and next to drum up awareness of their debut album for Moshi Moshi, HLLLYH. The record’s their fourth, including a split long-player with Rapider Than Horsepower, and their first to earn a ‘proper’ release in the UK.

Taking inspiration from a variety of sources, including video games, the band’s approach to modern punk is quite unique amongst this year’s inevitable slew of math-rock-schooled jerk-riff merchants and post-Libs no-marks (be fair: there will be many, again). With HLLLYH looming on the horizon, DiS gets on the blower to the band, while they’re staying in Cardiff, to talk up the forthcoming LP.

Oh yeah? Cool. Listen, the first thing I want to ask might sound a bit silly, but still: how are you pronouncing that album title?
You know what? What I’m going to do is put Bill on the phone. He’s been playing bass in the band, and is technically the newest member of the band, but he’s been with us since we were, y’know, infants. He’ll answer these questions, and if you want to ask us anything specifically you can ask us those, too.

Alright?
I’m pretty good. The last few shows have been great, and we were really surprised with the crowd last night – we were told that it’s hard to predict how many people are going to some out on a Monday in Cardiff.

So, the album title. Am I meant to pronounce it ‘hell yeah’? Seems good.
Well, you could say ‘hell yeah’, you could say ‘halleluyah’. It’s really open to your own interpretation. I think, really… well, it’s not commentary, but the title definitely has links to gaming culture. For instance, there’s a videogame called (World Of) Warcraft, and it uses the word ‘pwnd’. We called a song that. It’s this whole invention of a culture – it may be completely accidental, but it’s a very real thing.

HLLLYH really brings the band’s electronic side to the forefront, especially on a song like ‘Kingdom Come’. Are their old-guard fans who’ll not take to this direction?
Um, I feel like it’s not come out of nowhere – if you listen to the other records, they’re leading up to this quite naturally. I’d say that we’ve fine-tuned the pop a little more, and we now feel really comfortable having a massive chorus. The electronic angle was there at the very beginning, though. If you look on (debut album) Terrorbird, the fourth song is a full-on techno jam. We have a house one, and then the crunkiest one you’ve ever heard. The third track has probably one of the loudest and dirtiest booty basses in punk rock, that I can think of anyway. There should always be room for booty bass.

Are you hopeful that newcomers to the band will check out your previous LPs? There’s certainly plenty of back catalogue for them to get stuck into…
We hope that newcomers will check out the first few albums – I didn’t play on them, but they’re some of my favourite records. Hanging out with the band at the time, well, that proved to be my inspiration for joining them, because I loved them so much. Some people are gonna like it, y’know, but some people won’t like the earlier stuff. I love it, but you can’t expect everyone to love what we do.

At this stage of the band’s career – on your fourth album – can you predict any particular level of critical feedback? Are you anticipating positivity, or is there scope for any backlash already?
I don’t think any artist anticipates any good reviews, or reviews that are written from a similar perspective – everyone’s perspective is going to be different. Some people will hear the electronic side and think we’ve made that particular type of record; others will heard a song like ‘Boys In The Attic’, which is a very kinda Mötley Crüe-inspired song, and think we’re a punk band. Nobody will feel the same way about it, and that’s kind of the point of the record in the first place.

And is it better to provoke a strong reaction, be it for better or worse?
Whenever you are making art, you want as strong a reaction as possible, be it positive or negative. At the same time, if someone’s just, “It’s whatever”, that’s fine – any reaction is good. Who’s to say what’s better than something else – there are no rules in this, and there never have been.

You’re really pimping yourself about London right now – what’s the thinking behind that? Travel costs? Do you want as many journalists as possible checking you out?
We understand that not everybody is going to be able to make it to the same show, and we really want a presence in London. We love the city, so to be able to hang out there for a long time and play as many shows as we can is great. We don’t expect people to come to a lot of the shows, to keep coming out to see us. But if people do want to see us five or six times they’re welcome!

And you’ll come back soon for a proper tour?
We will come back – there’s nothing booked yet but we’re talking about it. It’s nice to travel, and Europe’s one of the most amazing places in the world so we want to get out here as often as possible. Well, yes, some parts of Europe are nice!

To wrap up, how’d you come to land on the Moshi Moshi label?
Moshi Moshi introduced themselves at South By Southwest last year… ahhh… lemme give the phone back to Jeff, because he spoke to them more than I did. Hang on…

Moshi Moshi… South By… meeting…
Oh, yes. Yep, we met Stephen from the label at South By Southwest. We hadn’t gone there looking for a record company; we’d gone to have fun, basically, and to party and see a lot of other bands. We ended up meeting with a bunch of record labels, and the guys from Moshi Moshi were definitely the most pro-active – they wanted to get things moving as soon as possible. The album was already being recorded then, but you have to consider some things that are just different at American indie labels. The hands-off approach of a label, for instance. Kill Rock Stars – and 5RC – was a great label to be on, as you could always find someone to party with, and there was always some great way to associate ourselves with the label. We’re very proud to have been on the label, but at the same time they couldn’t put a lot of effort into working an album. With Moshi Moshi, they’re really only doing one album at a time.

It’s known as more of a singles label, I’d say, which possibly means they’re keen to make a proper impact with their albums, as they’re released fairly infrequently. (Note: after looking at their website Moshi have actually done far more albums than I’d realised, ranging from Mates of State to Hot Club De Paris via Au Revoir Simone… so go them!)
In some ways we don’t really know how Moshi Moshi compares to other UK or European labels – we don’t have the experience. We’ve released some records in Europe before, but that was on a level similar to the US – they’d put out the records and we could do whatever we wanted. Moshi are so laid back – there’s absolutely no stress. Well, they do work hard, and they’re making us work hard too! It’s a symbiotic relationship, as it should be.

Too right, hence all the shows. Well, ta for taking the time to speak to us…
No worries. One thing about Tim leaving – the idea of a member ‘leaving’ The Mae Shi is something we couldn’t ever conceive of, and we think of it as gaining a member. Bill has been with us forever. And he’s John’s cousin, so he’s in the family. Tim’s my brother, so it’s all very close-knit.

Find The Mae Shi on MySpace here. HLLLYH is released on February 11, and the single 'Run To Your Grave' is out now (review). Catch them live at the following places: