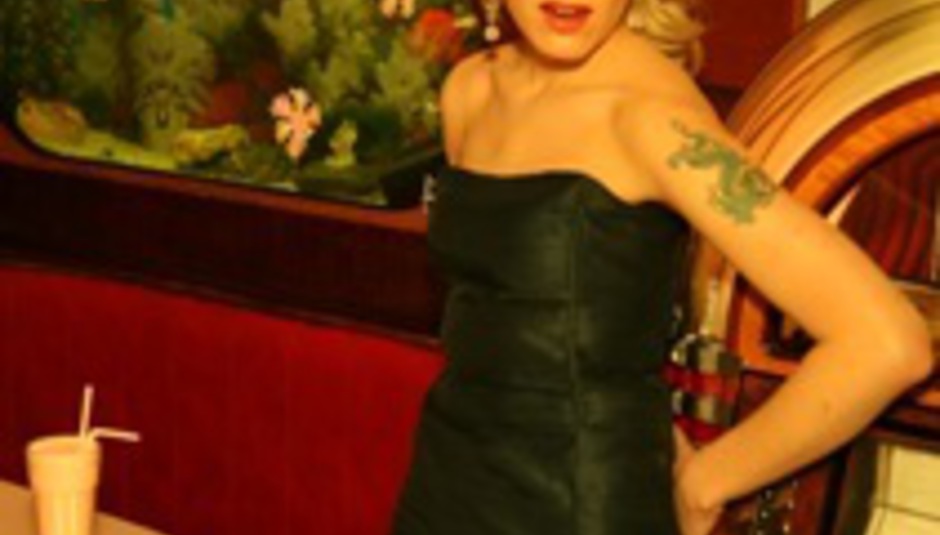 Evoking the genius of the post-punk era without hollow reiteration of its conceits is no mean feat, but it’s a trick Glasgow’s Michael Dracula manage niftily. In The Red, released last month on the legendary ZE Records, conjures up the inebriated ghosts of countless no-wave luminaries while retaining a lecherous charm all of its own. DiS gets the lowdown from the band’s brainchild Emily MacLaren.

You’ve had a number of line-up changes before arriving at this one, what’s the story there?

Well the first line-up was like Suicide or something, you know just a drum machine, guitars and singing, but then I got a bass player and a live drummer and it evolved from there. It’s kind of a revolving door thing, although I’ve got an amazing guitarist right now though who’s been playing with us for about a year.

Were you without a band at the time of recording for In The Red? Is the record a solo effort?

Pretty much, yeah. Ze had signed me based on some bedroom recordings I’d sent them and Michel (Esteban, head of ZE Records) wanted to keep the band as purely a live thing, so at that point I decided to leave Ze because I didn’t think it was right to tell the people in my group they couldn’t play on the recordings. We found another label but then we split after we got barred from our own gig.

We had this gig with a band called The Bravery and our keyboardist got really drunk… I don’t think the audience were quite ready for us, we got a lukewarm reaction and she threw Irn Bru over them, so they started chucking their pints at us which I thought was really funny at the time, and then it just escalated…

Throwing Irn Bru at people – a peculiarly Scottish form of abuse, no?

Yeah, we totally polarised the audience, half the people were cheering and encouraging us and the rest, well… at the end the staff just came over and said you’re barred, get out. After that the drummer and the bass player said right, we’re leaving. And that was the night before we were meant to come to London to record our first single.

Did the Irn Bru incident help precipitate your decision to record the album solo?

Yeah, at that point Michel contacted me again and he said do you want to come to France to work with this engineer that he had, Michel Bassignani, and that turned out probably to be the most productive musical relationship I’ve ever had. He’d worked as a musician’s assistant for years but had never engineered an album before, he just had the most amazing ideas about music.

Yeah, from the moment I met him and we just sat around drinking wine and discussing drum sounds on The Idiot, I just knew this was going to work. Neither of us had a clue what we were doing, we’d bark up a lot of wrong trees but we’d also experiment in ways that you’re not supposed to do and come out with really interesting sounds.

You seem to have some pretty strong ideas on production generally, and in particular you’ve expressed hate for the ‘democracy of sound’ favoured by many modern records. Presumably it’s a tyranny of sound you’re after, then?

Ha ha, I suppose hate is a strong word to use. But it’s like with those old Studio One seven inches, because the spaces they were recording in were so small and you’d have these huge bands playing all at once, there’d be like a piano player and a horn section out in the back garden. They sound like they’re coming from the next room and I like those kinds of textures.

You’ve already written songs for the next record – what new Influences can we expect to hear on that?

Well I think there’s a bit more… chords. It’s not like some kind of virtuosic prog rock odyssey or anything, I’ve just been playing around with the songwriting a bit more… that sounds really wanky. It’s difficult because I had so many ideas going into the last record and I didn’t really know what it was going to sound like when I wasn’t just playing it sitting round in a bedroom.

But you need something in the head to guide you and for the first album it was a film called Scorpio Rising. It’s one of my favourite films, it’s just the way you have these songs in the film which if you heard on their own you’d probably think they were insipid or saccharine but the way they were used made them really sinister and dark. Music that I really enjoy has got that kind of contradiction in it, like the sound of The Idiot is like having your head encased in concrete, it’s almost a showtunes sound in a dark sort of way.

You’re from Ohio originally – how did you find your way over these parts?

I moved over on an exchange program and just sort of got stuck there. I love Glasgow, it breeds people with a really dark sense of humour which I appreciate. I remember one magazine did this test years ago where they left a bicycle in city centres around the UK without a lock and timed how long it took someone to steal it, and Glasgow was straight in at number one. But then the next one they did was an old woman who slips and falls on a pavement and they timed how long it took someone to offer her help and Glasgow was number one again, like four seconds or something. That pretty well sums it up. They look after each other, you know if you’re an idiot and you leave your bicycle like that then you can kiss it goodbye…

In The Red (review) is available now on ZE Records. MySpace here.