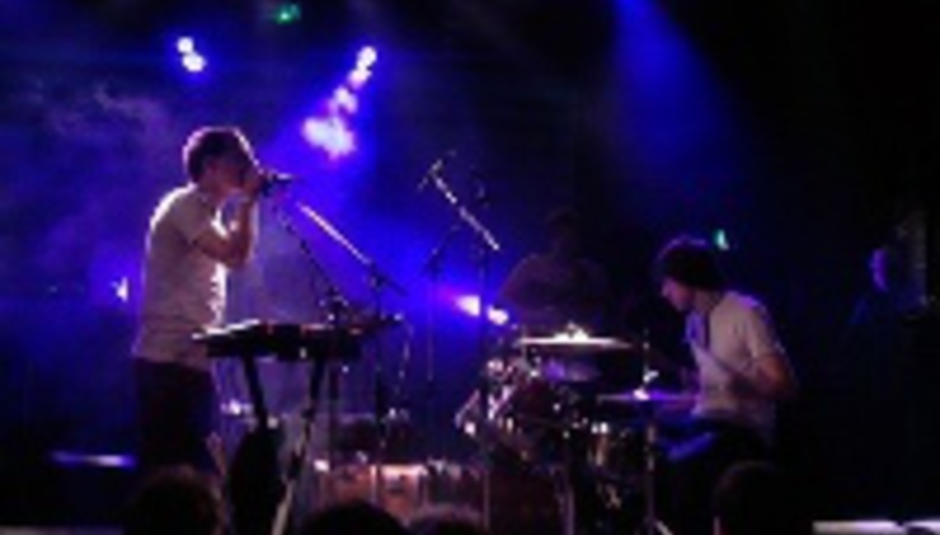 DiS heads to Utrecht for the two-day Le Guess Who festival, celebrating and promoting Canadian music, held at the city’s Tivoli venue. Check its website here for further information.

Are you wondering where the indie scene is in the Netherlands? Well, I can tell you now it’s not in Amsterdam. If you take a hop, skip and a jump down the train tracks, heading south, you’ll stumble upon the long forgotten helm of independent music in a moderate sized university town by the name of Utrecht. The venue? That goes by the name of the Tivoli, located just a few bounds down the Oudergracht, the oldest canal in the city.

As my lady and I walk into the Tivoli, the crowd – mostly millennium-age hipster teenagers in ‘80s second wave Reeboks and Converse – are standing slack-jawed, staring at the band on stage: Young Galaxy. Founded by ex-Stars touring guitarist Stephen Ramsay and Catherine McCandless, they are just one of the many young and amazingly gifted talents to come out of the ever-expanding Arts and Crafts label since its inception in 2002. Often compared to British shoegazers Slowdive, their sound is full of experimental melodies, expanding on their space-rock sound, pushing into what my lovely girlfriend dubs “psychedelic no-wave”. Their live show just adds to their wall of sound, and does not come lightly.

Looking around the tattered inner walls of the Tivoli, I notice old television monitors blinking promos for this two-day festival, and as the lights dim and the young ladies in the crowd start to scream their faces off, I can only think of one thing: “They misspelled Ottawa”. The research-savvy organisers dubbed it Ottowa!

On their last show of a six-month tour, Victoria-based five-piece synth-punk fan favourites Hot Hot Heat take stage, amid a classic Moterhead-esque riff, their black silhouettes against a piercing blue light. I can see that they are fully prepared to wow the crowd with their not-so-uniquely selected sound, and as they break into their first track, ‘Fashion Fight Pause’, from 2002’s Release Scenes One Through Thirteen, the band’s perfected stage show takes hold.

With jerry curl primed and leather vest shining, lead singer Steve Bays stands poised, striking a dastardly pose behind his instruments of choice: the keyboards. Their stage show down pat, the beats are timed perfectly to the lighting display, and the band curls through their 75-minute long set, rolling through their favourites with scientific ease.

But something bugs me about them. Yes, they’re masters of a catchy chorus, that much can be said. The kids in the audience lap it all up, but is there any substance? Their music seems so ineffectual that I am distracted by the dry ice that billows out of places unknown. And it seems as though I am not the only one – looking around, sections of the crowd seem unaffected by the band’s catchy tunes, which are so obviously void of any creativity. But HHH put on a good rock show nonetheless. If you aren’t a geezer, and as cynical about the music scene as I am, they just might be a decent enough intro into the rock/electronic amalgamation that is so prevalent these days.

With the second day of Le Guess Who underway, I know that Saturday is the day to be here. With convoluted scheduling and a tired mind, my beautiful partner and I skip the late bands on Friday evening (unfortunately missing out on electronic geniuses MSTRKRFT) as we know the likes of Julie Doiron , Caribou , Miracle Fortress and Black Mountain are sure to impress. This will be the day when all those Nederlanders, who may well have been unimpressed on Friday night, will no doubt be wowed by all that is Canadian.

Julie Doiron, once guitarist-turned-bassist for Eric’s Trip, is the first act of the evening. Set up with her lone drummer on the side of the stage, she takes a more subdued approach to the festival with her lyrically driven songs, singing sweet melodies about her children and love gone wrong. “We’re trying something new tonight,” Doiron states, as they step into a French-language tune which may or may not be off of her 2001 effort Désormais.

With a mop of hair strewn across her eyes, her strong, powerful voice has almost a commanding presence, with the crowd, at a limited number this time, stand open-mouthed, transfixed by her fuzzy guitars, ever-so-quiet vocals and sparse, melancholic songwriting. An altogether different detail I note is her drummer’s unique set up: with a jumper laid across the snare, and a lack of a stool, he stands up while he plays. It’s when Doiron whispers back, “Are you alright, Fred, without the kick drum?”, that I notice it’s not just the stool he’s missing, but the bass drum altogether. It may be her meekness that makes Doiron so charming. She is the quintessential Canadian musician: very humble and so grateful for the opportunity to play for those unCanadian.

The next band carries on a similarly subdued sound and comparable minimalism. Lightning Dust, side project of Black Mountain duo Amber Webber and Joshua Wells, have been playing together for many years as part of Black Mountain, but with so many ideas to spare, they have created a defining sound of sorrowful ballads backed by Webber’s subdued vocals.

But it’s Daniel V. Snaith who takes us for a most wonderful ride. The ex-Manitoba man has assumed the role of both percussionist and keyboardist (whilst occasionally popping in on the guitar) while fronting this, his latest creation: Caribou. His melodic progressions are comprised of rhythms that are light of touch, and so instrumentally smart that it’s no wonder he has been quoted as saying, “I’m not the type of person who takes physical things apart and plays around with them, but I like taking mental things apart and playing around with them.” (Linkage.)

As mathematically smart as he is technically accomplished (Snaith studied mathematics at the University of Toronto), the band has set themselves up mirroring each other: Snaith is across from the drummer at the front of the stage, facing the kit and its minder, while both guitarists stand behind them, facing the crowd. It’s a very strange set up, I find, for a truly original musical outing. Going by way of the post-rock avenue, long and seemingly never-ending choruses lapse from one to the next, reverberating so loudly that, even sitting on one of the many couches at the rear of the room, our eardrums still cower and shake in fear of complete decimation.

Taking stage next is Montreal-based indie rock band Miracle Fortress. Graham Van Pelt’s experimental recording project is just that: experimental. The skinny, wide-eyed, big-eared and big-mouthed front man awoos and awes with the best of them, reminding me of Hidden Cameras frontman Joel Gibb. Van Pelt and friends change and switch instruments like some strange version of musical chairs. Two percussionists provide off-timed rhythms and the band members move in sync with each other, like they’ve been playing together for years; keyboardist Adam Waito (of Telefauna fame, and sporting a fine pair of construction boots) stabs away on his keys while randomly fiddling with a series of pedals atop his instrument, producing a wide array of sounds unknown to the common man.

And now the headliners take centre stage. Black Mountain is merely the front band for a much bigger collective of musicians, artists and friends out of Vancouver that go by the title ‘BLACK MOUNTAIN ARMY’. Four of the members also work for Insite, an organisation helping the unfortunates of Vancouver’s east side (be they poor, addicts, or mentally ill) to meet the basic living requirements.

Incorporating Lightning Dust duo Wells and Webber (on drums and vocals respectively), the band is a five-piece, comprising Vancouver singer/songwriter Stephen McBean (regarded as the brains behind the operation) and fellow local musicians Matthew Camirand and Jeremy Schmidt. As one can tell from the onset, this lot are not just latching onto “another (Canadian) pop explosion”. They’re occasionally reminiscent of Tennessee quartet Kings of Leon, but exhibit modern influences like Queens of the Stone Age, with standout offerings recalling the influences of Zeppelin, Cream, The Rolling Stones and even a bit of Lou Reed and the Velvet Underground.

Black Mountain’s psychedelic set combines an innovative style of slow rock, stoner rock, or whatever you want to call it, and inwardly inspired tracks’ swoon about vocal lendings and ever so complicated instrumental collaborations. Their collectivist backgrounds shine through whole-heartedly, weaving through their different influences; their set seems more like an elongated jam session than a series of actual songs. But don’t get me wrong: they have a structured sound that lends to McBean’s songwriting genius, and the band’s varied experiences. Despite the altogether different sound that is presented on their self-titled album, if you’re into a bit of ‘60s- and ‘70s-influenced rock, they’re definitely a band worth checking out.

There’s one reason and one reason alone that makes these mini-festivals so popular: diversity. There’s something for everyone. From Hot Hot Heat’s poppy, synth-driven electro-rock,and Doiron’s melodic, swooping, vocally-driven harmonics to Daniel Snaith’s electronic, synthy grievances and Black Mountain’s slowly wailing repertoire, there really is something for all in attendance, whatever their tastes. We take the train back to Amsterdam chock-full of musical goodness. As the train lurches forth toward the city of winding canals and blatant gratuitousness, we let it all soak in, band by harmonious band.