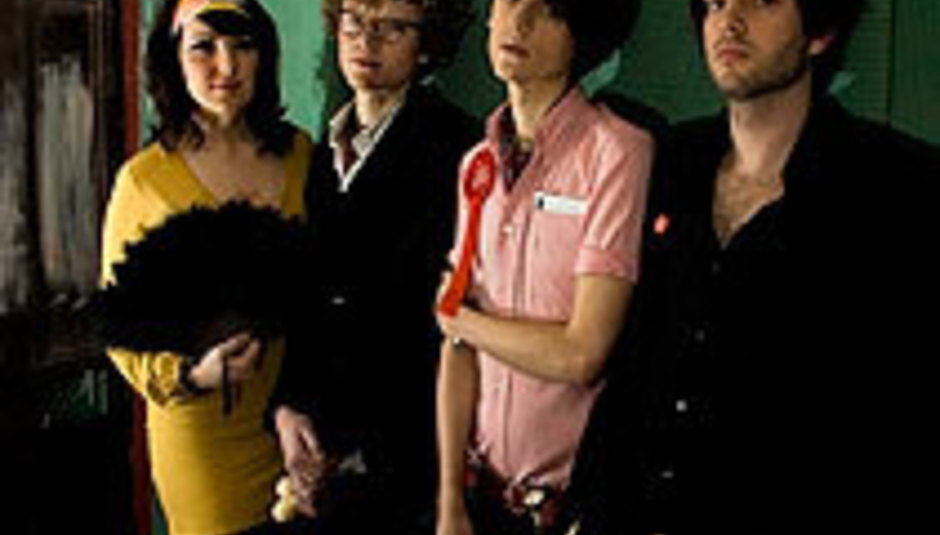 Pretty much anybody this writer has spoken to in the past few months will be aware of the existence of a Leeds-based quartet called Grammatics. Their five-track demo CD has scarcely left the stereo since it came into my possession at the end of May. And when I heard the results of their first proper foray into the recording studio ('Shadow Committee', released on October 22nd), I almost wet myself with joy.

Why? Because this is some of the most epic, intelligent pop music produced by a British band in an awfully long time. Clever lyrics twinned with intense melody, a heavenly noise awash with stabs of effect-soaked cello and electric guitar. And then there's that voice.

If, like me, you've been longing for a home-grown act that doesn't make you want to box your own ears until they bleed with their derivative lad-rock (The Twang? The Enemy? Really...), you'll almost certainly welcome Grammatics. They are:

DiS ventured to Leeds to put some questions their way...

When and how did you form?

Dom: Around April 2006. Owen asked me if I wanted to play drums in his new band [Dom and Owen met studying Music Technology at college] and I jumped at the chance. Then we enrolled Rebecca on cello, and Owen knew of Rory because he'd supported his old band [Colour Of Fire]."

Owen: "The seeds were really planted when me and Dom ran a club night called Grammar in York. That was October 2005. We spent a year running it, designing posters and DJing. We already knew we had a lot in common musically and that confirmed it - we'd watch bands together and think 'there's nothing here for us'. Every band in Leeds was stripped down, minimalist punk-rock. We wanted something a lot grander, I suppose.

So that club night is where the name Grammatics comes from?

Dom: Yeah. Owen originally wanted to call the band Grammar but I didn't like that idea. I suspect he came up with the name in the first place because he lives near Tadcaster Grammar School. Also, the word has intellectual connotations and we have a love of art and literature that we wanted to get across.

Owen: I remember Dom saying he wanted a classic English name. One of the first things we found out we had in common was a love of Blur, and the art-pop side of Britpop before Oasis came along and destroyed everything. It had to be a one or two syllable word, like Blur or Suede. I remember walking past the grammar school one day and thinking it just fitted. York's such a fucking cultural wasteland and we wanted the club to be a refuge for people like us - we believed they existed...

Dom: When we started the band we went through a list of quintessentially English names. The English Language was actually one of the names under consideration - and The Shipping Forecast, which ended up as a song title. After a couple of months arguing horrendously, we decided it'd be easiest to be called Grammatics.

The debut single's called The 'Shadow Committee' - why?

Owen: Well, it was going to be called 'Rhyme Scheme' [one of the track's key lyrics] until someone pointed out there's a little known Cursive song of the same name. In the end, we went into the mastering studio - where we shared a lift with Jimmy Page - minus a new title and had about sixty seconds to think of one. I searched through the drafts on my phone to see if there was anything we could use and found an old, unfinished song called 'Shadow Committee'. Dom and myself tried to put on an event in a graveyard once called 'Grammar's New Grave' - around the time of New Rave, ha ha - but the licence for it was turned down by the chapel's shadow committee. It seemed a really Gothic and cartoonish concept to me, I started imagining underground worlds and secret societies... mahogany wood panel and globe drinks cabinets. Miraculously, it fitted the song's theme perfectly.

I've heard you being described as an English Cursive. What do you think of that analogy?

Owen: I can think of worse things to be described as. We have a cello and we have jagged riffs, but I don't think I sing in a similar way to Tim Kasher at all. The Ugly Organ is one of my favourite records of all time, so I'll concede they've probably influenced our sound.

Another phrase I've heard in relation to your sound is 'emo'. What does that term mean to you and do you agree in any way?

Owen: I agree to an extent, yes. But I grew up listening to emo like Sunny Day Real Estate, Cursive - it's all so far removed from the current crop of 'emo' bands. It's better to take it in a good way rather than think, “Shit, people are comparing us to Fall Out Boy or Panic! At The Disco”. The term refers to such a broad spectrum now that it could really mean any band!

Did you have a particular sound, or maybe an aesthetic, in your minds when you started this band?

Owen: Definitely. We wanted to sound like an absolute mess, but a very controlled, calculated mess. We wanted it to be complicated, which was a difficult thing to achieve at first because we'd collected a group of musicians who were very out of practice in terms of playing live and with other people.

Dom: I think the first six months of this band were relearning our instruments, and the next six months were writing some songs and getting good.

Owen: It was also a case of learning to play the instruments in a different way.

Dom: Particularly Rebecca on cello. She plays it like a guitarist because her parts are written on guitar.

Owen: It's basically metal riffs played on a cello!

She's also, according to your MySpace, the only member of Grammatics without an attitude problem...

Owen: Rebecca's got more balls than the rest of us put together!

How does the songwriting process tend to work in the band?

Dom: Owen can come into the practice room with a fully-formed song he's recorded on his 16-track recorder, and we learn our parts - usually making changes along the way - or he'll come in with just a guitar riff or melody and we'll work from the bottom up and see where it goes from there.

Owen: It's funny, I think if we hadn't done Grammar for a year all our songs would have been a lot more straightforward. The advent of electro and the indie/dance crossover changed my songwriting - I was coming up with alt-country songs for a year before we did Grammar, then all of a sudden we were blasting out The Faint and !!!. That definitely influenced the rhythmic side of the band.

Dom: I'd say there's definitely a dance element to about 50 per cent of our songs.

After the single and October tour, what does the future hold for Grammatics?

Owen: We need to write more songs, but we never seem to get a minute to do so. The long term future, well, this single will decide that.

Can you see yourselves selling lots of records or being more of a cult concern?

Owen: Our music is purposefully leftfield to an extent in that it excludes a percentage of music listeners from being able to understand it. It's too complicated for Joe Public to be able to listen to it and get into it straight away. So, of course, we're never going to be as big as Editors or Bloc Party. On the other side of the coin we are a pop band and we're very melodic... we're a pop band that doesn't respect the verse-chorus-verse rules of pop music. But I believe the songs are really catchy, so that could sell us records. It's a tough call. I remember our manager saying to us, “I think this song and this song have the potential to be top ten singles”, and I just laughed out loud.

Dom: Would you be happy if they were?

Owen: Um, I suppose so. But when we wrote the music it was the most ridiculous thing we could ever imagine.

'Shadow Committee' is released on October 22 via Dance To The Radio, and can be heard on the band's MySpace. By coincidence (or, perhaps, design...) they play the following dates at the end of the month:

23 Newcastle The Head Of Steam