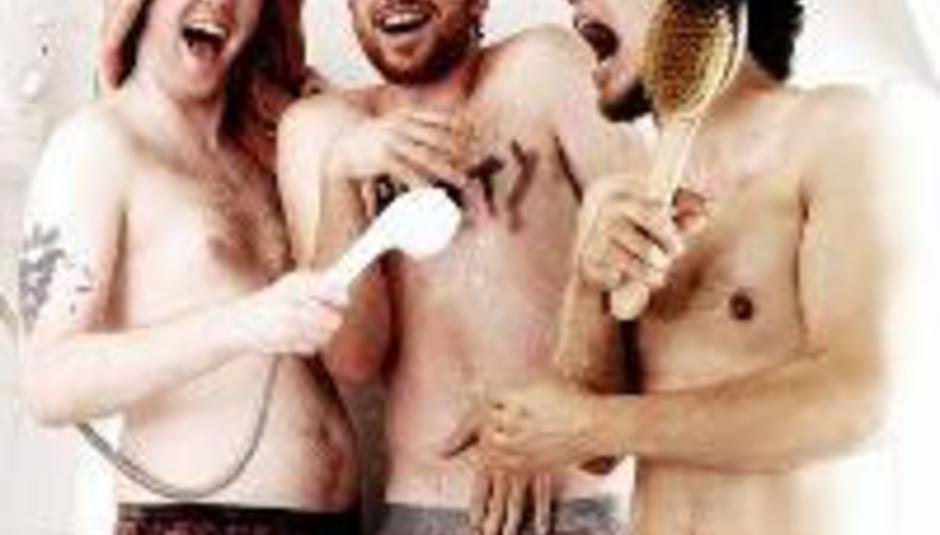 Making sense of London-based Cutting Pink With Knives' splutter-punk electro goofing is as much fun, and as infuriating, as attempting a top-level sudoku puzzle with your pants down in a bubble pool full of hula girls. Or. Something. Basically: it's super fun, super tough, super tasty, super deluxe, Brutal Deluxe, Speedball Too Fast Too Furious. It'll bludgeon yr skull in, drink the juice and pop a pot plant above your shattered brow.

Of course, such acerbic music can only be made by souls grounded and kind, men whose smiles are infectious and whose live performances tread the line between humour and horror quite excellently. Eddy (keys, guitar), Alex (bass, and the most recently acquired member) and Chris (vocals) are Cutting Pink With Knives; they're also happy chaps, talkative and amiable, into everything from the filthiest hardcore to the poppiest hip-hop. This month they release their second album, Populuxxe, via Holy Roar, the label Alex also co-runs (Label Profile here); a marked progression from their Oh Wow! debut, the long-player (or not so) is reviewed here.

DiS caught up with the band to talk their unpredictable influences, audience perceptions and brootal lasers…

Your second album is due out pretty dang soon – just how does it raise the bar following the splatter-core hysterics of Oh Wow!?

Alex: All the songs are just far better written. Oh Wow! had a great impact for a few listens, but when you start to dissect it, I always felt - as someone who wasn’t in the band at the time - that it essentially comprised of five or six good songs, and then a bunch of ‘ideas’ and noise. Populuxxe is clearly an album that flows, with every single song being just that – a song, each with a clear focus. Even if the songs are still all relatively short.

Eddy: I personally felt like a lot of the time on Oh Wow! we were throwing in blastbeats and whatnot in order to conform to some expectation of what a 'grind' band should be, and I think that was often to the detriment of the songs themselves. I also think Oh Wow! was too caught up in taking itself over-seriously at points, trying to be emotional or whatever so that people would take it more seriously; all of those things are defence mechanisms against criticism and judgement, and I think with Populuxxe we've become a LOT more comfortable with who we are and how our music works best. We're good at writing super-concise pop songs and being as catchy as possible, we're never going to be as heavy or fast as AnB or Discordance axis, so we have to be what we are: pop music sell-outs. To me, this album is just a lot truer to who are. If we'd made a heavier album just to keep fans or avoid criticism, that would've been selling out.

While you’re regulars on the hardcore circuit, there’s a ‘danceability’ to your arrangements that has its roots in chart-friendlier material – do your influences vary to the degree where you own disco records beside your punk releases?

Alex: We have probably played with as many electronic acts as ‘hardcore’ bands, and we certainly don’t want to just play with heavy bands. We actually would feel much more comfortable playing with a band such as Polysics right now. It’s probably almost ironic, now we are on a much more ‘rock’ label, that we want to play with a much wider spectrum of bands and artists. But to answer your question: collectively we have as much of a love for Spank Rock, M.I.A., MF Doom, Justice, DJ Mehdi, A Flock of Seagulls and Prince as we do for punk and hardcore.

Eddy: All of us love dance and electro, from Kraftwerk through to LCD Soundsystem, which has obviously had its impact along with the more obvious post-punk (Big Black, Replacements, Husker Du, Gang of Four) influences, but I think what’s most important is that we're all humble enough to recognise a fantastically written pop song; we're not going to be some über-scene holier-than-thou bunch of punk-purists, and we do genuinely love pop. I love ‘60s French pop and I've got tons of Avril Lavigne, Kylie, Cameo, all o dat, and I can play so much Mariah Carey on the piano it’s untrue. And I can hit those fucking high notes like a champ.

Chris: In all honesty, I don't listen to anything extreme AT ALL anymore, literally nothing. I mean, I did, but I just think ‘extreme’ music has become so one-dimensional and I don't really have the patience for it anymore. There are so many bands, and to me none of them will ever be able to top the ‘80s hardcore scene because of Bad Brains, or the west coast Bay Area scene of the early ‘90s, i.e. Antioch Arrow, Heroin, Angel Hair, etc. I'm pretty much just addicted to bad R&B and hip-hop.

Alex: Chris is lying – he still likes, and listens to, Pig Destroyer.

CPWK shows are regularly dominated by smiling attendees – do people find you funny, do you think? Is there a degree of humour in the band’s material, perhaps in its execution, that rubs off on an audience and makes the band that bit more endearing than so many grindcore or whatever also-rans?

Alex: I don’t think there is an overt sense of humour in our material. Whilst Oh Wow! had silly song titles, but this was just down to laziness with coming up with them. Musically and lyrically there is a distinct lack of negativity; everything is in major chords, happy and energetic sounding. We want people to smile and have fun when they listen to us and see us, and we do joke around a lot live – but we do hope that the songs, for those that take the time, speak for themselves. I think we work on a fun level for those that want that, and on a more emotional, personal level for people who want to delve a bit deeper. Grindcore is essentially very silly, but we are not grindcore, even if that was an initial influence, and we can laugh at ourselves. That’s probably the difference.

Eddy: I don't think the material itself is funny, it’s just fun. We're not dour, grim arseholes, so why would we try to sound like The Cure? I love The Cure, I'm just a happy person, so I write songs to make you smile and dance to. I'd much rather hear ‘Walking On Sunshine’ than ‘Funeral Party’ on a day-to-day basis. And we like to have fun live. Sometimes it gets a bit like panto, but I'd rather we made you smile than weep. There’s too much morbid music out there as it is, so if we can try to be the antidote to that and not compromise our music, I'd be pretty happy with that.

Chris: Sometimes I stop and think, “God, I sound like an asshole", on stage. And then I remember that I'm ON STAGE, and anything that happens on stage isn't reality. If anybody takes me seriously on stage, I make it a point to annoy them as much as possible while we play, without being a prick. When a crowd looks bored I get bored - and I'll do anything to get them to react, even if that means compromising being cutesy or cool. I just hope no one takes me seriously.

Is it difficult, Alex, balancing the running of a label with being in a band ON that label? Obviously you can’t be seen to be favouring your own act over other acts on Holy Roar… why not put the new CPWK out through another label?

Alex: No other labels were interested and I was stupid enough to do it! Seriously though, I really, really wanted to release Oh Wow! before I was in the band, but ADAADAT beat me to it. Luckily the chance arose for me both to join the band and to put out Populuxxe. I think this history to the situation gives me a bit of perspective, hopefully. I honestly feel like I’m both in and get to work with one of my favourite bands. It is a difficult balancing act, and I’m sure I have my cynical detractors out there, but I will never favour CPWK over other acts on the label – each band on the label is like one of my own children. Finally, as a moot point – I think if it’s okay for Aaron Turner (Isis) and Jacob Bannon (Converge) to release their own bands on their labels, then it's okay for me.

What’s forthcoming tour-wise? Are you ale to tour ‘properly’ now, or are gigs squeezed into weekends and holiday time. Just how far can a band like CPWK potentially go – is international touring so far-fetched an idea?

Alex: We have lots of scattered dates between now and the end of October. We should be doing a full tour in November, too. We would love nothing more than to tour properly all the time, all over the world. I think we are potentially taking small steps right now towards this becoming somewhat more of a reality, but obviously it depends upon a lot of factors – money and paying rent currently being a big one. We really want to see how far this can go.

Are lasers cool? Is the new Transformers movie cool? Are robots with lasers, basically, awesome?

Alex: No. The Transformers movie was a let down. Although the girl in it was hot. Dog-bots are cooler.

Is swearing funny? Does it tickle Tom Robinson’s fancy? When’s the last time someone tried to whack one of you at a show? Do you think you tread a fine line between being FUN and being in-yr-face confrontational?

Alex: Of course swearing is funny, unless you are a miserable cunt. Tom Robinson is the uncle I never had, so he loves it - the dirty old puppy. People pretty much hit us at every gig we do. And yes, we do tread that line unfortunately. We are not trying to be confrontational - we would much rather just have fun all the time - but if people are going to be dicks to us, why should we just sit there and take it? None of us are very good at hiding how we feel! They could just not watch us if they don’t like it!

Eddy: Chris almost got smacked with a pool cue for yelling, "Hey, people playing pool, TOUCH MY DICK!" at some metal heads. I would've smacked him. He's a fucking paedo’ prick. I think the line we tread is that WE'RE having fun, and being in YOUR face.

Populuxxe is released on September 24 and is reviewed here. CPWK play with Lovvers and Meet Me In St Louis at London's Barden's Boudoir on September 27 (details), and further forthcoming live dates can be seen at their MySpace page, here.