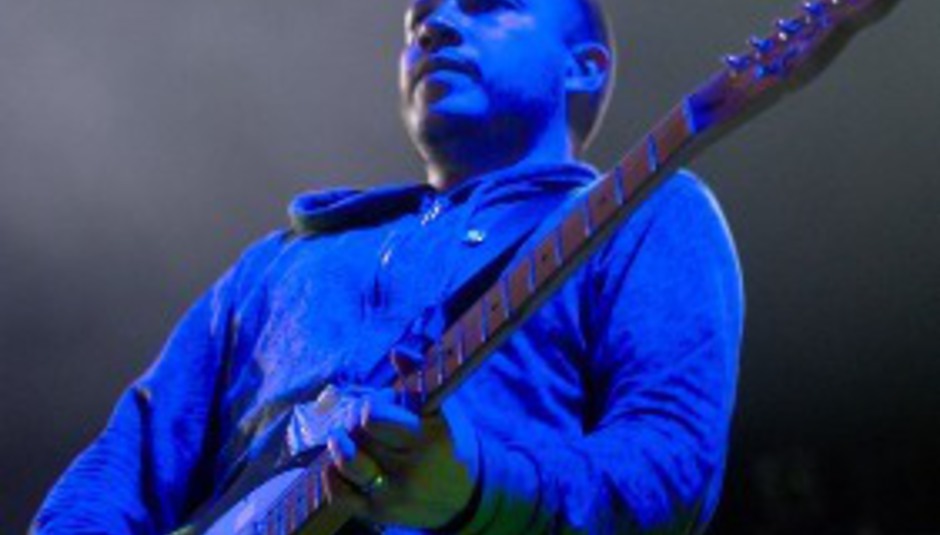 Mogwai on their new album, festivals and the sending of sh*tty e-mails

Mogwai on their new album, festivals and the sending of sh*tty e-mails

We think it’s safe to say that every DiS reader has an awareness of Scottish five-piece Mogwai. The primarily instrumental outfit have been in business for over ten years, and have released six albums including the soundtrack to 2006 motion picture Zidane (yes, they like football). The band’s last album, last year’s Mr Beast, split opinion upon its release, but returning to it recently it seems obvious that the band have prioritised progression over immediacy. It’s a worthy successor to the also very-good-actually Happy Songs For Happy People, their ‘Hunted By A Freak’-spawning long-player of 2003.

Now back into the recording cycle, Mogwai have just one domestic live show lined up, at the Connect Festival in Argyll, Scotland. They previously performed at both this summer’s Supersonic in Birmingham and the Versus The Fans ATP event at Minehead Butlins in May – reviews here and here respectively.

DiS caught up with Mogwai’s Stuart Braithwaite (pictured; the band is completed by Barry Burns, John Cummings, Dominic Aitchison and Martin Bulloch) just after he returned from the walking of his dogs. He informs us that his new neighbours also have dogs – we fear for the serenity of the two households.

So Connect is all you’ve got lined up on the gig front – I guess you’re hitting the studio soon, then?
Pretty much – we’re in the studio all of September, and we’ve been doing some festivals in the summer just to keep ourselves busy and feel as if we’re not unemployed. After Connect we’ll be going back to recording the new album.

And how’s it coming along? Got much down already?
We’re getting there – we’ve done like four songs, and we’re looking to have it all finished before the new year, so if all goes to plan it’ll be out early next year. We pretty much toured for a year after Mr Beast, and then went back to writing new music. We’d have probably been further along with the new album if we hadn’t played at all this summer, but we were asked to do some things that seemed interesting.

Totally – I saw you at Supersonic in Birmingham, and I know its organisers had been trying to get you to play for some time. How does a small, ‘boutique’ event like that compare with a much bigger, more mainstream festival like Connect? (The connect bill includes Primal Scream, Björk, Beastie Boys and LCD Soundsystem, among others.)
Supersonic and Connect, to be honest, are both pretty good examples of festivals. Connect is much bigger, but I think there’s some care put into the line-up. I mean, we’ve played some really horrible festivals over the years, where we’d finish and the options would be going to watch either Paradise Lost or Placebo. So I really enjoyed Supersonic – it was great, and I saw some really excellent bands. The people that book it all are great. So yeah, both Connect and Supersonic are great events.

And you’ve played All Tomorrow’s Parties a few times too. Does it have a special place in the band’s collective heart?
ATP is one of the best festivals around, and since we were involved around the start of it we’ve got a close connection with it. I thought the most recent one – that the fans picked – had a tame line-up when compared to the events that the bands pick, but maybe that’s just because bands are masochists! The new site is good, too, and it’s always nice and relaxed down there. It’s been a wee while since I’ve been to a bigger, ‘proper’ festival as a customer, but at ATP they always seem to look after people, and there’s nobody there to steal your tent or anything. Although if global warming continues to get worse I guess Butlins will wash away.

It is a big tent, I guess. Anyway, the new record: when starting a new album, do you dwell at all on the reception of the one preceding it? Mr Beast did split opinion, rather…
We don’t really think about one record’s reception before starting a new one – we just try to make music that’s as good as it can be, and if we compared everything with what we did before we’d probably drive ourselves mad. We don’t quite work from a clean slate each time, as we each bring elements into the studio. That’s where a lot of the songs come together, though – on the last couple of records there were arrangements that I thought would be scrapped, because they were rubbish, but then others added ideas in the studio and the pieces turned out really, really great. When I play those songs now I can still remember how they used to sound so fucking simple and crap, but then something is added and they’re great. Then again, you can think some songs are going to be the best songs ever early on, and then they turn out to be not that good and we abandon ‘em. We never really form an opinion on songs now until they’re finished – a lot can happen between the start of recording and the finishing of the mixing.

And does making a breakthrough release, as you did with your second album Come On Die Young, heap pressure atop you to always stay ahead of the game, as it were?
The pressure to progress is a good pressure, but the real pressure falls upon ourselves, as we have to justify why we’re still doing this. We realise that… this is hard to explain, and I don’t know if I’ll manage… We realise that we have to do things interesting, but that what’s interesting to us at a time doesn’t necessarily make for a good record. If you do things in the right frame of mind, with a bit of imagination, they usually turn out pretty good.

That’s something that critics would say a lot of post-rock acts lack: imagination. Do you think that the genre has become a little stale, perhaps, due to a rash of bands quick to ape the sounds of CODY and similar albums of that time?
There are a lot of bands inspired by us, obviously, and some are better than others, but that’s not so bad. When we started we were just pretty much a carbon copy of The God Machine and My Bloody Valentine, but after six months we sort of found our own feet, and that’s what’ll happen with bands influenced by us. They might start out sounding like us, but then they’ll grow. With any kind of music – music that people can get into, and work out – there’s going to be copyists.

Do you think it’s bad, then, that some instrumental rock acts aren’t given a second chance, the time to progress and evolve?
I think if you’re doing something interesting and different then people are going to notice. I was having a conversation with someone, someone who will remain nameless, and he said there was no point in bands making instrumental music as they’d just sound like Mogwai. I was like, that’s a ridiculous thing to say, the most ridiculous thing I’d heard in my life! Music, until fairly recently really, has been mostly instrumental, so saying that all new instrumental music will sound like our band, a band that only started ten years ago in Lanarkshire, is totally demented! I think a lot of people into indie music probably got into us and Godspeed You! Black Emperor first, but there’s no reason to go thinking that’s all there is. I mean, Errors are instrumental, but then you’ve got bands like Black Dice and Growing who are taking it in wholly different directions. I think that’s good, but maybe in five years’ time every band will be trying to sound like Black Dice.

Or Growing, maybe. Both Errors and Growing are on your Rock Action label – how’s that doing right now?
Rock Action is going well, and Errors are doing especially well. Everything else sort of rolls along, but Errors are building some genuine excitement. They’re going on tour with Underworld soon, and they’re getting offered things that usually would only go the way of your ‘buzz bands’. They’re doing a show up here with Calvin Harris, too.

Yeah, I heard about that… bit of an odd pairing…
You don’t like him? I think people that like him would like Errors, but I don’t know. He sent you a shitty e-mail…? What did he do? Did you give him a bad review? (Yes. And the man did indeed send me a shitty e-mail afterwards.) Oh, he’s my wife’s friend’s boyfriend – I don’t know him that well, but he seems a nice man. But why would you bother e-mailing someone about a bad review? It’s a bit of a sign of insecurity, isn’t it? I mean, the guy’s never off the telly – why’s he bothered about what’s written on a website? It’s insane.

Do you think acts should go looking, proactively, for reviews of their work?
I don’t think artists should go looking for their reviews, no. If I ever read a [negative] review of ours, the first thing that comes to mind isn’t, “Oh, I’m going to e-mail this person”. I just figure the guy doesn’t like the kind of music we make. No bother.

You say that, but Barry’s posts on your website (link) often take humorous swipes at the great and not-so of the music world…
Well, Barry can be a little excitable sometimes, but even he doesn’t get too bothered. I dunno… I actually used to be the worst one for getting annoyed, and making these acerbic comments. I probably got a bit carried away, and thought that people might listen to any old crap I had to say. I mean, I’ve never been an aggressive person, y’know, not at all. I think, as well, when we first started the band we were young and really passionate about music that we liked, and discussions that you’d usually have with your mates in the pub would sometimes spill into interviews. We’d just say exactly what we thought, whereas now we’re a little more sensible. Once I did write a shitty comment on a band’s MySpace, and they put it out as a press release. I was mortified, and I e-mailed them to say sorry. Turns out the people in the band really liked Mogwai, and I felt really embarrassed. But there y’go.

Mogwai play at the Connect Festival, Scotland, in September. For full details, click to the festival’s official website, here. For more about Mogwai and to hear music, click to their official MySpace page, here.